Out here on the plains of Canada it is windy and rainy. I’m in Winnipeg for the night, staying at a hotel across the street from the airport. 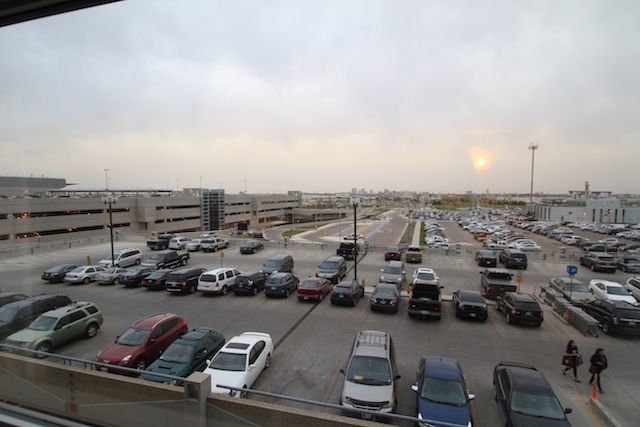 View from my hotel room. Isn’t it lovely?

This was the first time I’ve flown alone since Anders was born. I got a lot of knitting done, read a cheesy magazine and befriended and Winnipegian. He gave me some tips for what to do in Winnipeg, but I’m tired and hanging out at the hotel instead.

Tomorrow afternoon I fly to Churchill, the Polar Bear Capital of the World.

Want to know more about Churchill? I stole this from Wikipedia:

Churchill is a town on the shore of Hudson Bay in Manitoba, Canada. It is most famous for the many polar bears that move toward the shore from inland in the autumn, leading to the nickname “Polar Bear Capital of the World” that has helped its growing tourism industry.

Churchill has a subarctic climate with long very cold winters, and short, cool to mild summers. Churchill’s winters are colder than a location at a latitude of 58 degrees north should warrant, given its coastal location. The shallow Hudson Bay freezes, eliminating any maritime moderation. Prevailing northerly winds from the North Pole jet across the frozen bay and chill it to a â26.7 °C (â16.1 °F) January average. Juneau, Alaska, by contrast, is also located at 58 degrees north but is moderated by the warmer and deeper Pacific Ocean. Juneau’s â3.5 °C (25.7 °F) January average temperature is a full 23.2 °C (41.8 °F) warmer than Churchill’s. Yet in summer, when the Hudson Bay thaws, Churchill’s summer is moderated. Churchill’s 12.0 °C (53.6 °F) July average temperature is almost the same as Juneau’s 13.8 °C (56.8 °F) July average.

In recent years, the town has developed a sizable tourism industry focused on the migration habits of the polar bear. Although there are more reported bears than people in Churchill, this claim has been disputed and challenged by the large presence of other animals as well.

Tourists can safely view polar bears from specially modified buses known as tundra buggies. Use of the buggies helps sustain local tourism, but can also cause damage to the local ecosystem when driven outside the established trails. October and early November are the most feasible times to see polar bears, thousands of which wait on the vast peninsula until the water freezes on Hudson Bay so that they can return to hunt their primary food source, ringed seals.

I’ll have my own words to share with you once I get up there.