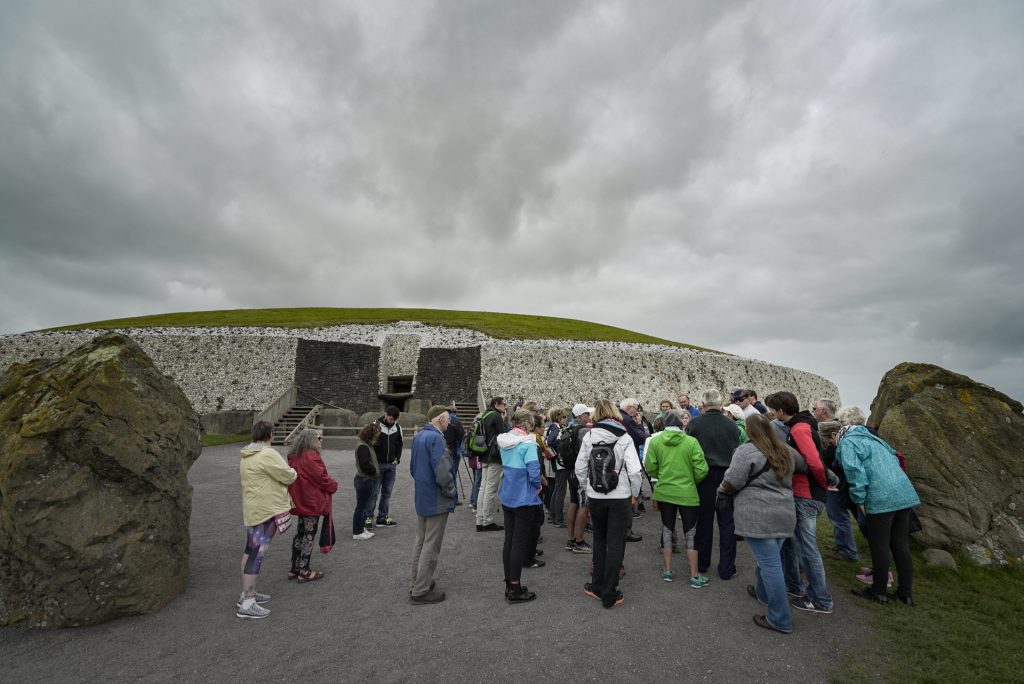 This article will help you plan your Bru na Boinne tour to Newgrange passage grave and Knowth passage grave in County Meath, Ireland.

While watching a film at the Irish National Heritage Park in Wexford, Ireland, I saw footage of the Neolithic passage tombs of Newgrange, Knowth, and Dowth. Normally, I do a little research before we get to a country, but I think I am wiped out from almost a year of logistics and constant research and planning. Henry has been more on top of it than me in Ireland, but I basically rented a cottage and showed up. The film convinced me I wanted to take a Newgrange day tour.

There are so many interesting archaeological sites in Ireland, as well as the natural beauties, and several of these Ireland landmarks are in County Meath, north of Dublin. Many people take Newgrange tours from Dublin (more on that below), but we rented a car and drove the 2.5 hours from Gorey, Ireland to the Bru na Boinne Visitor Centre where you start your tour of Newgrange and Knowth passage tombs. (Dowth passage tomb is nearby, but un-excavated and not set up for visitors in the same way Newgrange and Knowth are.)

Tip: The Irish National Heritage Park was great. Add this to your Ireland list!

What is Newgrange? (And Knowth and Dowth)

Newgrange, Knowth, and Dowth are ancient sites in Ireland situated near the bend in the River Boyne. These three prehistoric burial mounds, along with forty satellite passage graves, make up the Brú na Bóinne complex. The sites are recognized as having great ritual significance and are part of a UNESCO World Heritage Site.

Newgrange is one of the most famous landmarks in Ireland because visitors can still enter the chamber and because it is aligned with the winter solstice sunrise, which shines past the stone entrance and lights up the back chamber.

This is also Europe’s most important and highest concentration of megalithic art, with the majority of the rock art at Knowth and some stunning displays at Newgrange.

How old is Newgrange? (And Knowth and Dowth)

Megalithic. Neolithic. What does that mean? How old are the sites at Bru na Boinne? Newgrange, Ireland’s best known passage tomb, is about 5,200 years old — dated to around 3200 BC, making it older than either Stonehenge or the Egyptian pyramids.

Knowth passage tomb is also about 5,000 years old. It was likely built after Newgrange, but before Dowth.

Where is Newgrange? (And Knowth and Dowth)

All three Neolithic sites are in County Meath in the Boyne Valley Ireland. The area is known as “Ireland’s Ancient East.” It’s about 40 miles north of Dublin.

Newgrange and Knowth are accessed through the Bru na Boinne visitor center.

Who built Newgrange? (And Knowth and Dowth)

As I mentioned above, Neolithic, or stone age people built these burial mounds of Ireland. They are simply known as “passage tomb builders” or “stone age people.” Somehow, they got these giant rocks, the “kerbstones” that surround the mounds, from up river many miles. They builtthe passages and then mounded a lot of dirt on top. These were people who farmed in the area and had an organized society on the bend of the Boyne River.

When you arrive at the visitor center, you will be assigned Knowth and Newgrange tour times for the buses. You’ll take one bus to Knowth, take a one-hour tour (35 minute tour + 25 minutes on your own), then return to the bus stop and get on another bus to Newgrange. The Newgrange tour is the same set up as Knowth. We found that it wasn’t enough time as our bus arrived a little late and the tours ran a little long. There isn’t a way around this, though, unless you walk back from Knowth (4 km) or Newgrange (7 km). 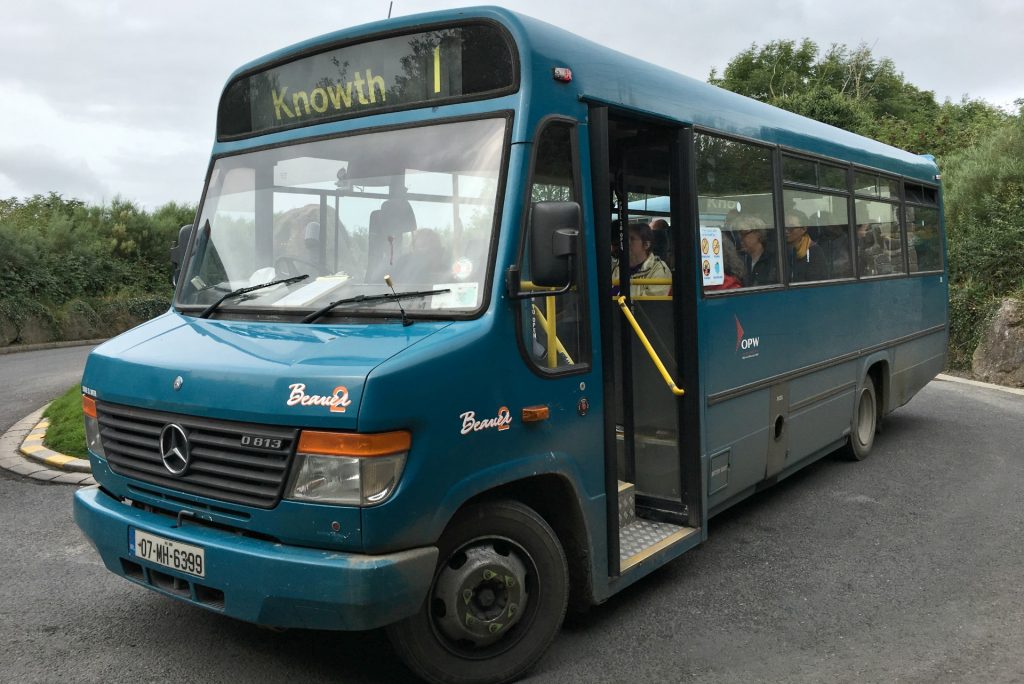 Tip: Know how you want to spend your time. We didn’t and felt rushed all around. I recommend getting your first bus time for an hour after you arrive. That way you can check out the visitor center, get something to eat in the tea room, use the bathrooms, and give yourself ten minutes to walk to the bus stop. Then do both tours and plan on eating or spending more time in the visitor center on your return.

Knowth is open this year (2017) from April 1st until November 1st inclusive.

Tip: Get there early in the day. Tours fill up and the only access to these two sites is through the visitor center on a guided tour. Newgrange booking is only for groups of 15 or more (and it’s required). 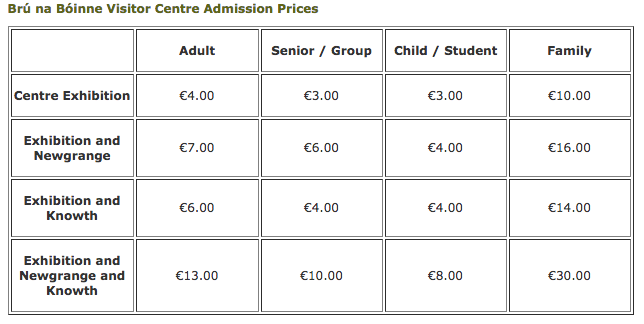 Tip: We were lucky enough to discover that entrance to the monument is free on the first Wednesday of each month.

This is both the Newgrange visitor center and the visitor center for the whole area. You must go through the visitor center to get to either tomb. Fortunately, it’s a pretty cool visitor center. The building construction mimics the round tombs and the displays and video will prepare you for your visit. We loved the scale model of the passage of the Newgrange tomb. And the gift shop has lovely Aran sweaters, lots of great books and all the touristy stuff you could want. There is a tea room/café and restrooms.

You don’t have to go to the gift shop, click through Amazon book choices for Newgrange and Bru na Boinne. Books for adults and kids.

One of the things Newgrange Ireland is most known for is its alignment to sunrise on the winter solstice. At dawn from about December 19-23, a narrow beam of light shines through an opening above the passage door called the roof box. The light extends the length of the passage and lights up a burial basin in the back alcove. It lasts for about 17 minutes. This was likely the beginning of the year for the people who built this tomb/temple.

If you want to experience a Newgrange solstice, you can enter the lottery and hope to be picked. They don’t guarantee the sun will shine on the solstice or pay for you to get there, but we entered anyway. How amazing would it be to be in the Valley of the Boyne and see the sun shining through the roof box in Newgrange from inside the passage? Pretty amazing.

To enter the lottery, fill out an application form in Brú Na Bóinne Visitor Centre or send your address, telephone number, and whether or not you have ever visited Newgrange by e-mail to brunaboinne@opw.ie.

What To Bring to Bru na Boinne

It’s Ireland, so there is a good chance it will rain. Or be wet, because it just rained. You will be outside most of the time, so be prepared for any weather. 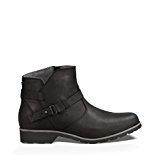 There isn’t anywhere to get food once you leave the visitor center, so if you need to keep energy levels up during the two hours of tours, pack something easy to chomp on and some water.

If you don’t have a car, never fear, there are lots of options for Bru na Boinne tours from Dublin. Operators of the Dublin day tours can pick you up at a cruise ship or around the city. Visiting Newgrange and Knowth or a Hill of Tara tour are some of the best day tours from Dublin.

Things To Do Near Newgrange

If we didn’t have such a long drive to get to Newgrange, I would have liked to check out some of these nearby spots.

Hill of Tara – Home of the high kings of Ireland. This archaeological complex is home to several ancient monuments.

Battle of the Boyne – The site of the 1690 battle between the forces of the deposed King James II of England and those of Dutch Prince William of Orange.

Hill of Slane – The site where Patrick (later Saint Patrick) lit a fire, while across the way Pagans were about to light their own feast day fire. It was said if they didn’t put out the missionary, Patrick’s, fire, Christianity would take over Ireland.

While we were in England we visited Stonehenge and Avebury standing stones. 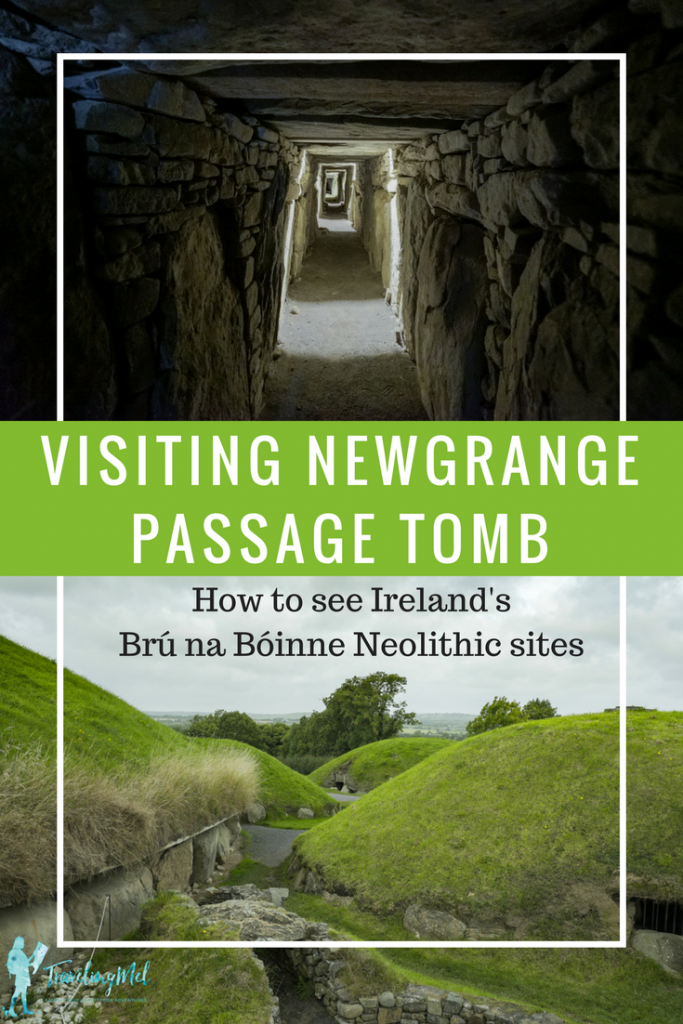