How about another sappy dog post? What do you think; will you indulge me? Surpriseits not about Rigby (although he is cute). 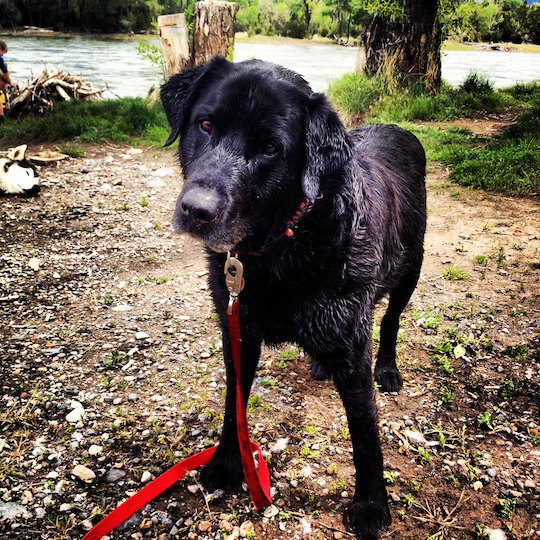 Hawks and crows are riding thermals overhead while I sit next to the Yellowstone River. Swallows dart over the water hunting insects. Rigby sleeps in the foreground while the boys build mud villages along the rivers edge. Diesel whines and cries in frustration and excitement until he can pry a stick out of a dam. He tosses it downriver in a one-dog game of fetch. If he cant coerce someone with his cuteness into throwing something, hes happy to do it himself. Diesel swims after the stick, then runs back up with it to start again. Later today, hell be so sore he can hardly move, but right now, he is doggone happy. 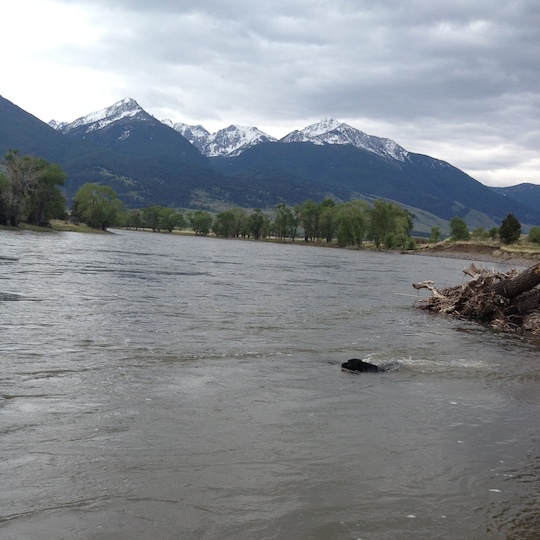 “I love you so much, Stick. I’ll do anything to save you.”

I write a lot about Rigby, my old friend who had been in my life for over ten years. But we have another dog. Diesel, as his name implies, is jet black and usually shows up as negative space in photos. I sometimes treat him that way. He’s “Henry’s dog” or “the other dog.”

People choose dogs to match their personality, or at least we did. I picked a pup who was an independent thinker, had great endurance, loves the wild and doesn’t need a ton of attention. We differ on our love of carcass, but you can’t have everything. Rigby wants to be in the same room as me, but on the other side of the room.

Henry chose a buddy who is loyal, high energy, and infatuated with affection. Diesel doesn’t just want to share a room, he wants to share a space. Where Rigby is driven by stomach and wanderlust, Diesel is driven by his heart and the constant drive to fetch. 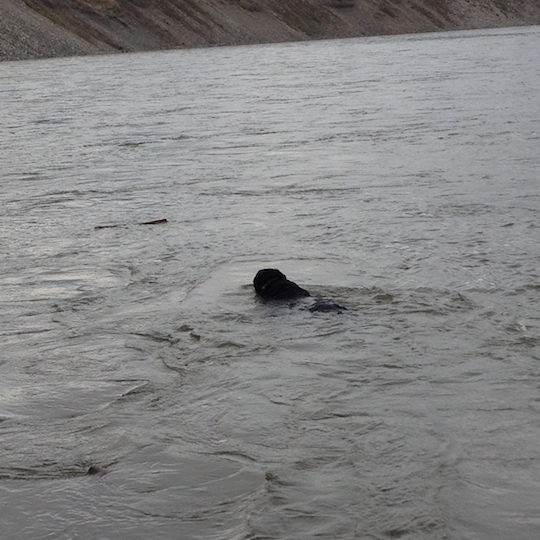 I love you so much, Stick. I’ve almost got you.”

Diesel has more love than any creature I’ve met and he can’t wait to give it to you. And by “you” I mean anyone that halfway looks at him. H is his favorite, but he wouldn’t turn down attention from anyone.

He’s not the smartest dog, but he is dedicated and enthusiastic. Today he followed a stick down the river and tried to get out in a place with a too-steep bank. I couldnt convince home to swim a bit further downstream until I threw another stick for him to chase.

He’s a great dog for a campsite or hanging out outside. I never worry that he is going to wander or that Ill have to spend half an hour looking for him, only to find him at someones BBQ pit. As long as there is a stick, and that dog can always find a stick, he’ll stay nearby. If you tell him to sit, or heel, he’ll almost always do it.

And though he is the sweetest thing, if you walk in our house and he doesnt know you, hell go ape-shit-crazy, barking like the scariest dog in the world. Then, hell want some petting. He makes me feel safe when I am home alone, because no one with bad intentions would dare pass him. If Rigby could be bothered to get up, I hope his wolfy appearance adds to the deterrent.

Like Rigby, Diesel is getting old. He’ll be 9 next month. (July 17, if you want to start your shopping early.) His head and heart are puppy-like, but his body is an old dog’s. These days he is sore after almost every walk and an hour playing in the river leaves him immobilized the rest of the day–sometimes into the next.

It won’t be long before we are a one-dog or no-dog family. I won’t miss the fur, the poop on the floor, the commitment to walk them every day, getting whacked with a tail, or the hassle of getting them taken care of when we go out of town, but I will miss those big hearts. And Ill miss Henrys dogs big Lab grin and abundant love. 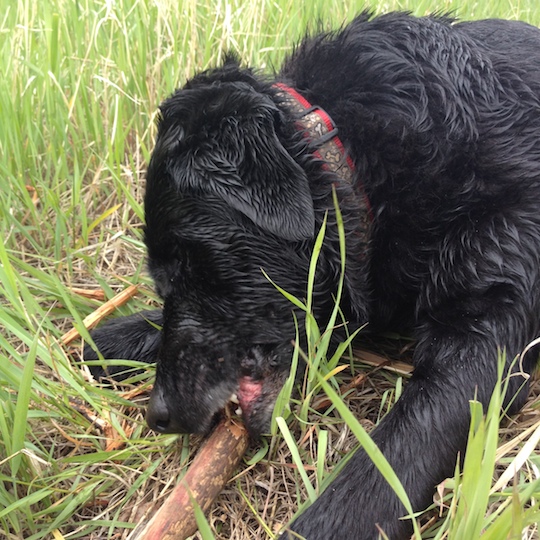 4 thoughts on “The other one”