Since it is zero degrees out right now, I’d like to reminisce about a warm September day. It was in the 60s, skies were blue, kids were in daycare and Henry and I paddled down the Yellowstone River.

The canoe has been sitting in our driveway for years and the two of us have never taken it out together. I was working on a story about the Paradise Valley and wanted to do some “research.”

We drove to Mallards Rest to put the canoe in, figuring we could hitch hike back up from Carters Bridge when we were done. These are the times we wish we had two vehicles, but we figured we could work it out.

We paddled past cottonwoods in shades of gold and umber. A light haze filtered the sky from a the Antelope Fire in Yellowstone. Henry fished a bit and we chatted and laughed as only a momentarily childless couple can.

We stopped for lunch on an island and shared an avocado filled with black bean/tomato/onion salad. 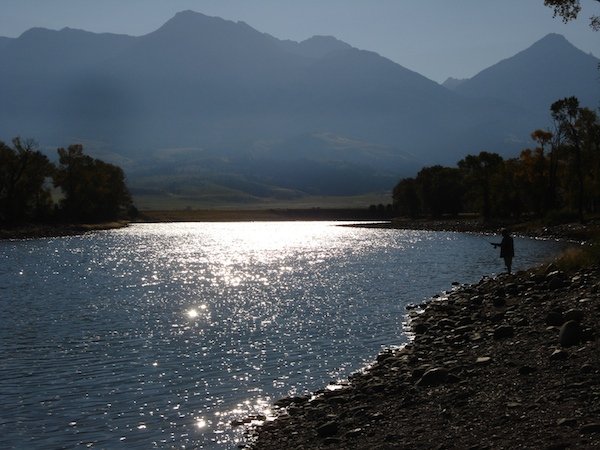 The put-in at Mallards Rest. 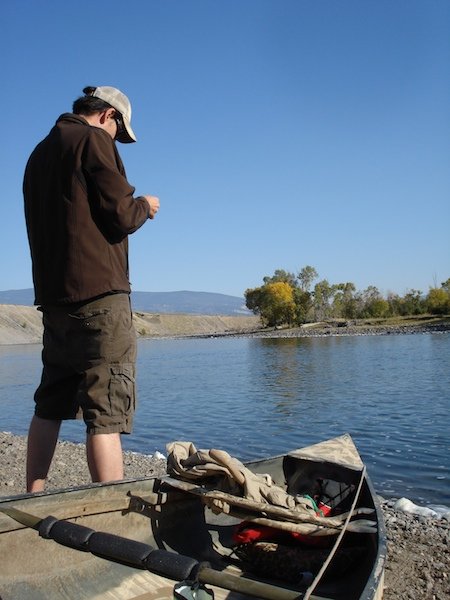 Tying a fly to the line. 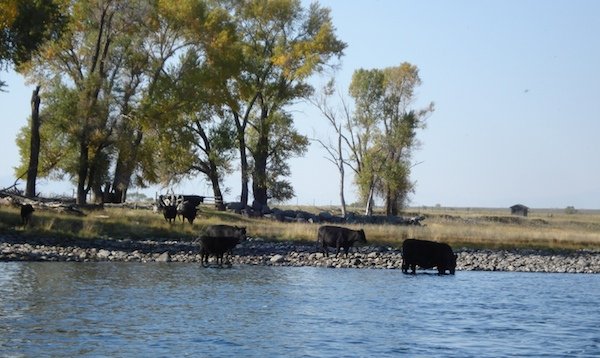 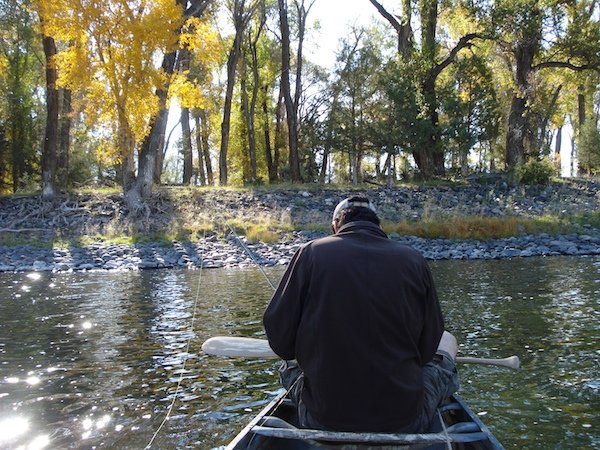 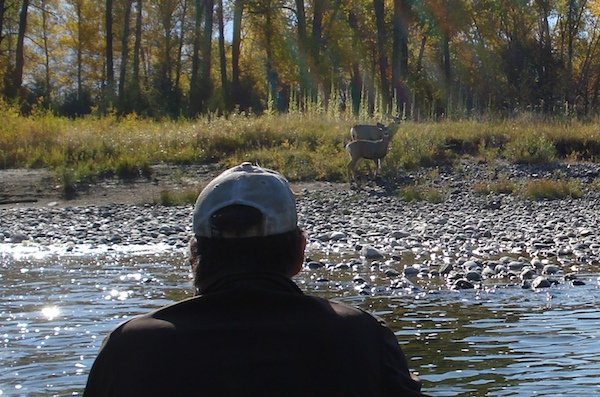 A couple of does. 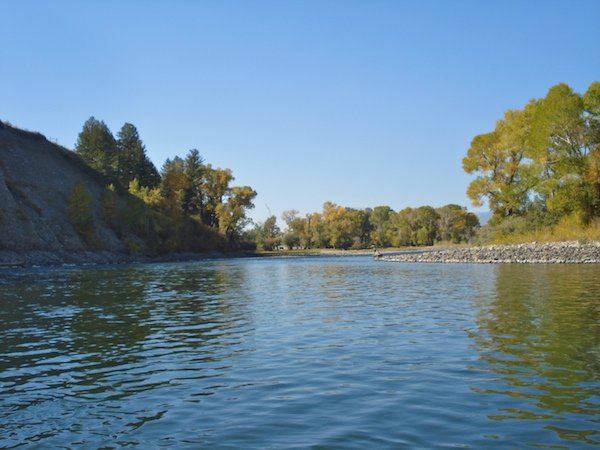 Such a tranquil scene. What could go wrong? 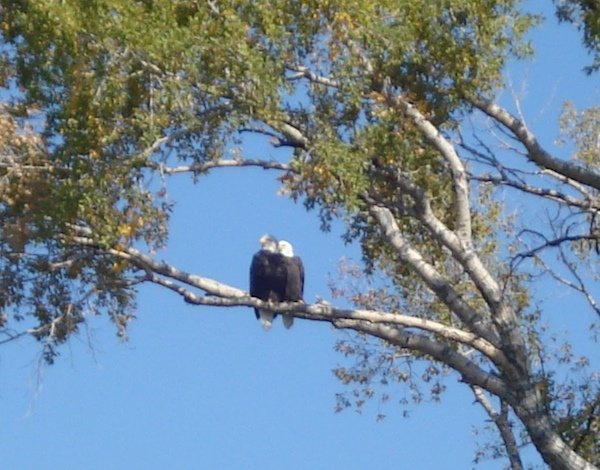 A pair of bald eagles. 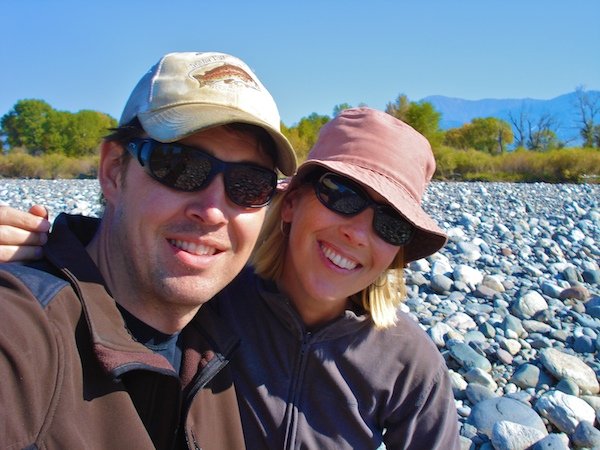 The happy couple at lunch. 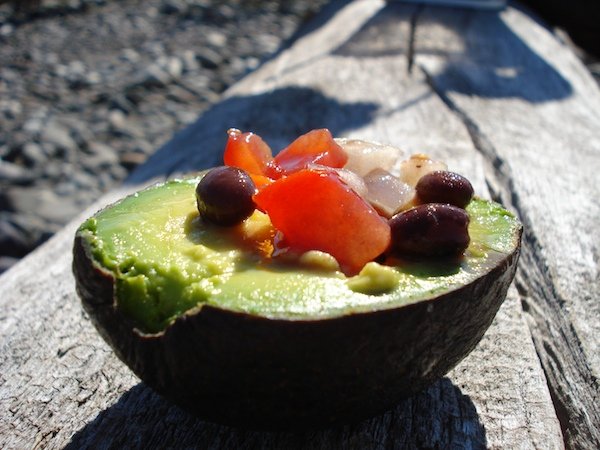 After lunch, we paddled out. The river turned sideways; we hit some riprap; we recovered; we hit some more riprap and tipped.

Our canoe is huge, the water was cold and all we could do was hang on through the (small) rapids. Somehow Henry grabbed a lifejacket for himself and handed me a floating seat cushion. Not to be too dramatic, but that may have saved one of us. We were gasping for air since the water was so cold and we couldn’t maneuver the canoe (now filled with water) to the edge. It got caught sideways on a rock, I almost got sucked under…blah blah blah.

But then we did get to the river’s edge and we were fine, if a little shaken up. We were down two (of three) paddles, two (of four) lifejackets/floating seat cushions, Henry’s jacket (with truck keys) and various other items.

After a minute or two of wit-gathering we got back in the boat to chase our gear. Henry paddled since we only had one paddle, and I grabbed gear as we caught up with it. A tube of lip balm, the Styrofoam thingy that goes under the boat on top of the truck roof, a fly box. We were going for something unimportant when we saw Henry’s brown jacket floating about a foot below the top of the water. That was sort of a miracle to find, especially since it had the truck keys. After a bit we found a second paddle and some other gear.

When we got out at Carters Bridger we were soaking wet (and shivering), Henry had blood running down both shins and our phone didn’t work. We went up to the highway to hitch back to our truck–thinking no one is going to pick up the wet, bloody couple–when our friend Brooke pulled up. Yay! They made room for us and drove us upriver.

The point of all this is that my favorite hiking/skiing/canoeing camera–the one that fits so easily in a pocket–was in my pocket throughout the swim. Henry’s phone started working after we dried it out, but the camera never recovered. I just thought this week to put the memory card in another camera to get the pictures.

2 thoughts on “The lost photos”