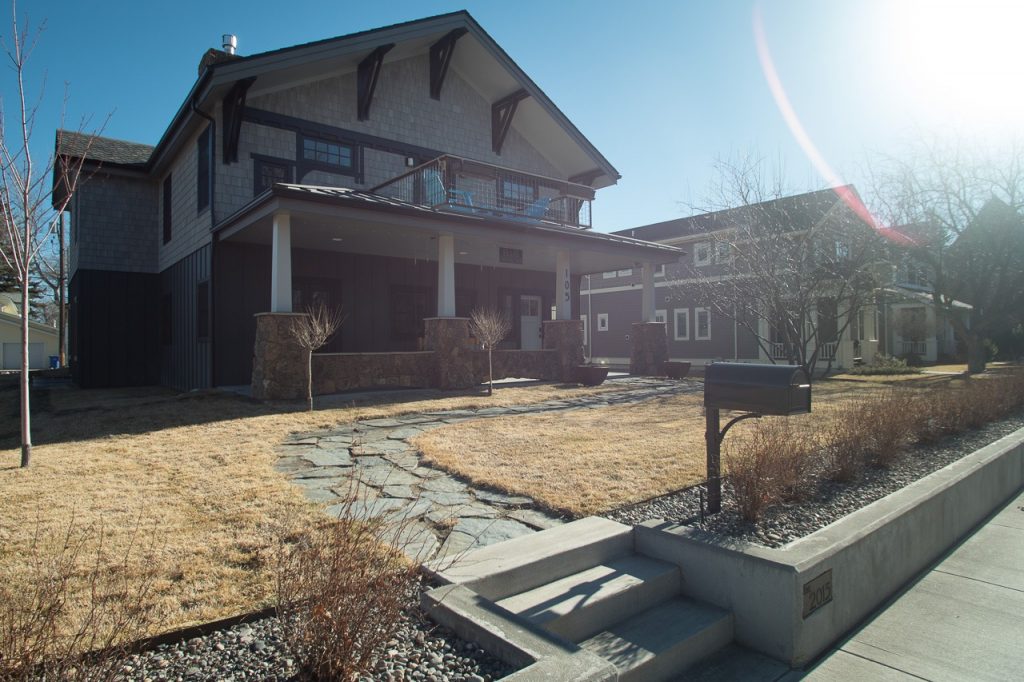 A Stone’s Throw Bed and Breakfast

A couple weeks ago, Henry and I had an in-town getaway to A Stone’s Throw Bed and Breakfast. We dropped the kids with Big Henry and Mogie and walked 3.5 blocks from our house to a gorgeous bed and breakfast.

A Stone’s Throw Bed and Breakfast is the dream and creation of Mick Burlington and Donald Zanoff. Staying with them was a real treat for Henry and I, both because the place is so comfortable and because Mick and Donald are such warm, interesting people. And it doesn’t hurt that it’s an adults-only lodging so we didn’t have to think about anyone except ourselves. I don’t know if I can go back to a Super 8 with the kids after this.

The name comes from the location. It’s just a stone’s throw from downtown Livingston’s restaurants and bars, the Yellowstone River, and the 15 or so art galleries Livingston is known for.

The 6,000+ square foot, B&B is between our house and downtown Livingston, Montana, so we walk past it almost every day. We watched it go from a hole in the ground to a full-fledged Montana B&B. Late at night we’d see the light through the window as Mick stained trimmed or worked on other pieces of the house. When it was framed and the exterior walls were up, the boys and I took a tour and tried to imagine what Mick and Donald had planned. We sound a little bit like stalkers, don’t we?

Every fixture, every piece of art in the Stone’s Throw Bed and Breakfast has a story. It was made by a Montana friend or acquired locally. There are pieces that Mick and Donald have been collecting for years that have been transformed into something interesting and useful by a welder friend or builder. The architect is local and a friend of the couple. Matt and Carl, who built the home, along with Mick’s help, live near by.

“We call this the house that Livingston built,” Mick told me.

Their very talented friends are everywhere in this house. From Lyn St. Clair’s artwork – her grizzly bear painting inspired the name of the room we stayed in—to custom welding, to Amber Jean’s bronze bunny bowl and more, the house is filled with custom pieces.

“People say this is the best art gallery in Livingston,” Mick said.

Because they built it from the ground up, a Stone’s Throw Bed and Breakfast is specifically situated for travelers, even if they come from just down the street. The three bed rooms each have an en suite bathroom, outlets and USB ports at the desk and above both bedside tables, comfortable beds, gorgeous art work, and plenty of space for hanging clothes and gear.

I fell in love with the double stall walk-in shower. This is going to get a little personal here, but you know when you want to shower with your friend/spouse/whomever and one of them (Henry) ends up standing in the cold while the other one hogs all the hot water? That doesn’t happen when you have TWO rainforest showerheads. Since the showerheads are adjustable, my tall husband didn’t have to slouch while enjoying his personal shower.

Rest assured that the house is very energy efficient and green.

And the food! Mick is an amazing self-taught chef. After dinner on the town, Mick whipped up fried peanut butter balls dusted in powdered sugar. The next morning we came downstairs to a (very upscale) take on the BLT. Three crostini topped with an egg, a tomato, and for the carnivores, bacon. Dill sauce and salsa lined the plate. There was tuna ceviche, fresh fruit, potatoes, beignets, and of course, tea and coffee. We were fed for the day! Mick rotates sweet and savory breakfasts for his guests that stay more than one night.

Restful Lodging at the Gateway to Yellowstone

Even if this weren’t the only Bed and Breakfast in town, it would be the best. It’s quiet, modern, comfortable, friendly, tasty, and close to everything. I have more adjectives in my pocket if you need them, but I think you get the point.

We were given a complimentary night’s stay, but the opinions are my own, of course.

19 thoughts on “Stone’s Throw Bed and Breakfast in Livingston, MT”