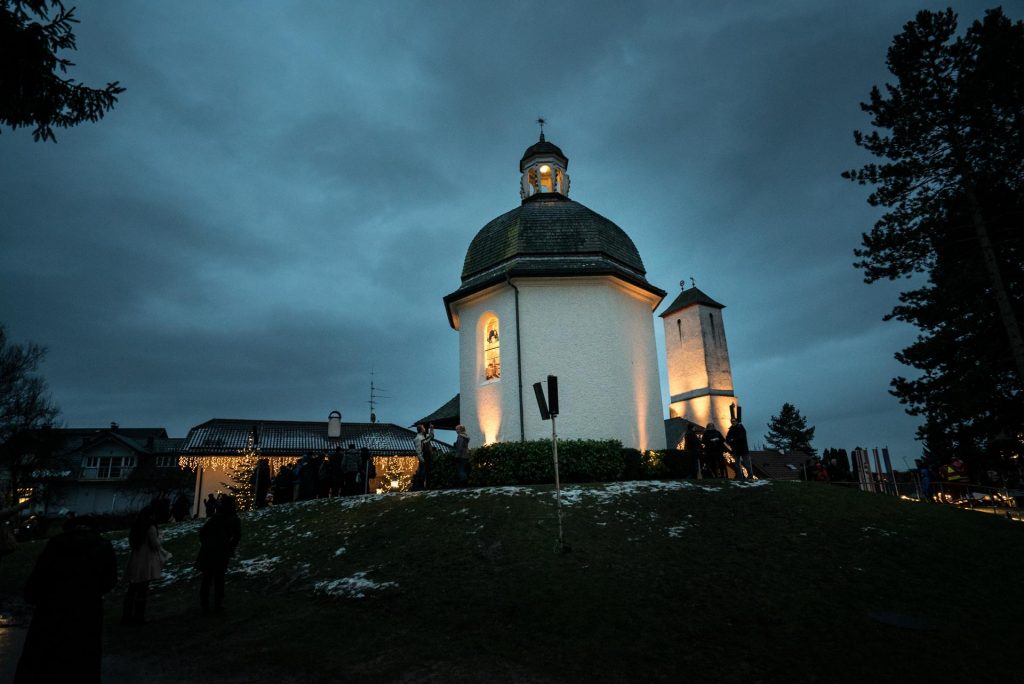 I know the winter holidays have passed, but I want to share one of the things we did in December to replace our usual winter traditions and create the sense of hygge that I long for this time of year. We took a “Silent Night, Holy Night” tour from Salzburg to see the Silent Night Chapel.

Every December 24 at 5 pm the town of Oberndorf puts on a ceremony and festivities to celebrate the world’s most famous Christmas carol.

You know the silent night song, right? You are singing it in your head, aren’t you? Or maybe out loud. Silent Night has been translated into over 300 languages and is one of the most popular Christmas carols of all time.

We took a tour with Panorama Tours to see the Silent Night Church, where the song was first performed, and learn about the history of Silent Night, Holy Night (Stille Nacht, heilige Nacht, in German).

Find Silent Night lyrics here. If you are looking for the words to Silent Night in the original German, check this site. 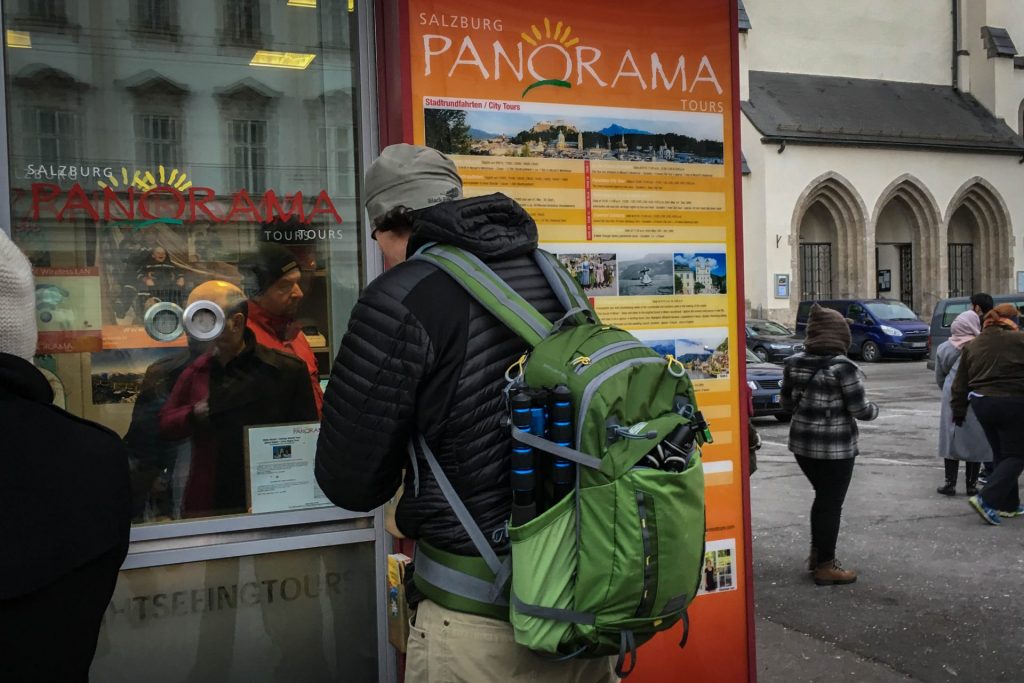 We took the city bus to Salzburg and lined up with hundreds of people to ride four huge tour buses to Oberndorf bei Salzburg, Austria and the Silent Night Chapel. There were a lot of people with the same Christmas Eve plan as us.

Our first stop was at the school where Franz Xaver Gruber taught in Arnsdorf. He was the Silent Night composer. Gruber served as organist for the Oberndorf church from 1816-1829, while Joseph Mohr, whose poem became the lyrics, was assistant priest from 1817-1819.

We were met in Arnsdorf by Max Gehmacher, the foremost expert on Franz Gruber. He spoke about Gruber and the song while we sipped glüwein and kinderpunsch from the Christmas booth. Then we walked through the school and museum. 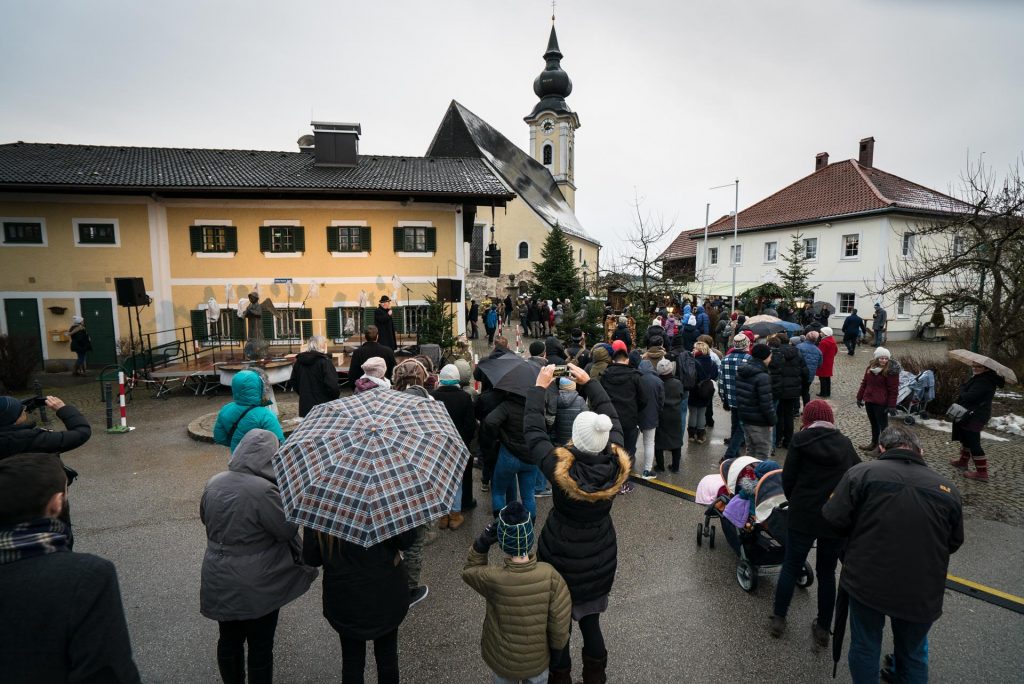 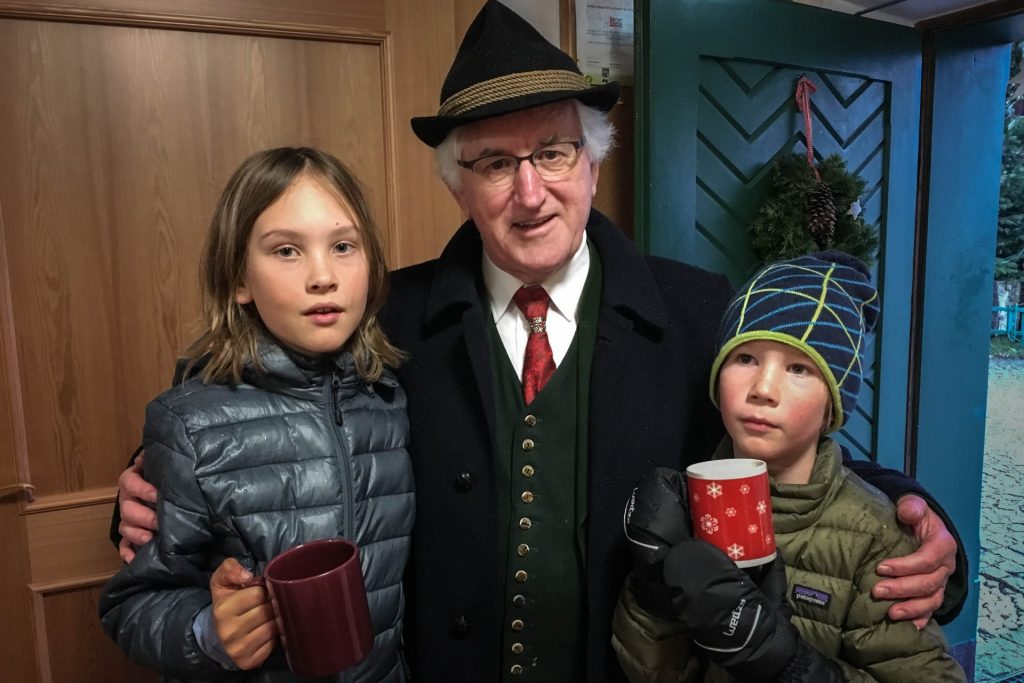 If you are in Salzburg, you can see the outside of the house Joseph Mohr lived in when he wrote the lyrics to Silent Night. It’s #9 Steingasse or Stone Alley.

If you aren’t familiar with the Silent Night origin story, Wikipedia sums it up nicely:

“The song was first performed on Christmas Eve 1818 at St Nicholas parish church in Oberndorf… A young priest, Father Joseph Mohr, had come to Oberndorf the year before. He had written the lyrics of the song “Stille Nacht” in 1816…

“The melody was composed by Franz Xaver Gruber, schoolmaster and organist in the nearby village of Arnsdorf, Before Christmas Eve, Mohr brought the words to Gruber and asked him to compose a melody and guitar accompaniment for the Christmas Eve mass. Together they performed the new carol during the mass on the night of December 24.”

As the legend goes, the organ in the church was broken, which is why they needed a song for voice and guitar. 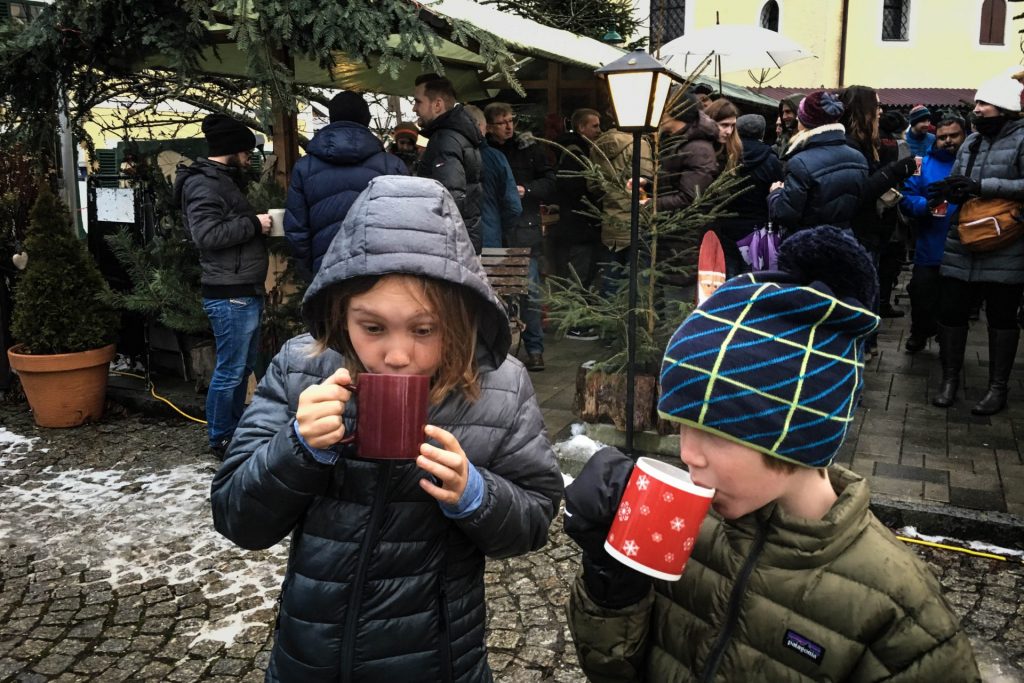 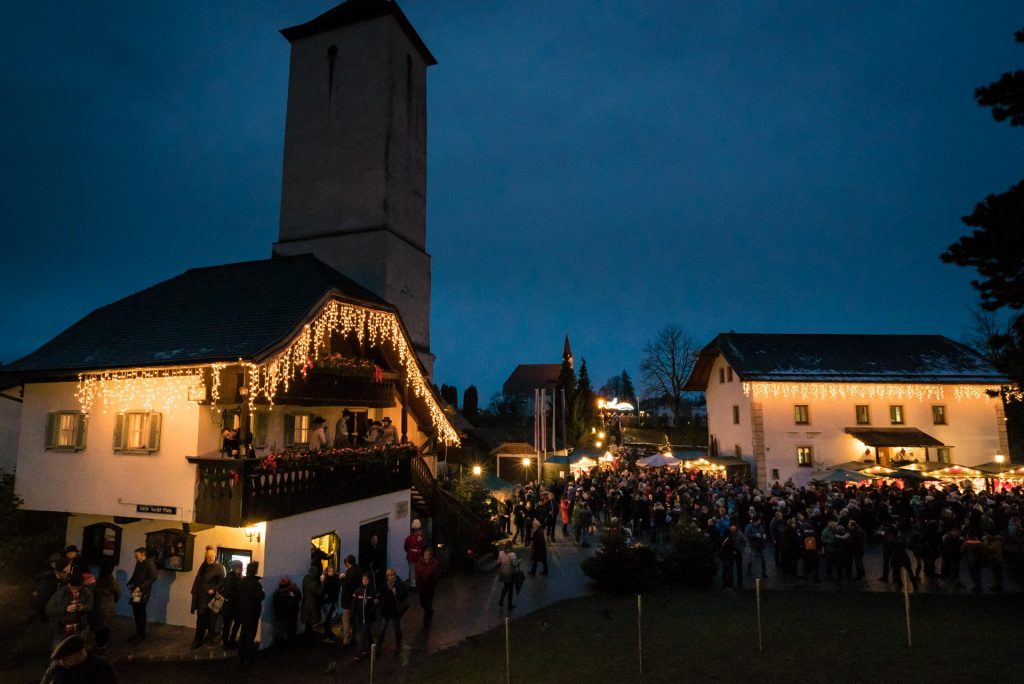 My favorite version is by John Denver and the Muppets. Not only do they sing in German and English, but he tells the origin of Silent Night.

Back on the buses, we drove a bit further to Oberndorf and the home of the Silent Night Chapel. It was a total madhouse, with tour bus after tour bus dropping tourists off to walk to the town square. And it was actually pretty fun celebrating Christmas Eve with all those people.

The original chapel flooded, so there is a new one atop a little hill. The boys and I got into line to go into the chapel. About 15 people could fit in there so we didn’t linger, but we did light a candle for polar bears and soak in the atmosphere.

There was a small Christmas Market, and we drank more glüwien and ate sweets. On a ridge above town, men in traditional garb shot guns. This is a thing that happens a lot around here between Christmas and New Years. I’m not really sure what the story is, but they dress up, line up, and shoot old black power guns, almost like a hand cannons. It’s very ceremonial.

We wandered back to the base of the chapel and listened to singing and talks about the song. This is when I fell in love with the song. 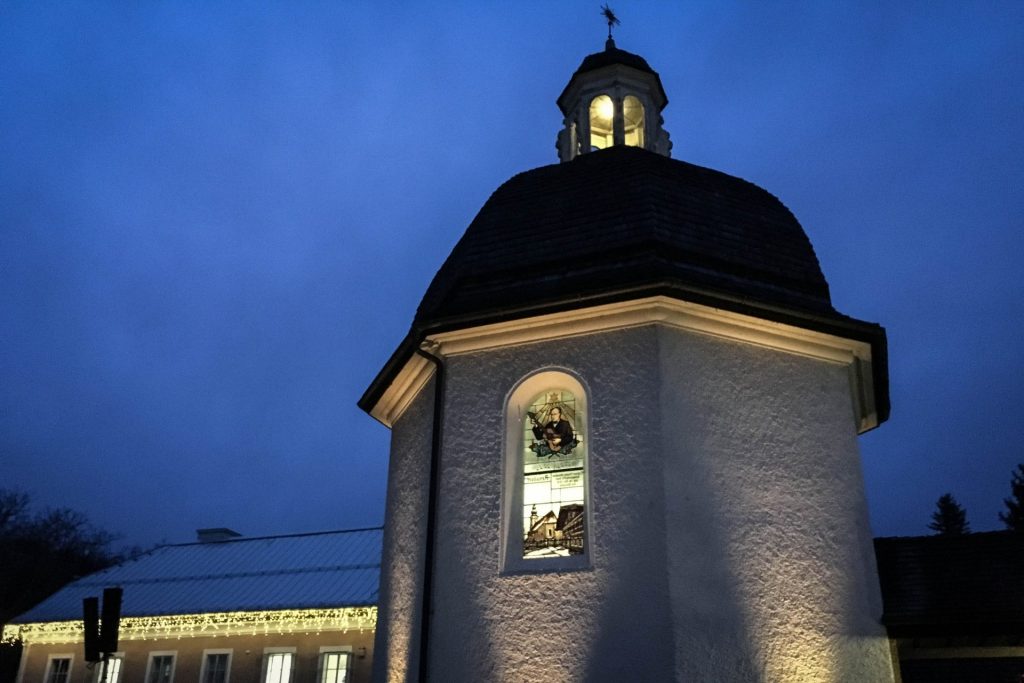 We were told that the song is about peace. It was written during troubled times and expresses a great longing for peace and comfort. The fourth and fifth verses, which you don’t often hear, exemplify that:

During WWI, the soldiers stopped fighting on Christmas 1914, played together, and sang the song. During WWII, the Austrian Ambassador brought the song to Roosevelt when campaigning for Austrian independence. And, the speaker said, we need the sentiment of Silent Night, Holy Night, and of peace, now more than ever.

Despite the touristy-ness of the tour, I really loved it. I will always remember Christmas Eve at the Silent Night Chapel in Oberndorf, Austria, gathering with others to celebrate peace and Christmas.


Other Things to Do in Oberndorf

We stuck to the Oberndorf Christmas Market and the chapel, but there is also a Silent Night Museum, Silent Night Café, and Silent Night Gift Shop. Despite all that, it’s still a very cute town.

You don’t have to go to the ceremonial event on December 24 to see the Silent Night Memorial Chapel, you can go any time. And if you like rolling hills, big mountains, trails, and hay fields, you’ll find lots of things to do in Oberndorf.

Getting to the Silent Night Chapel

I’m not normally a huge fan of tours, but if you want to get to the Silent Night Chapel easily, and learn about its history along the way, this is a great way to do it. You are going to be celebrating with thousands of people regardless, so you might as well have a comfortable ride. We went with Panorama Tours and there are other Salzburg tours.

The 21-kilometer drive takes about 35 minutes from Salzburg. Parking in Oberndorf will be tough so get there early or plan to walk a bit.

There is a train that runs from Salzburg HBF to Laufen in Oberbayern and from there you can walk the last two kilometers. Just follow all the other tourists to find the Oberndorf town square. Depending on which train you choose, it’s a 42-75 minute ride. 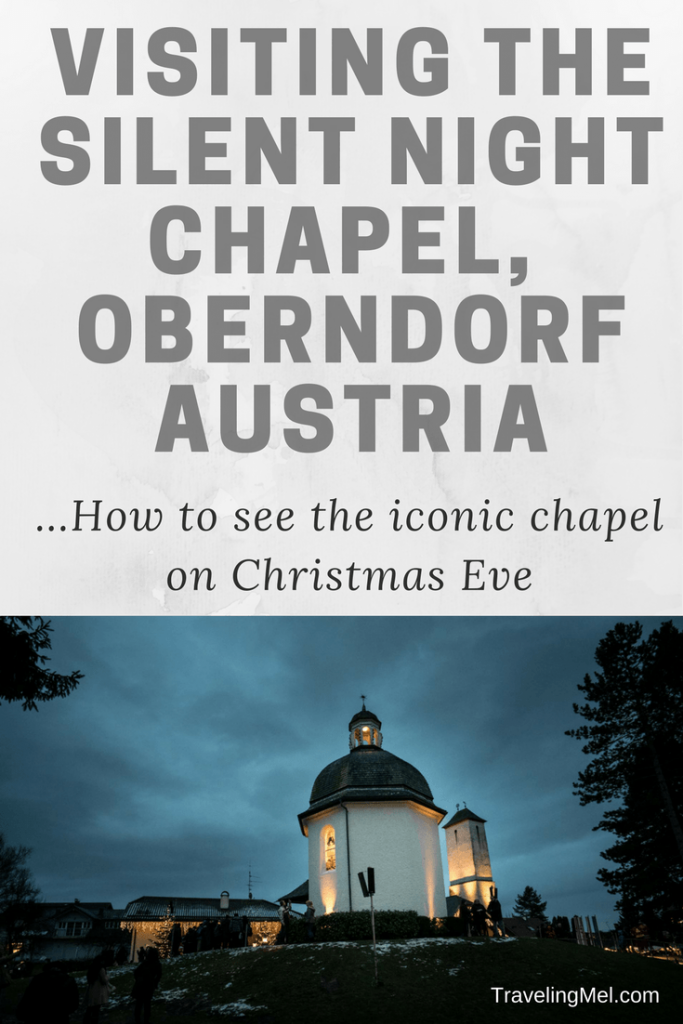 Thanks to Panorama Tours for my ticket (we paid for the rest of the family). The opinions expressed here at TravelingMel are always my own.