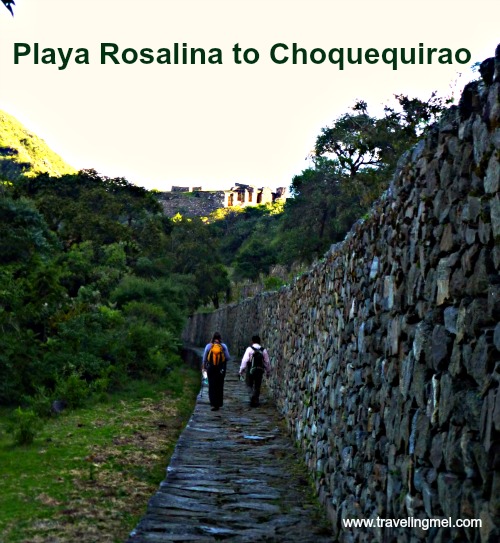 The morning of our second day on the trail (and every morning after that) Wilbert woke us up. He came to the door of each of our tents and said, “Buenos Dias! Coca tea?” One of my dreams in life is to be woken by someone handing me a cup of tea, and then to drink that tea in my bed. Or in this case, in my tent.

It had been a hot night, I slept without my sleeping bag and was still sweaty. Because we were so low (by the standards of this trip) and near the river, it was hot and humid. 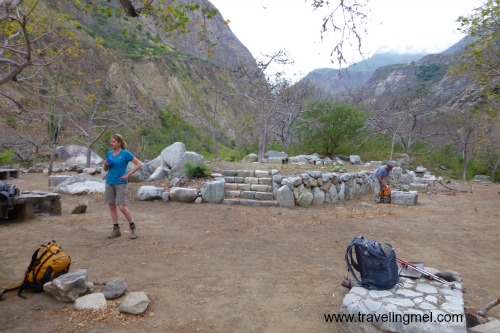 Campsite at Playa Rosalina after we packed up.

After packing up our bags and getting our snacks from Domingo, we were ready to cross the river. The suspension bridge washed out last year, so we got to ride across in a open cage suspended about twenty feet above the Apurimac River on a cable. One person pushes you out and then either you pull yourself the rest of the way, or someone on the other side reels you in. 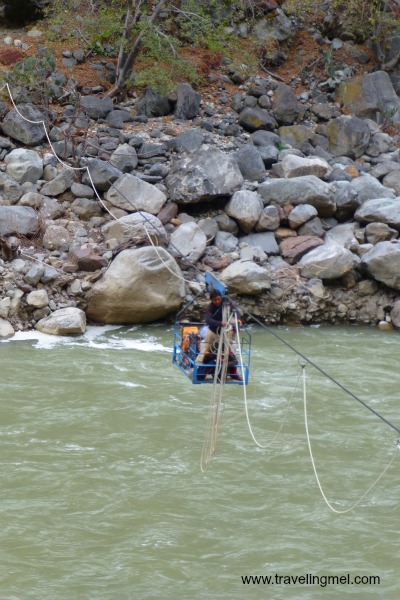 Ross posted a couple short, fun videos of the crossing, which I can’t seem to embed. Here’s one of
Amy and Kelli crossing. And another from Ross’ perspective as he crosses. Both were shot by Ross.

From there, it is a mere 1800 meters (5905 feet) up the hill to Choquequirao. I would describe the hike as a grueling sufferfest or a sweaty slog. I was drenched and every time we got to the top of one ridiculously steep switchback, there would be another one ahead that looked exactly the same. It was purgatory. I would have cried if I had the energy, but all I could do was place my trekking poles, take four steps, and place the poles in front of me again. We were in the shade most of the time, otherwise it would have been really miserable.

Everyone (except Kelli–she is a machine) had one hard day on the trip. This was mine. 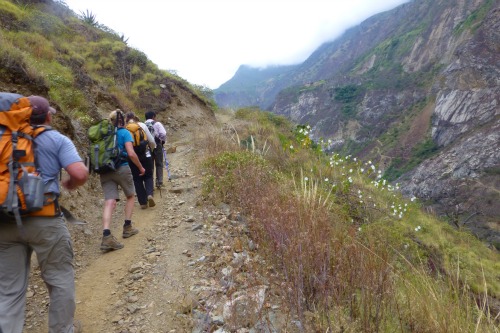 Before the trail got steep. 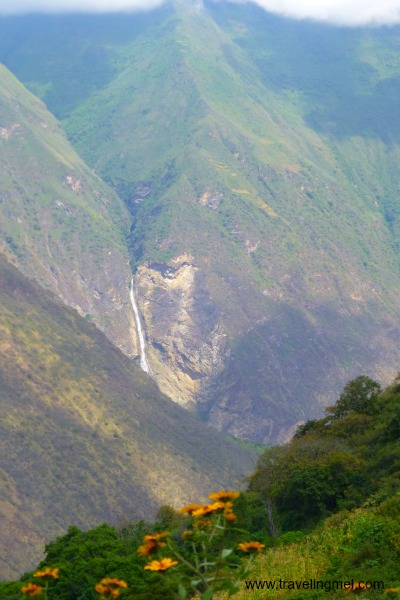 Waterfall on the other side of the river. 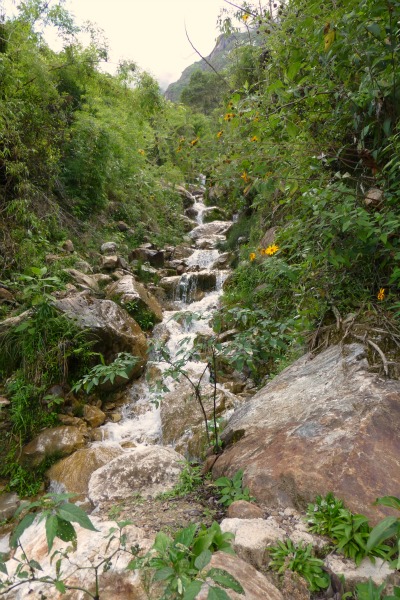 A place to cool down. 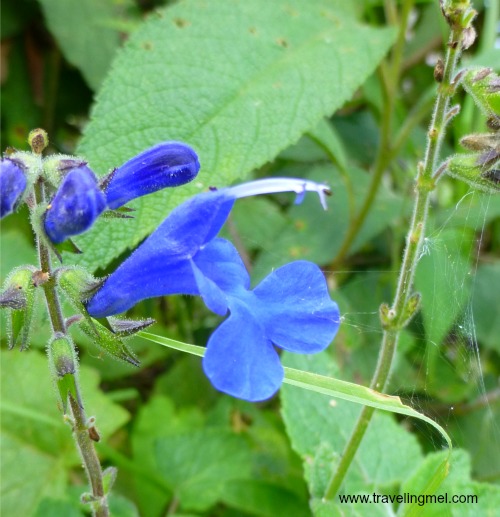 As we climbed the mountain, trumpet flowers gave way to penstemons, lady slippers, and ferns. We crossed a small creek cascading down the mountain and got to dunk our heads and cool off for a couple minutes. After the millionth switchback, I drank the juice box Domingo packed for me and felt a lot better.

Lunch was on a small farm/campsite. Several families lived there, on these super steep slopes, and I wondered what it must be like to live a day and half walk from the nearest small town. No electricity, no running water, just making a living with subsistence farming and selling a few sodas and beers to tourists. When I think of living off the grid, I picture us with solar or wind power, and a cistern to catch water. This is really off the grid. 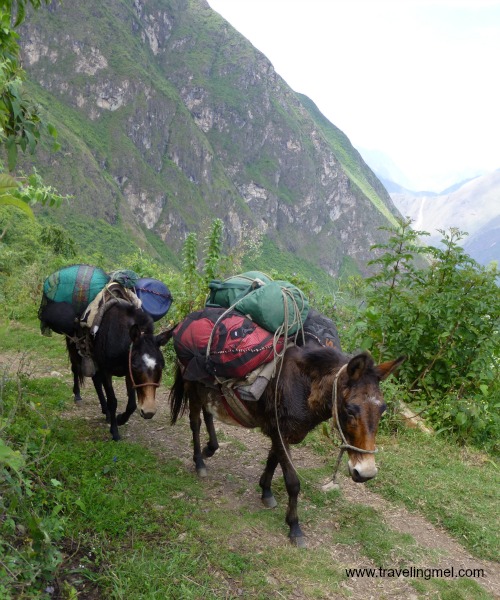 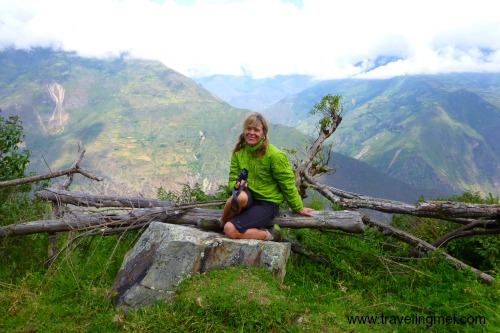 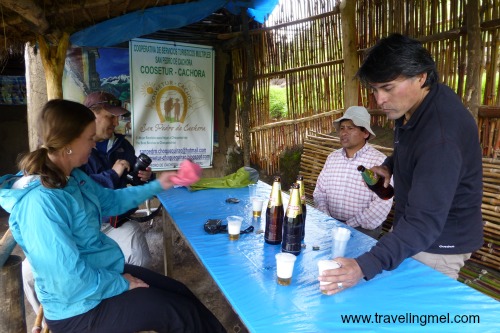 Domingo caught up with us and cooked quinoa, veggies, mashed potatoes, avocados, and garlic bread. Maybe beef for the rest of the group. We were not roughing it. I had a beer, wrestled with a dog and a little kid, then took a quick nap on the grass. I no longer felt like crying.

After lunch, Wilbert told us it was “twenty minutes over rolling hills” to Choquequirao. About an hour later, after dragging myself up and down steep inclines, we arrived. Fortunately, there were a lot of pretty flowers along the way to distract me. And I learned an important lesson about Wilbert’s perspective on distances. 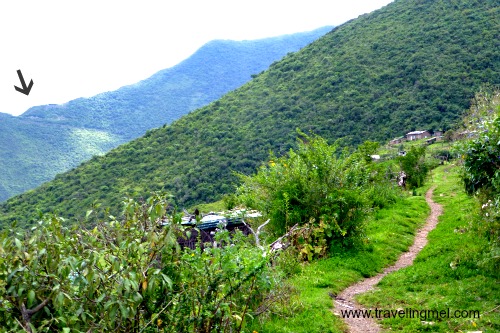 We’re almost there! Not really, Choquequirao is under the arrow.

Choquequirao, also called “Chuqi K’iraw,” “Cradle of Gold” or “Choqek’iraw,” is on one of the spurs in the Salkantay Mountain Range. Much like Machu Picchu, Choquequirao was built high on a ridge above a sacred river. In all directions, you can gaze on high mountains, including three apus, or mountain gods. Both Machu Picchu and Choquequirao have upper and lower levels built around a central plaza and have an elevated platform (usnu) at one end. And they are both surrounded by stone-walled terraces for growing crops. 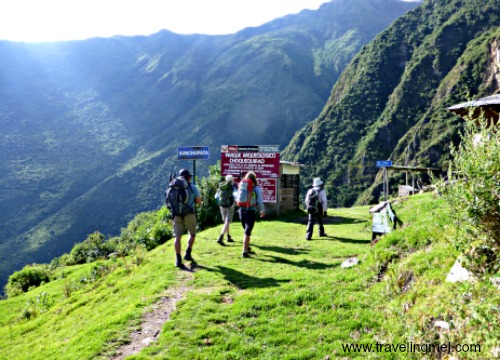 Entrance to the site–almost there! 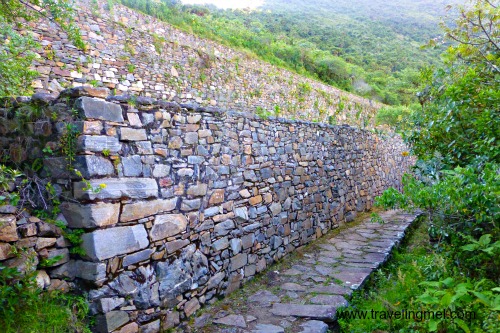 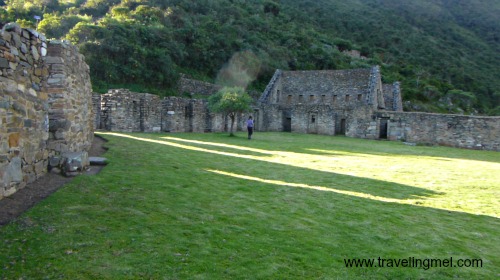 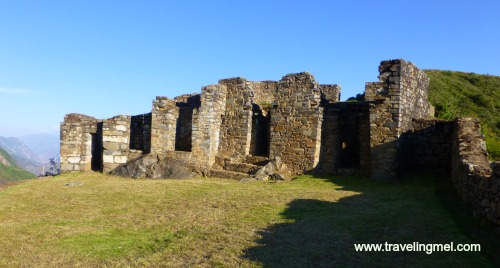 The differences between the two Incan cities, is that Machu Picchu is mostly uncovered, while Choquequirao remains mostly overgrown by the jungle. No one knows how many buildings are waiting to be rediscovered. And since it is a two day walk, whereas Machu Picchu only requires a bus ride, Choquequirao is relatively empty. When we arrived, there was no one else there other than a few UNESCO workers. We had seen just two or three other groups on the trail. At Machu Picchu we would see hundreds of people.

I walked up to the usnu alone. It was a flat area above the main plaza used for sacrifices and spiritual ceremonies. Ross had been talking about the “good energy” in the mountains, and everyone raves about the spiritual significance of these Incan cities. I definitely wanted to feel that, to have some sort of spiritual experience, but those things usually don’t happen for me. Until I walked onto that usnu. 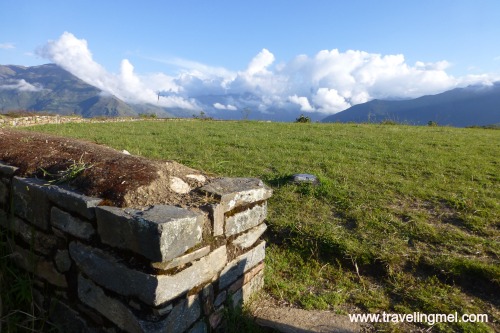 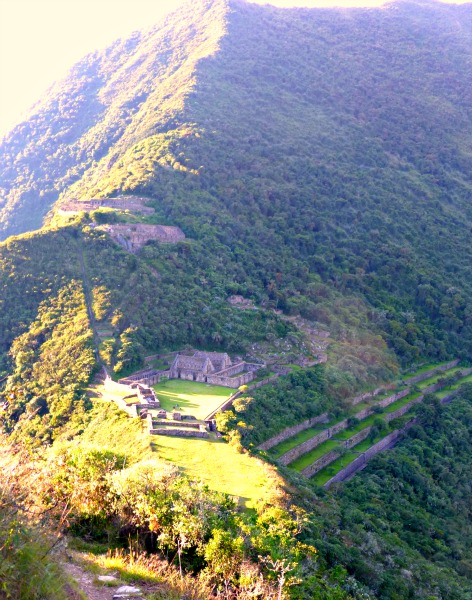 Part of Choquequirao from above. 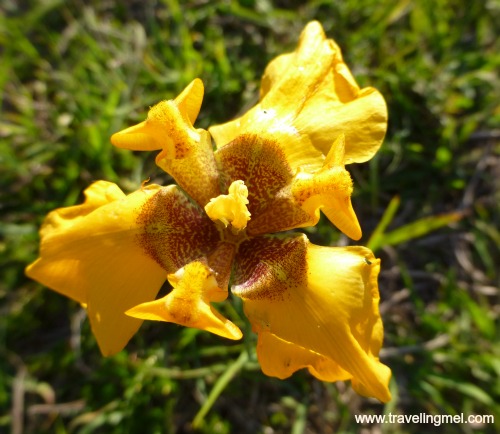 The usnu was dotted with irises the color of the sun.

Maybe it was vertigo, but my whole body was tingling. I had to sit down on the low stone wall circling the platform. That made me feel even more tingly. There was energy flowing through my body. I don’t know if it was Inca magic or a gift from the sun god, but something was going on up there. Later, Ross, Felicia, Amy, and Kelli all had similar experiences. 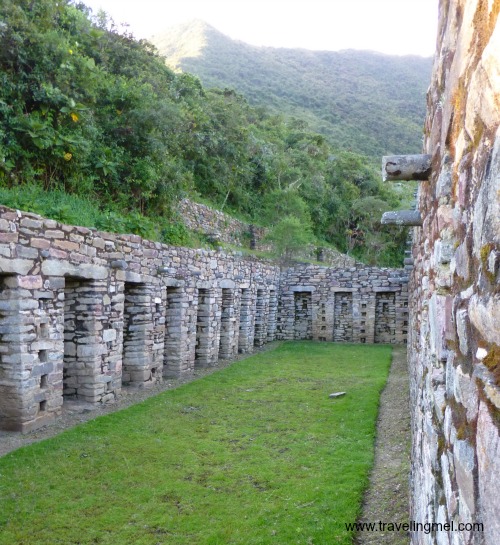 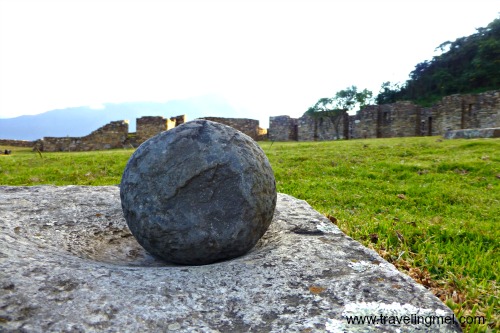 I explored a little more before walking back down to the campground with Amy and Kelli. Despite all the running and strength training I’ve been doing, my quads were screaming. The blisters on my feet hurt. But I was psyched. I just walked for two days up and down steep, steep mountains to get to Incan ruins. Not many people get to do that. And we had another week ahead of us. Happy birthday to me, indeed. 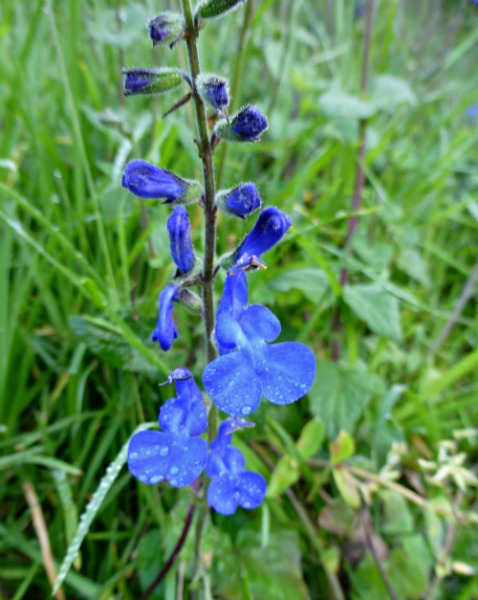 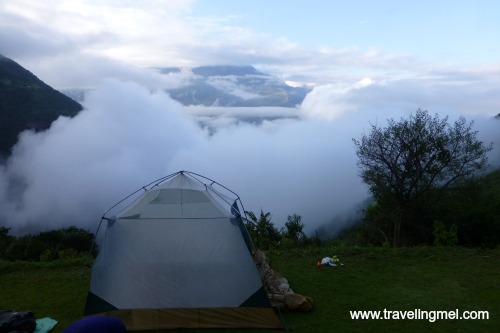 The campsites kept getting better and better.