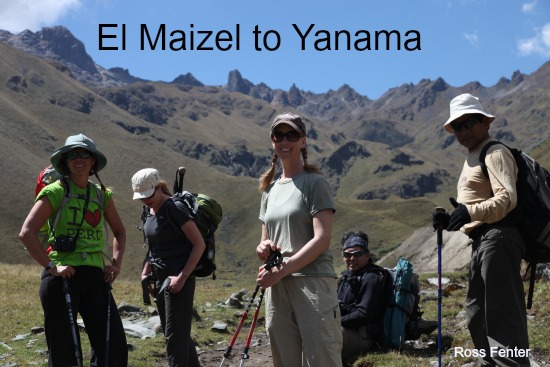 We woke up at El Maizal to find ourselves on a terrace, surrounded on three sides by mountains across deep valleys. Since we arrived in the dark we didn’t know exactly what to expect; we weren’t disappointed.

El Maizal is a little farm perched on the side of the Andes. I didn’t write down the couple’s names who farm there. The husband had left to tend corn crops or something by the time we got going, but the wife (did Wilbert call her Mama Tomasina?) gave us a tour of her home. 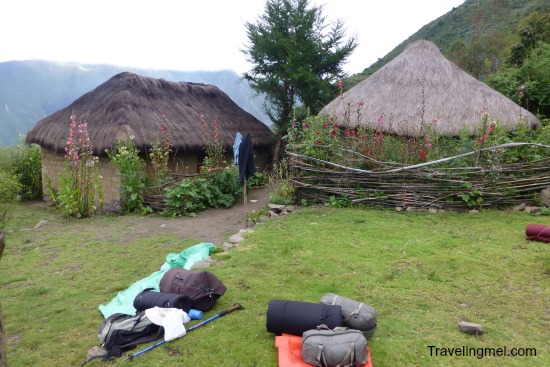 Our campsite at El Maizal 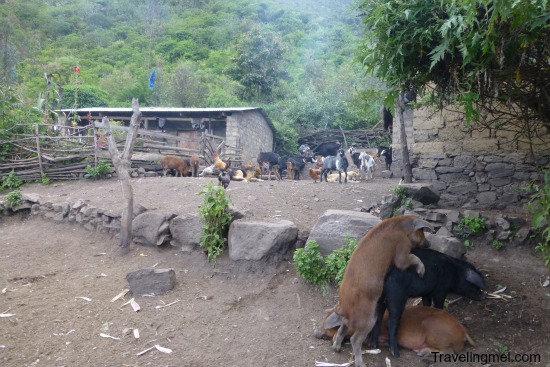 Getting busy in the barnyard. This is what you walk through to get to the outhouse. 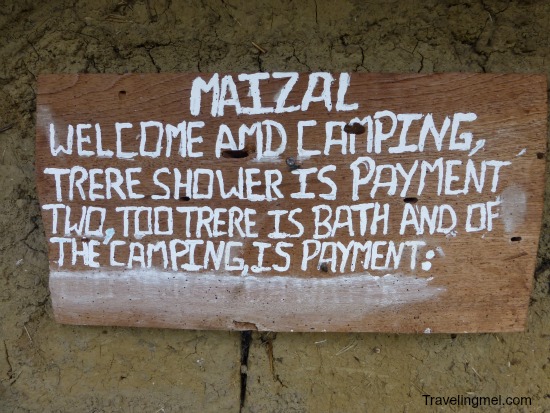 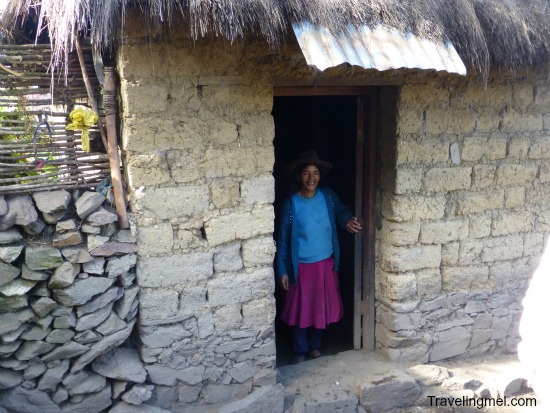 Mama Tomasina (maybe) in the doorway of her house.

It was tiny and dark with a dirt floor. In the back, guinea pigs, or cuy, skittered around. When they are big enough, they will become dinner. For now they are just cute. The small attic was filled with dry corn that provided both insulation and food for animals and people. Pigs, goats, cows, chickens, and other barnyard animals wandered around outside. On the campground side–a couple grassy terraces that just fit our eight tents–foxgloves stood tall like sentinels on either side of a gate.

If you’ve been reading the many chapters of this travelogue, you know what our day looked like. We climbed up, up, up to San Juan Pass. The Rio Blanco, already about 3,000 feet below us at El Maizal, grew smaller and smaller and then disappeared all together. The lush jungle of the morning gave way to the puna–a high treeless plateau near the pass. 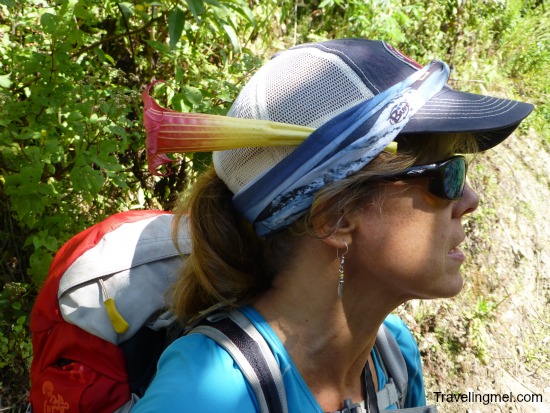 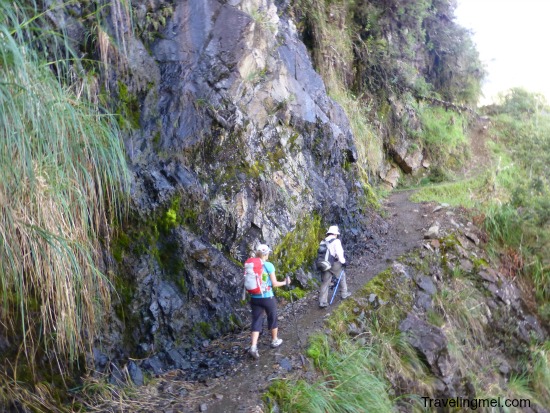 Wilbert and Amy head up the wet, jungly, trail. 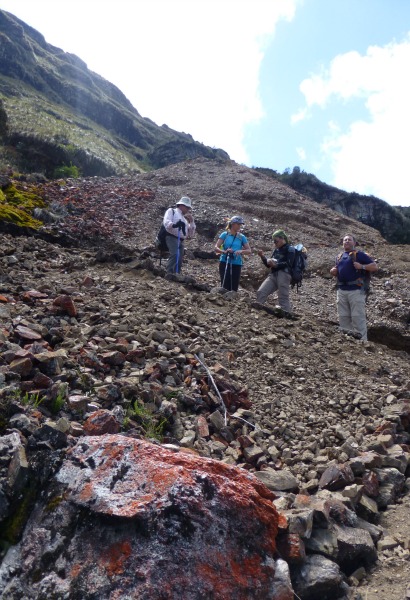 They don’t mind waiting while I take photos of flowers. 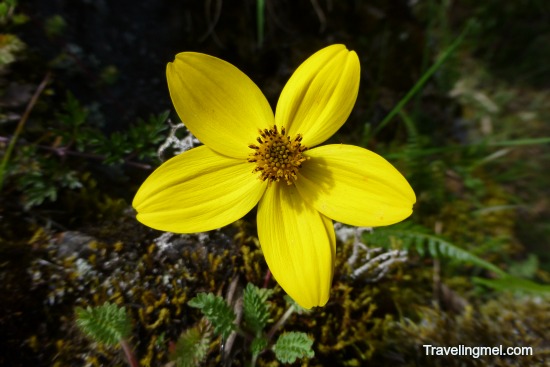 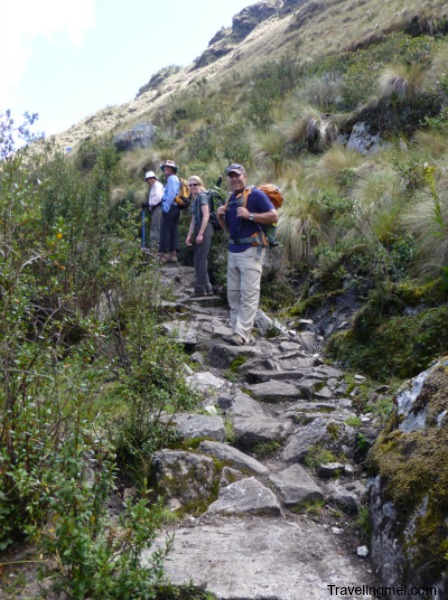 I’ll get there eventually. 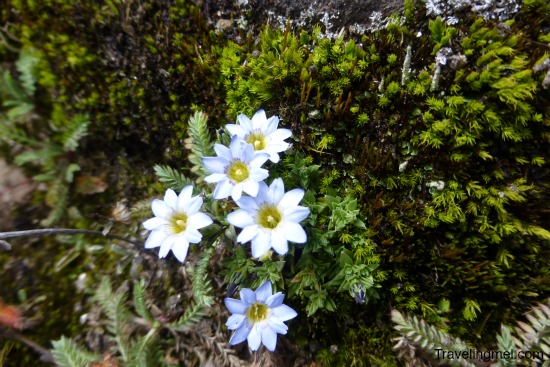 Another quick photo stop. You should have seen all the flowers I didn’t take pictures of. 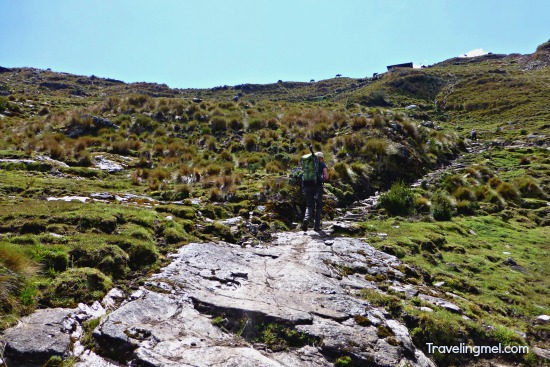 Into the puna and almost to the pass. 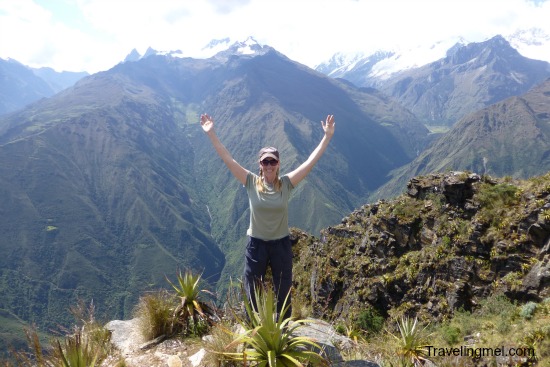 Domingo was waiting for us at the 13,615-foot pass with a hearty, vegetable lunch. Amazed as I was (again) by Domingo’s ability to pack up after we leave, pass us on the trail, and have lunch going before we get there, what really blew me away was the view. 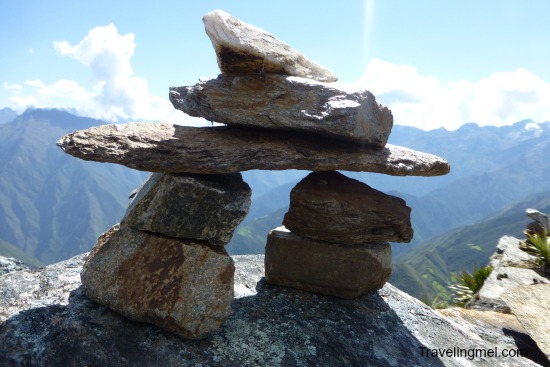 Inuksuk on the pass. They probably call it something else in Peru, but these cairns are offerings to the mountain gods. 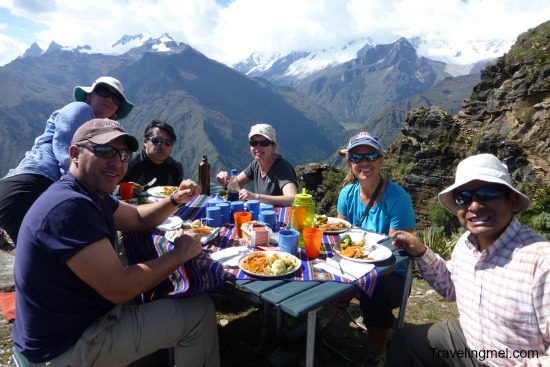 Lunch at the top. 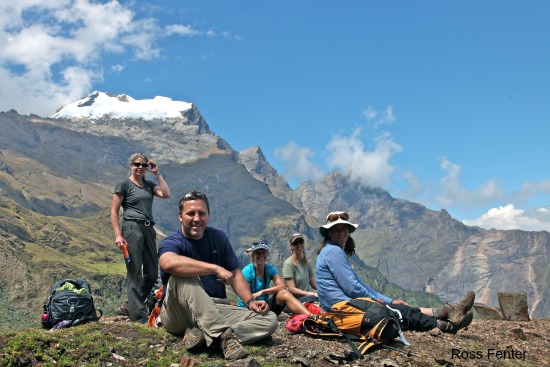 We stood on the edge of the saddle taking photos of ourselves in front of Marcana, Puma Cillu, Chocquetacarpo, and other snowy peaks while braving the heat “down low.” For the second or third time we were honored by Andean condors soaring overhead while we ate.

Andean condors are so big–one of the largest birds in the world that is still able to fly–that they have to live in windy areas to take advantage of the lifting air currents. These vultures are considered endangered, but we were lucky to see a bunch of them on this trip. It pays to stick to high, windy passes. 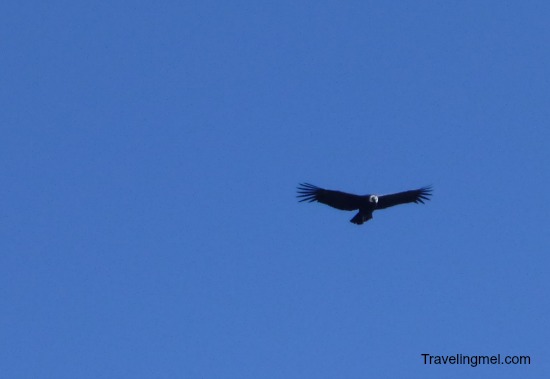 Andean condor blessing our trip. Or looking for something dead to eat. Hard to tell. 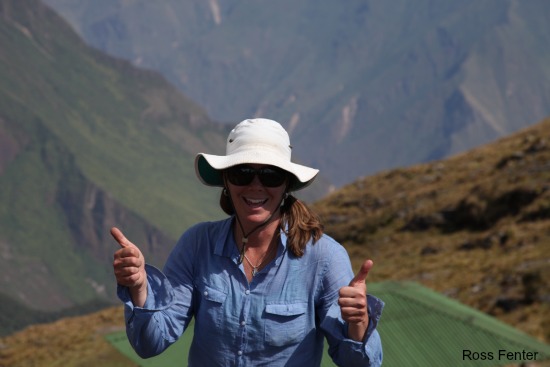 Two thumbs up for this awesome Bella Treks adventure!

From the San Juan Pass (locally called Yanama Pass), we walked down narrow trails to a valley full of lupines, orange lilies, verdant green hillsides and craggy mountains overhead. The Yanama Valley wowed us all. There had been no access by vehicle until very recently, so everything had to be brought in on horses and mules. It’s one of the most pastoral, beautiful places I’ve ever seen. 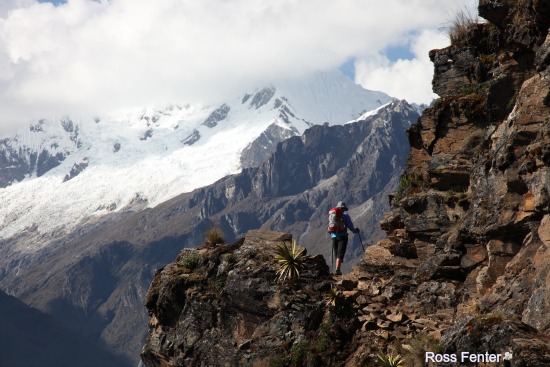 Amy rounds the bend on the hike down into the Yanama Valley. 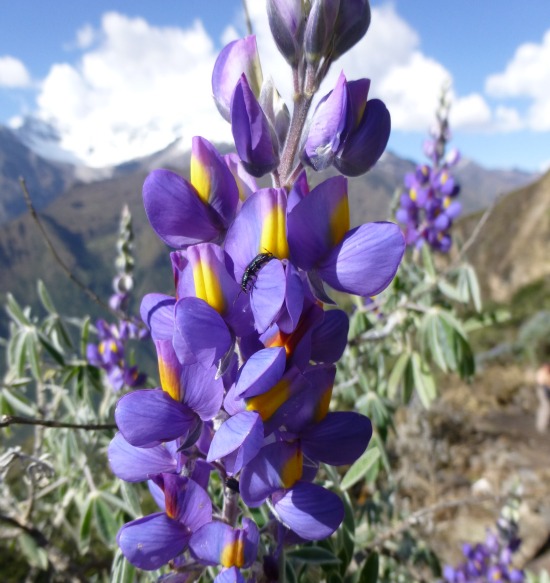 Is there anywhere lupines don’t grow? 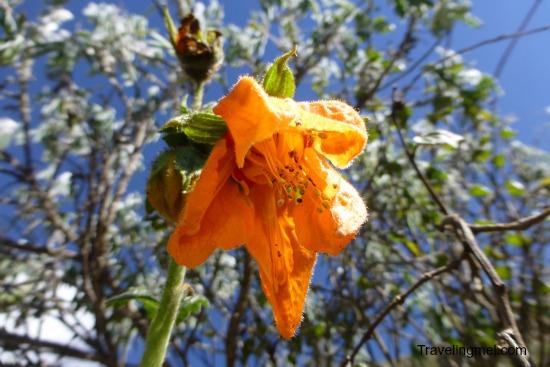 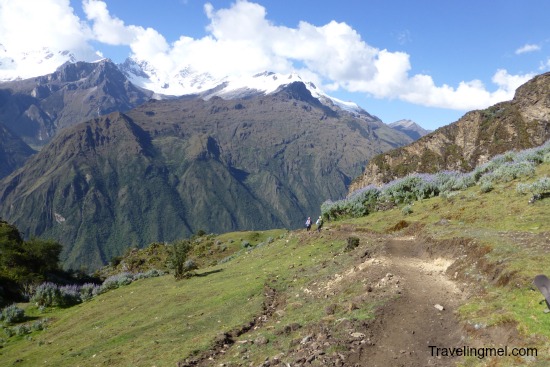 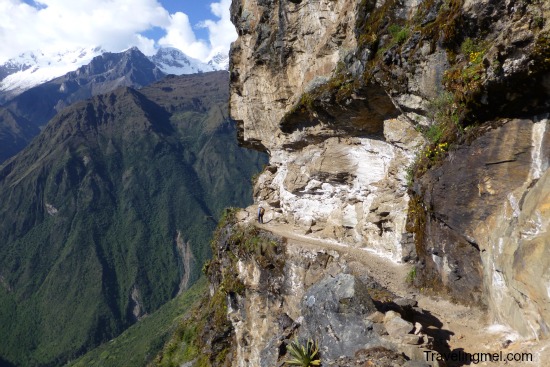 I wish we had seen the mules on this section of trail. 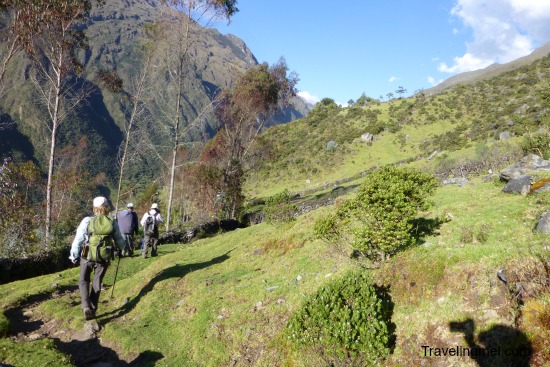 About 200 families live in the Yanama Valley, mostly as subsistence farmers. We walked past several little farms surrounded by low rock walls to get to the place we’d be staying. Chickens and roosters wandered through gladioluses, Easter lilies, poppies, and other bright, tall flowers.

Most exciting of all was the Fanta poster at the entrance to our camp/farm. That orangey, high fructose mix of goodness is something I crave when I travel internationally. When I’ve been in Belize, Panama, Turkey, Argentina, and every other country outside of the U.S. I want Fanta. I love Fanta. Not in Canada, though. In Canada, I want cocktails. 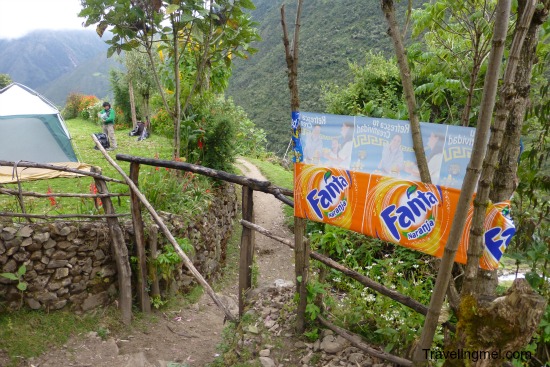 As usual, our tents were already set up in two neat lines. I crawled into mine to rest and read, but when the guy came with the Fantas and beer, I was out in seconds, soles in hand, ready for my treat. 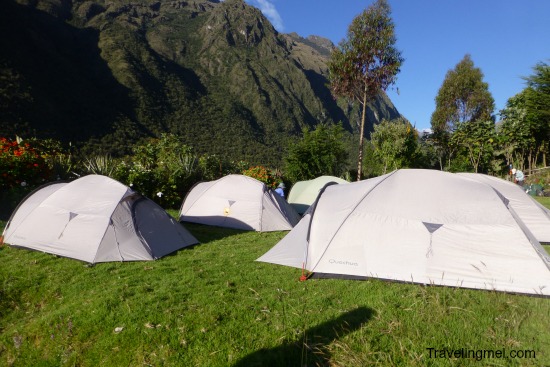 I wrote in my journal that this was one of the most physically demanding things I’ve ever done. Every day we climbed and descended thousands of feet, all at high elevation. But, since I’ve been back, the hard part of it has slipped out of my brain leaving only the amazing parts. And maybe the hard work made everything else that much more rewarding.

Last weekend, Ross came through Livingston (he lives in Seattle) and we had a little BBQ at Felicia’s. He told Henry this trip was one of the most physically challenging things he had ever done–and that guy has done a lot of hard core stuff. It made me feel less wimpy. And it made me realize that even the hard stuff isn’t that hard. You just keep putting one foot in front of the other, lean on your sticks, and keep moving.