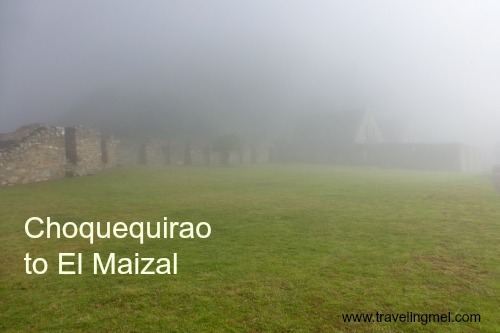 First off, Henry said I should tell you how to pronounce “Choquequirao.” It took me a little practice–the quechua words are tricky. Show-kay-ca-row (that “row” rhymes with “cow.”) I don’t know if that helps, but there you go.

It seemed that the campsites in this little slice of the Andes kept getting better and better. We woke up on the edge of terrace overlooking mountains and river. After breakfast we hiked back up to Choquequirao to check out the llamas. 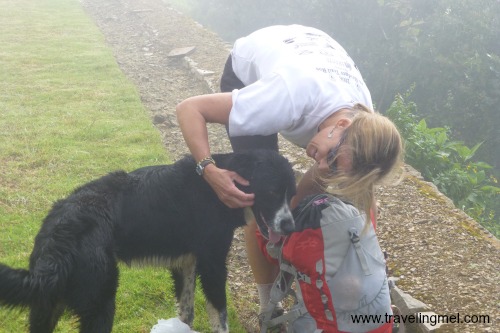 Amy with her canine friend. 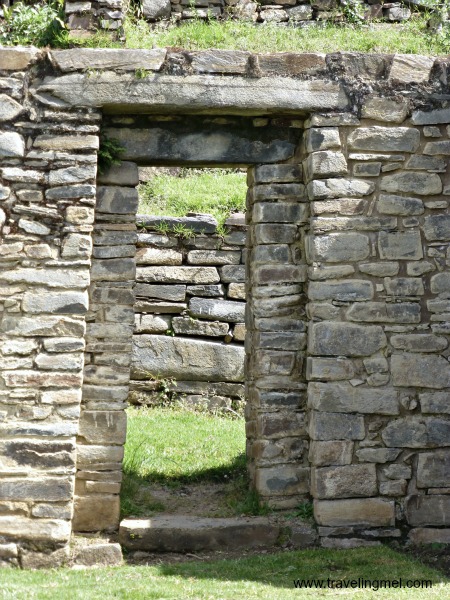 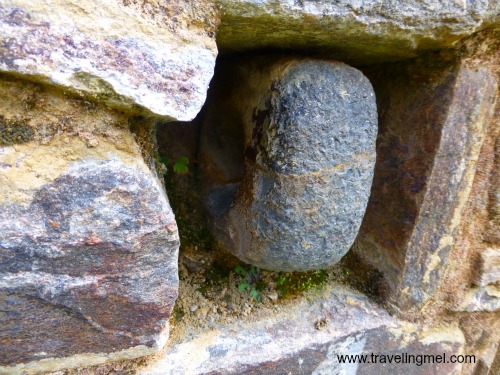 The hole in the middle of the rock was used to tie yarn to as an anchor for weaving projects. 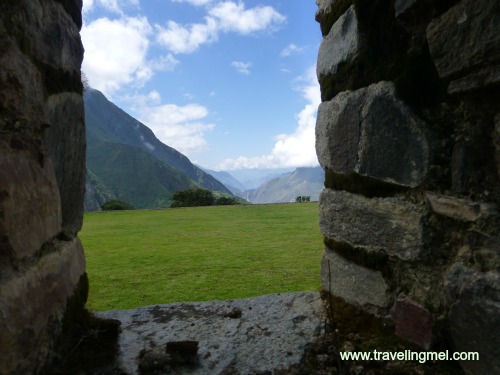 Room with a view.

Choquequirao was one of the last bastions of resistance and refuge of the Son of the Sun (the “Inca”), Manco Inca Yupanqui, who fled Cusco after his siege of the city failed in 1535. It’s unlikely the Spanish ever made it up there.

Of course, getting to the llamas requires a bit of a decent. It is Peru, after all, and everything is up or down an incredibly steep slope. From the main plaza we followed a little path to a set of rock steps that dropped several hundred feet into the canyon. Apparently the Incans had much smaller feet that I do, so I could fit about half of my foot on each step.

We descended along the edge of the terraces, checking out the llamas as we climbed down. There were about 24 of them, each as tall as a person. There may be more; only about 30 percent of Choquequirao has had its jungle removed. (Sidenote: How does one estimate the amount of undiscovered ruin?) 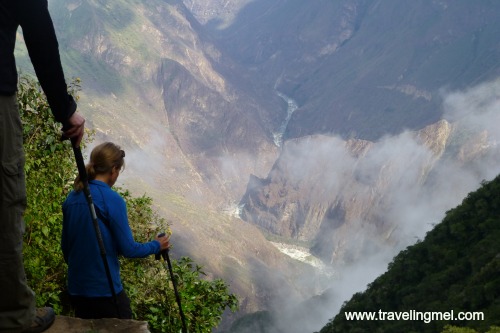 Down to the llamas. 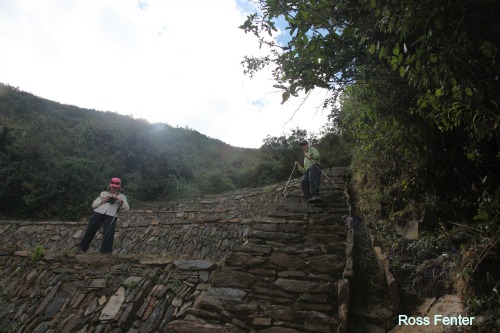 Keep going. Down, down, down. 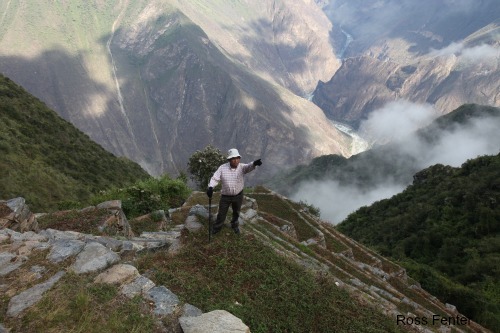 Wilbert tells us how important llamas were to the Incans. 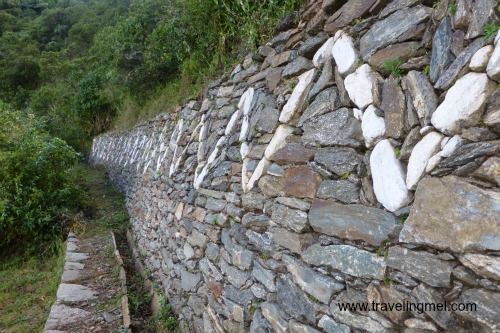 Mountains above the llamas. 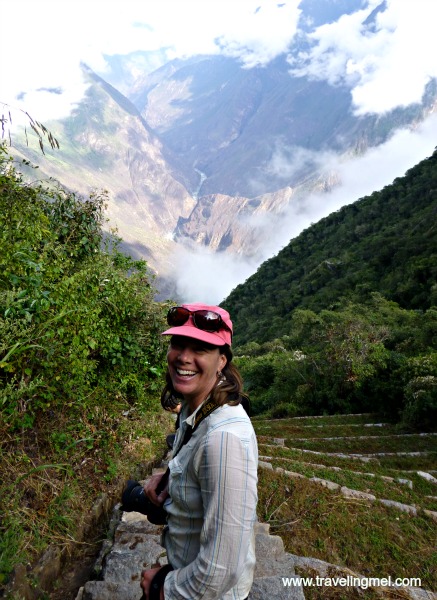 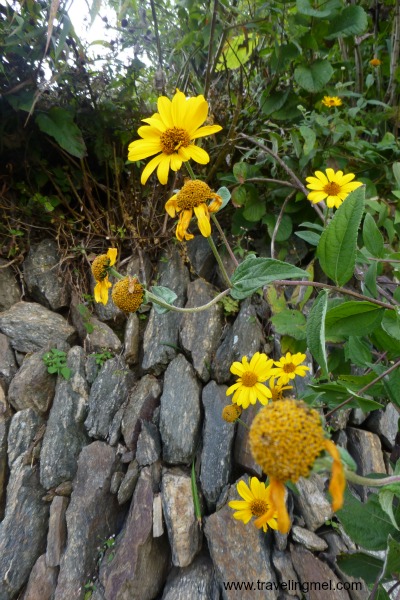 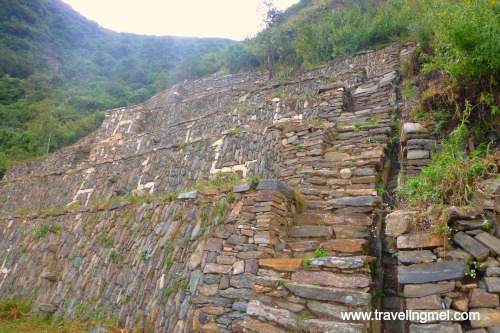 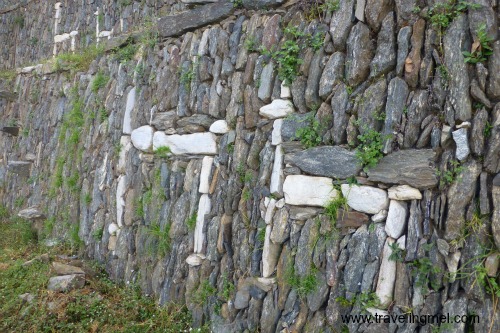 Mama llama and her baby. 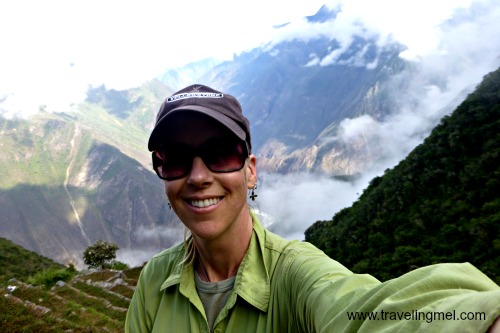 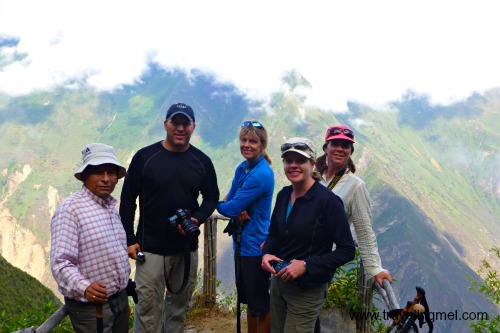 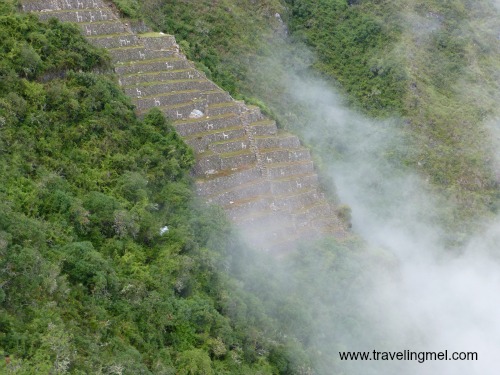 Fog climbing the mountain and obscuring the llamas.

After oohing and aahing at the llamas and the view, we climbed back up the steps and onto a less-steep side trail. At the plaza we found Wilbert standing in the trees at the top of a (say it with me) incredible steep aqueduct. “Is that the trail?,” I asked incredulously. Of course it was, and off we went 1500 feet up to a little pass. 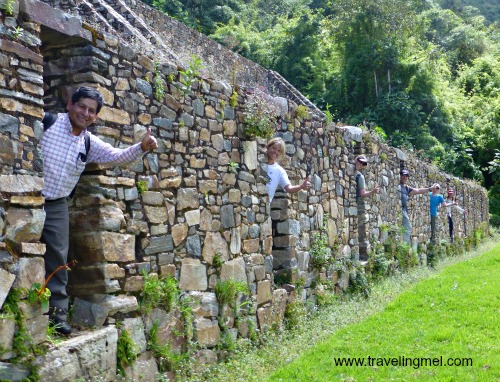 Another photo instigated by Wilbert. 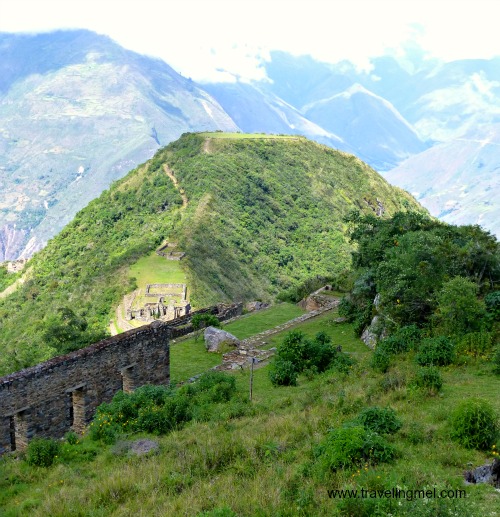 After a tough previous day, I snapped into shape. The rest of the trip was steep and hard, but wasn’t such a big deal anymore. The flowers along the pass were tremendous, the mountains were big, and after a bit we dropped down 5,000 feet to the Rio Blanco. The first thing we did was take off our boots and soak our feet in the cold water while sitting on warm rocks in the sun. Then Ross put a ton of mayo on his lunch thinking it was some sort of mango sauce. Hee hee. 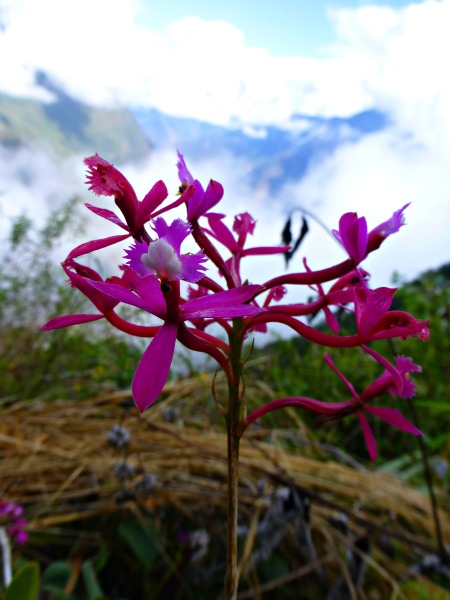 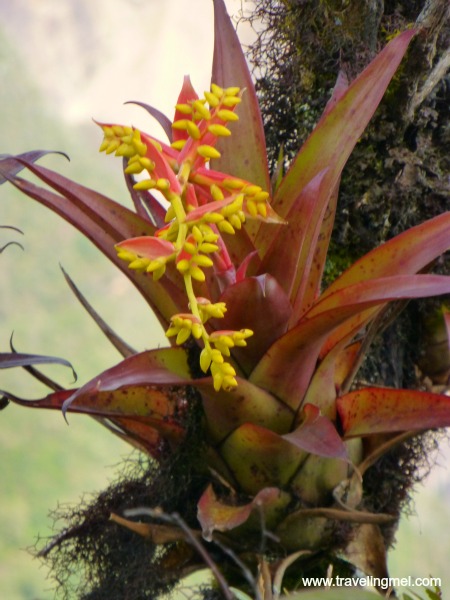 One of many bromeliads. 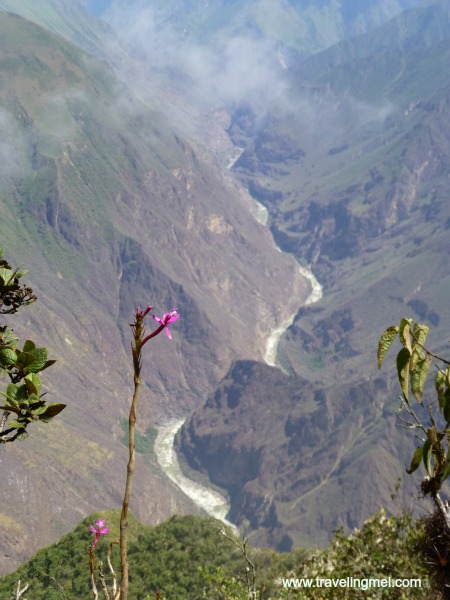 Heading down to the Rio Blanco. 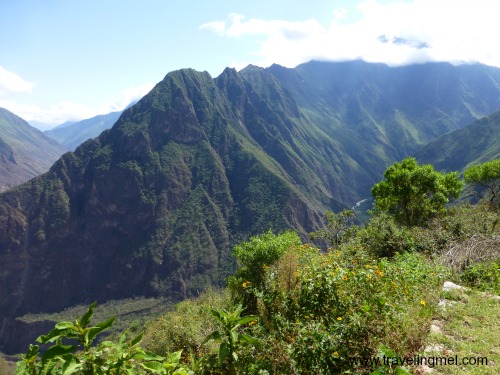 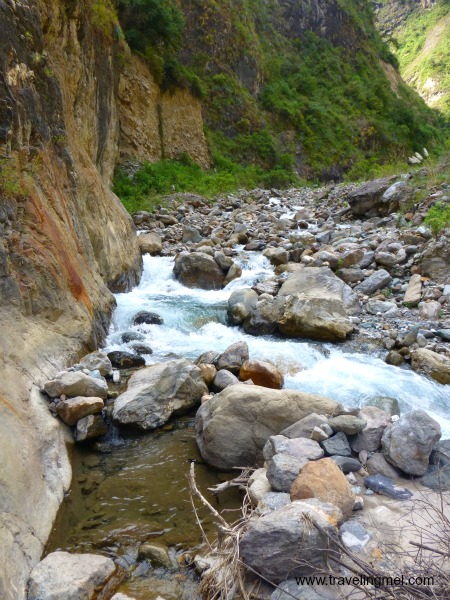 At the Rio Blanco and ready for lunch! 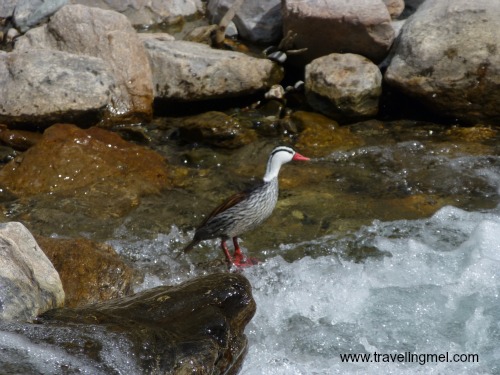 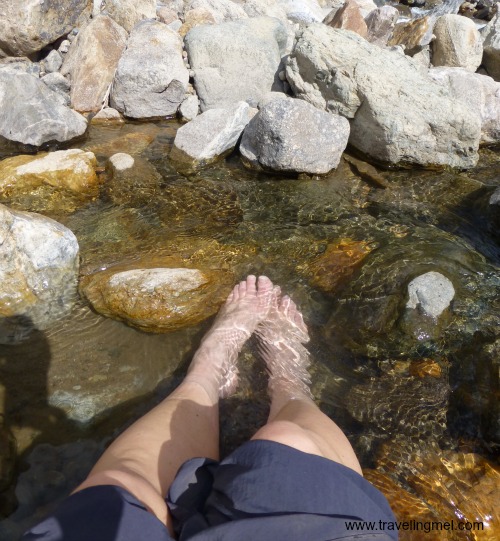 So happy to have my boots off.

After lunch we climbed 3,000 feet or so to our campsite. Some places were so steep and gravely that you slid back a bit with each step. As we closed in on the little farm that was to be our camp, I got to practice my cow herding skills and push several vacas up the trail. 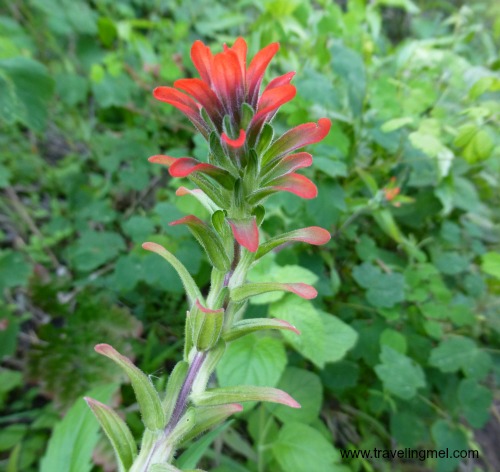 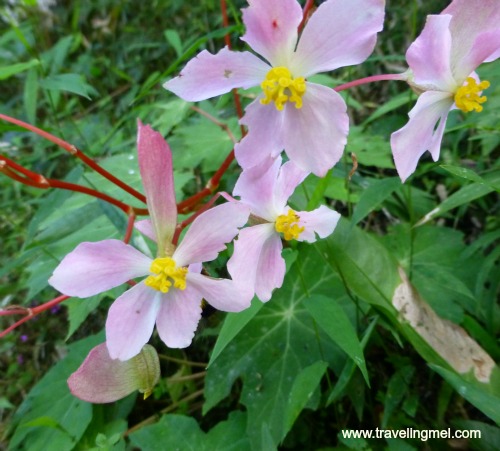 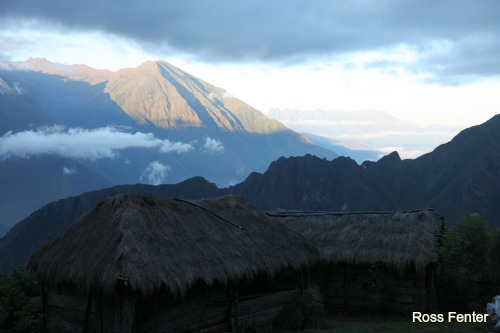 After settling into the El Maizal farm, Domingo made us the most delicious popcorn and tea. Famers grow corn all over the Andes at high elevations. The mountains are so steep (are you sick of hearing that?) that little farms have to be highly terraced–just like in Inca times.

Some of us took showers in a FREEZING outdoor shower. It was a step up from the hose with a water bottle nozzle we saw a couple nights before, but somewhat primitive. I wasn’t expecting to shower at all during the trek, so it was all luxury for me.

All the screaming I did in the shower must have attracted mosquitoes, because I was covered in bites after that. I had been smug while sweating in long pants while the rest of the group wore shorts and got massacred by the tiny insects. Not so much anymore.

As was becoming my habit, I was asleep by 9 pm and up around 4 am. Not the best schedule, but I did get a lot of early morning reading in. Fireflies were dotting the darkness like tiny, mobile stars. The baryard animals were asleep and pretty soon, so was I.