The other night I was laying in bed and it occurred to me that peeled peaches would turn brown. Unfortunately, this thought came to me after I had peeled nearly 60 peaches and left them in the refrigerator overnight.

Let me start at the beginning. I’ve been on a little freezing and canning romp. Most nights, after the boys are in bed, I scamper to the kitchen and get cooking. There have been soups, jams, pesto and other delights that we will be happy to have come winter. But you, loyal reader, already know that.

At the farmers market last week I was looking for peaches. None were to be found, but that put the idea in Mogie and Big H’s heads that I was on the lookout for peaches.

When we arrived at the Harrison House in Ennis on Saturday there was a huge box of peaches waiting for me. (More on our trip to Ennis later. I think the photos are on H’s camera.)

Monday night I made the curried carrot soup. It didn’t take long so I thought I’d make some peach jam, too. Do you know why you don’t see peach jam very often? It’s because you have to peel the peaches. This involves boiling water and an ice bath. It took longer than I expected, so after peeling the peaches, I put them away to deal with another day. 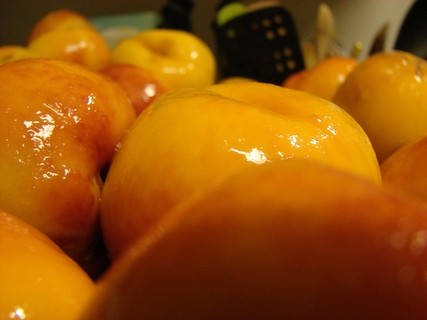 That is how I ended up staring at our glitter-popcorn ceiling (I know, it’s awful) thinking about brown peaches.

Tuesday I had to work on bringing home the bacon rather than the peaches, so I spent the day in Bozeman. As soon as the boys were asleep that night, I checked on the peaches. Brown.

The upside was I had pitted and mashed most of them. It was easy to scrape the very thin brown layer off the top of the bowls. Very few peaches were lost. The whole peaches took a bit more work to recover, but I did it.

Then I made peach jam. 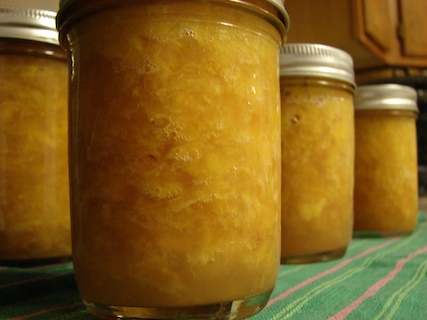 Since there were so many peaches I also made this peach-tomato salsa. 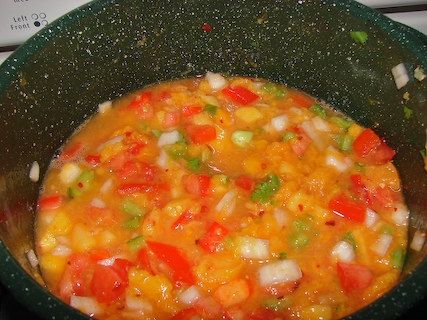 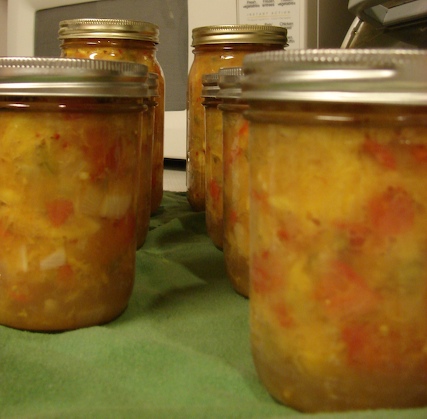 I used about half the cayenne pepper the recipe called for, but it still has a bite to it. Yummy, though. Next time a few more jalapenos and a little less cayenne.