River reporting was more fun when I was just talking about high, muddy water. Now that we have an oil spill, it’s just sad. I guess the high water wasn’t so fun for the people downstream like the couple whose bed and breakfast flooded, sheds washed away and several calves died. 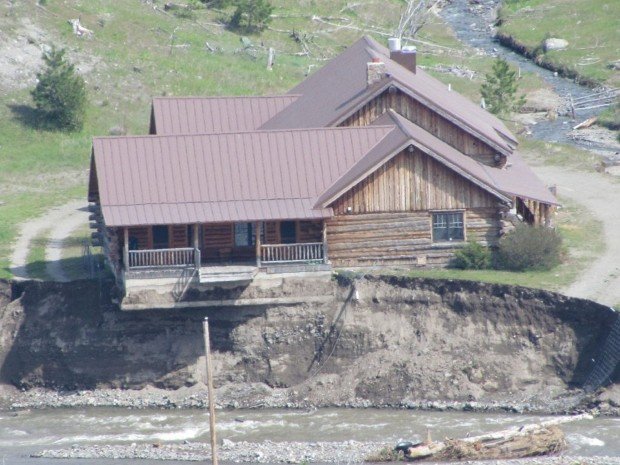 A photo showing the eroded bank under the Burnt Out Lodge near Big Timber after last month’s flooding. The pole in the foreground is a power pole on the opposite side of the creek from the lodge.
From http://billingsgazette.com/news/state-and-regional/montana/article_9c018f30-729d-52c6-b8c3-bb7f5332db1a.html#ixzz1RLhhylD6

But, the oil spill is worse.

An article from MSU News Service (where I work, but not my article) reported:

“More than 750 barrels of crude oil spilled into the Yellowstone River when a pipeline beneath the river broke creating a plume of oil that has already traveled more than 270 miles downriver into North Dakota, according Montana Governor Brian Schweitzer.”

More good news for people downstream of us.

The Seattle Post Intelligencer reported that Exxon Mobil lied about how long it took them to plug the leak. Why? An hour seems respectable for fixing a pipe in flood stage river. They just had to make it worse. For once, I wish a big company would just say, “Yeah, we f*ed up and now we are fixing it.” That’s what I tell my kids to do (with nicer language).

“Federal documents show Exxon Mobil Co. told concerned regulators that an oil pipeline beneath the flooding Yellowstone River was 12 feet beneath the riverbed a month before the line broke and spewed an estimated 1,000 barrels of crude into the waterway.

“Details about Exxon Mobil’s actions leading up to the Friday night spill emerged as the Department of Transportation ordered the company to bury the 12-inch pipeline more deeply. The cause of the pipeline’s failure remains under investigation, but the prevailing theory is that the raging river eroded the riverbed and exposed the line to damaging debris.

“The documents also show it took Exxon Mobil almost an hour to fully seal the pipeline after the accident  nearly twice as long as it publicly disclosed.

“An Exxon executive told Gov. Brian Schweitzer on Tuesday that it took only 30 minutes to seal and stop the flow of crude into the river. The company hasn’t responded to Associated Press requests for a timeline.”

Oil swirls in a flooded gravel pit in Lockwood, Mont. after a pipeline break early Saturday, July 2, 2011. The ExxonMobil pipeline that runs under the Yellowstone River near Billings in south-central Montana ruptured and dumped an unknown amount of oil into the waterway, prompting temporary evacuations along the river. Photo: The Billings Gazette, Larry Mayer / AP

MSU is researchers and students are helping to understand the impact of the leak.

“Biologists with the U.S. Fish and Wildlife Service and the Montana Department of Fish, Wildlife & Parks are being provided data on fish diversity and abundances collected by university scientists earlier this summer and in previous years. Ongoing sampling will document any changes to the river that may have occurred as a result of the oil spill. University biologists will provide FWP with GPS locations of sick turtles and fish, as well as document obvious fish kills if any are found.” 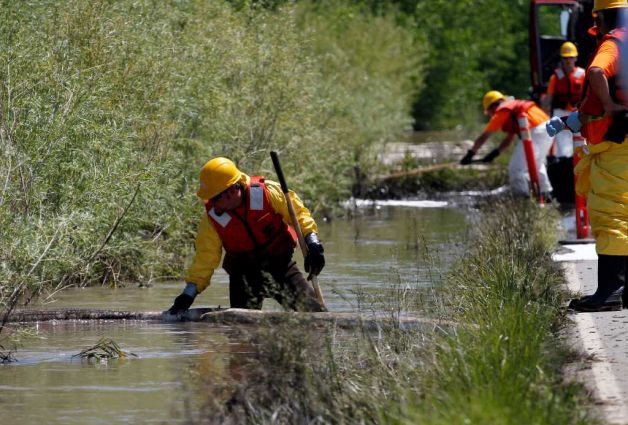 Cleanup crews work to clear oil from along side the Yellowstone River in Laurel, Mont., Tuesday July 5, 2011. The Yellowstone River swelled above flood levels Tuesday, raising fears that the surge will push thousands of gallons of oil spilled from a broken pipeline into undamaged areas and prolong cleanup efforts as crude seeps downstream and into back channels. AP Photo/Jim Urquhart) Photo: AP / AP
From: http://www.seattlepi.com/news/article/Exxon-claimed-failed-Mont-pipe-12-ft-under-river-1452327.php#ixzz1RLn3K4pL

Our cowboy governor did say: 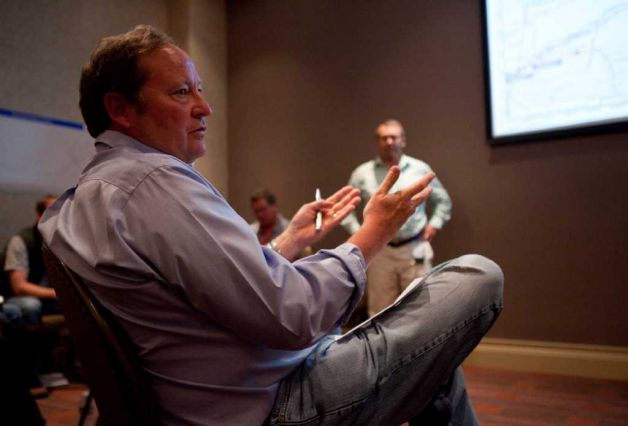 Montana Governor Brian Schweitzer asks questions of ExxonMobil representatives during a briefing about the oil spill in the Yellowstone River, Tuesday July 5, 2011, in Billings, Mont. An ExxonMobil pipeline near Laurel, Mont., ruptured last Friday and spilled an estimated 1,000 barrels of crude into the Yellowstone . Photo: Jim Urquhart / AP
From: http://www.seattlepi.com/news/article/Exxon-claimed-failed-Mont-pipe-12-ft-under-river-1452327.php#ixzz1RLnJqkVU

I hope he sticks to that.

If you have additional or updated info, please leave it in the comments–I’d love to see it.

1 thought on “Oil spilling into the Yellowstone River”