Today was much more pleasant than yesterday’s cryfest. I only took one picture, so use your imagination. It will be a nice break because there are a lot of pictures coming up in the next post.

We started the day with a yummy buffet breakfast at our hotel–Hotel Huemel. Then to the lake to play with rocks. Anders picked up a rock, put it in his mouth to taste and threw it on the ground. Then repeated this procedure about twenty times. He never found a rock worth eating. However, there were many good candidates for throwing in the water.

After the rockstravaganza we walked up to the town center where there was an art fair/sale and a few folks carving sculptures with chainsaws. Santa Samana is a big deal here and Bariloche is a popular vacation spot for folks from Buenos Aires, so the city was much more crowded than last time we were here. Much more festive, too.

I enjoyed hot chocolate and shared a snack with Anders at a café (the hot cocoa comes with two packets of sugar. This has to be the most sugared up place I’ve ever been. People put it in their orange juice. It’s the second ingredient in baby cereal…). Then we headed to the bus station.

Henry was waiting at the bus station (I actually don’t know how he got there, but somehow he got from the fishing lodge to the station, but had about 2 hours before his bus left for Buenos Aires–no plane tickets available on Easter). We all headed to the hotel for a couple hours so Henry could shower, eat and hang out with us a bit before his 17-hour ride.

After Henry left, Anders and I messed around a little, watched a sitcom, and then went to the chocolate museum.

I’d been looking forward to the chocolate museum since the first time I read about it back in Montana. What the Foder’s guidebook did not say was that you have to take a tour–no free roaming in the chocolate museum. And there is only one English tour a day–it left 45 minutes before we got there. The man at the desk thought the Spanish tour might be a little “advanced” for me. He did give Anders and Easter headband. 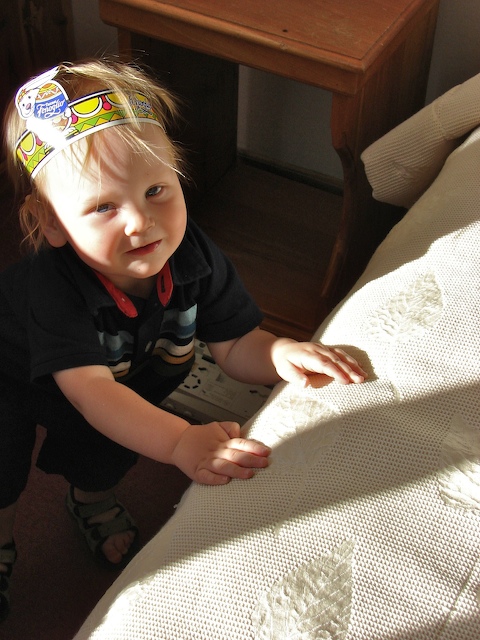 Anders in his Easter headband.

That was about it for the day. I packed up that evening and got ready for our flight to Buenos Aires the next day.