How many people do you know who have won an all expense paid trip to Niehart, Montana? Probably just one–me.

“Where is Niehart?” you ask.

Why, it’s about 100 miles north of Livingston. Past White Sulfur Springs, but before you get to Great Falls. It’s about eight miles beyond Kings Hill Pass, the highest pass in Montana that is kept open all winter. If Kings Hill Pass sounds familiar, it’s because we stayed at the Kings Hill cabin last year. (Or because you know your Montana locations.)

Thanks to Visit Montana and their “Get Lost in Montana!” campaign, we were treated to two rooms (one night) at Bob’s Motel, dinner for four and four lift tickets to Showdown ski area. They were requesting people write about their favorite ski run. I did and I won. It’s just a few sentences; obviously not than many people enter. Clearly it was too much for one small family, so we invited Brooke, Peter and Matine along to join in the fun.

We stopped in White Sulfur for a soak at the Spa Hotel. I think it is impossible for us to drive through this small town without a stop at the hot springs. Then lunch and on to Niehart. 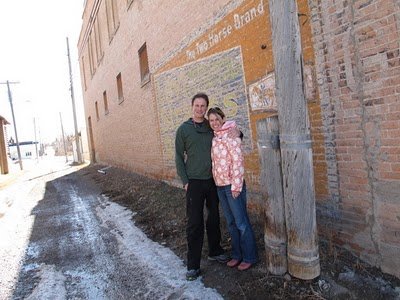 Peter and Brooke in White Sulfur Springs. So cute. 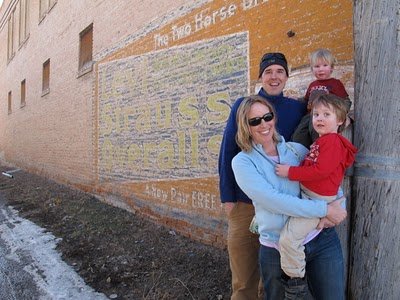 The chaos that is the family photo. 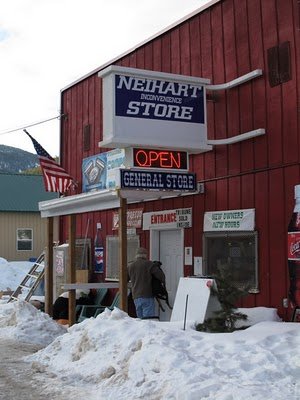 The INconvenience store in Niehart. 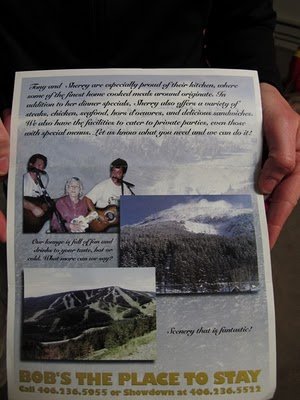 Bob’s is the place to stay. Unfortunately, we did not see this band.

After checking out the motel (note: request rooms that are not behind the hot tub) we donned our cross-country ski gear and drove a few miles to the Silvercrest Ski Trails. Brooke and Peter are nicer to their dogs than we are and took off on a snowmobile track. We left ours in the truck and kicked and glided along the no-dogs-allowed groomed ski trails.

Anders skied about 1.5 miles with me while Henry hit the hills hard, then I packed up Finn and got a bit of exercise. I can’t believe how much Anders will ski. This bodes well for future winter fun.

One of my favorite things Anders said this weekend, and there were many, happened while we were cruising down a hill. He was standing between my skis while I held him up and said, “this is just like riding a unicorn–it’s so fast.” 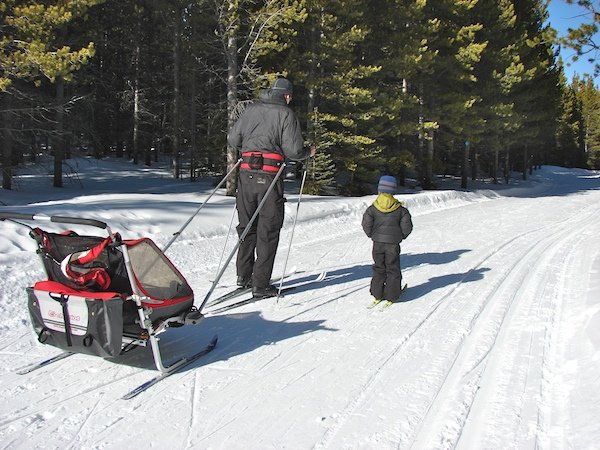 Henry, Anders and Finn set off on the trail. 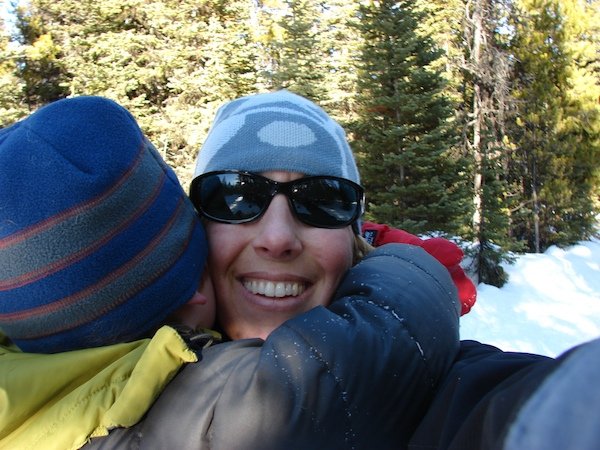 Anders would rather hug than sit for a photo. 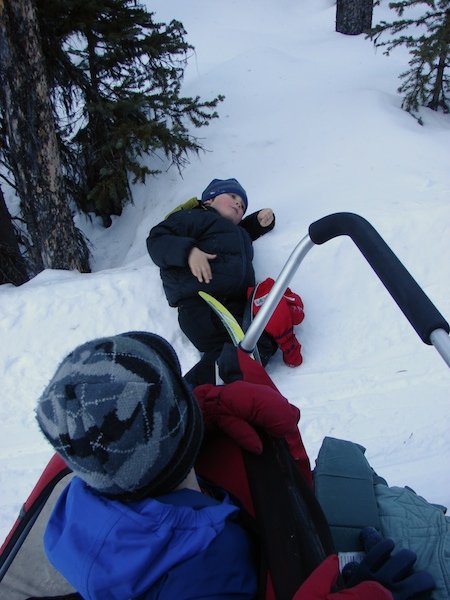 Down for the count. 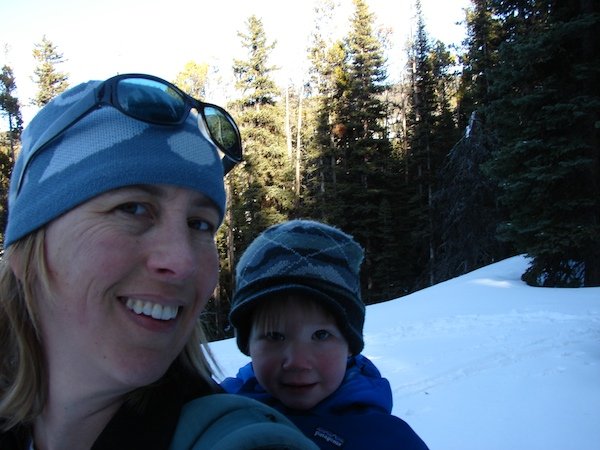 After skiing, it was back to the hotel for dinner, blowing bubbles, art and sleep.

We got up early and were at the ski hill when it opened. That’s not true at all. We dawdled around the rooms, packed up, walked dogs etc before driving up the hill to Showdown where we promptly sat around for a while eating breakfast. 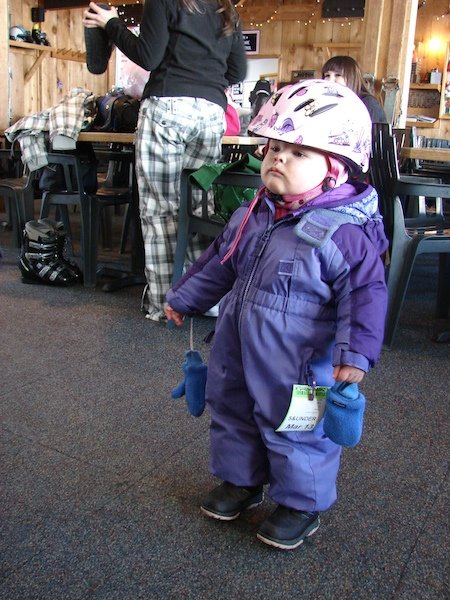 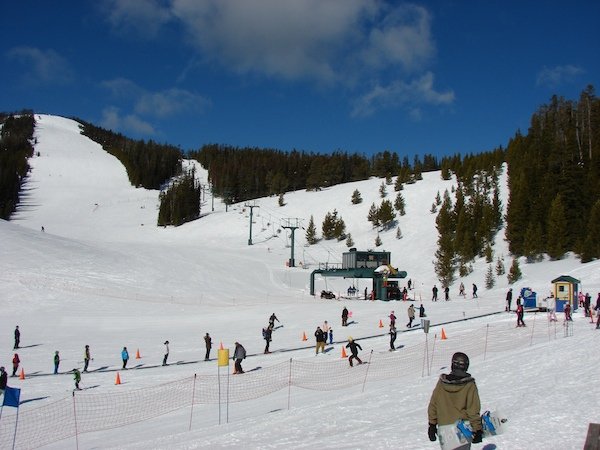 I haven’t downhill skied since high school and I was pretty terrible then. I’ve Telemark skied a bit, but I’m not much better with those boards. Still, I rented skis and hit the slopes. The bunny slope, that is.

Anders and I rode the Magic Carpet and practiced skiing down the almost imperceptible hill. Brooke used to teach skiing to kids, so she helped Anders, which was a huge help. Then I took Finn for a run (Henry didn’t ski, but rather staffed the camera and hung out with whatever kid wasn’t skiing). After a handful of runs on the bunny slope, Anders wanted to ride the chairlift. 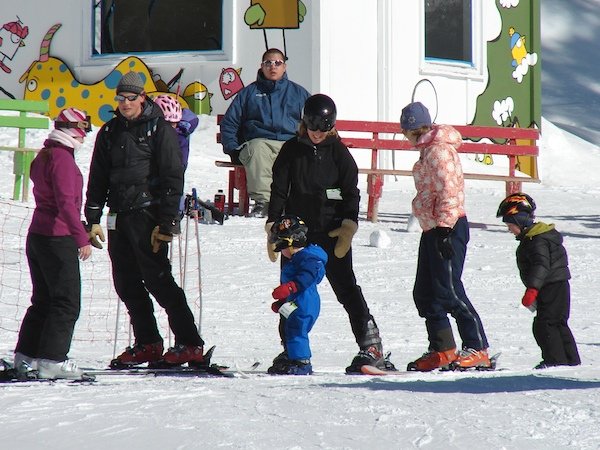 Peter, Finn, Melynda, Brooke and Anders wait in line for the Magic Carpet. The kids loved riding that thing. 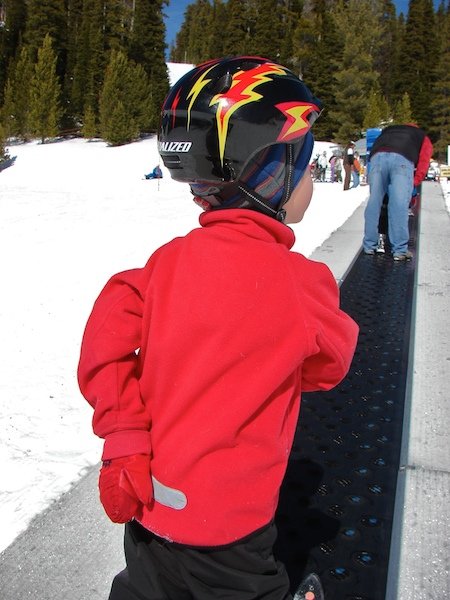 Anders on the Magic Carpet. 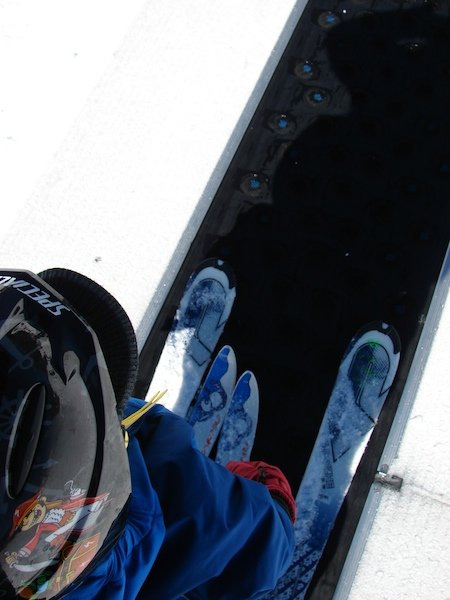 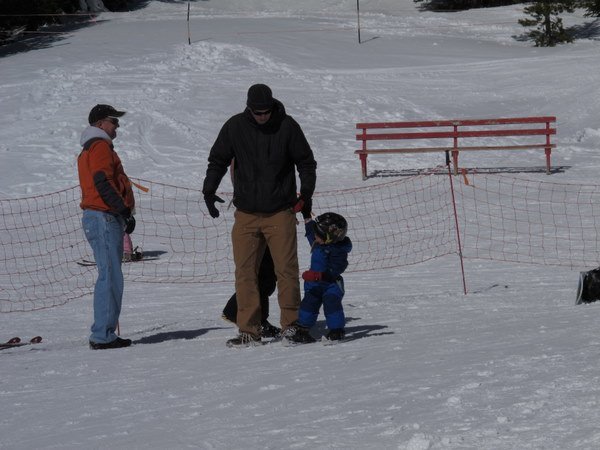 Henry hoofs it up the hill to help Finn. Who needs skis to ski? 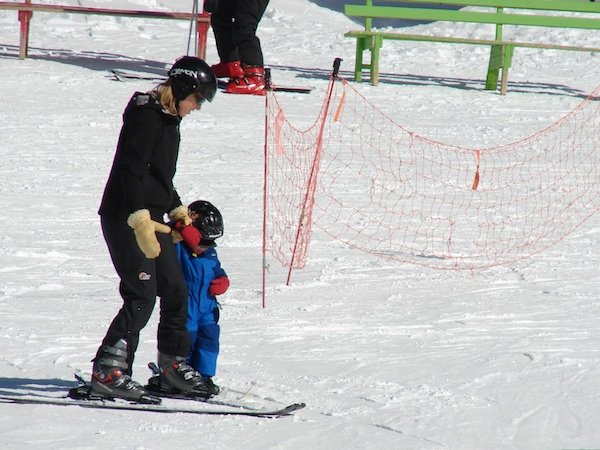 Yes, I am wearing a helmet on the baby hill. I want to set a good example for my kids. Plus, there were some reckless munchkins on the loose. 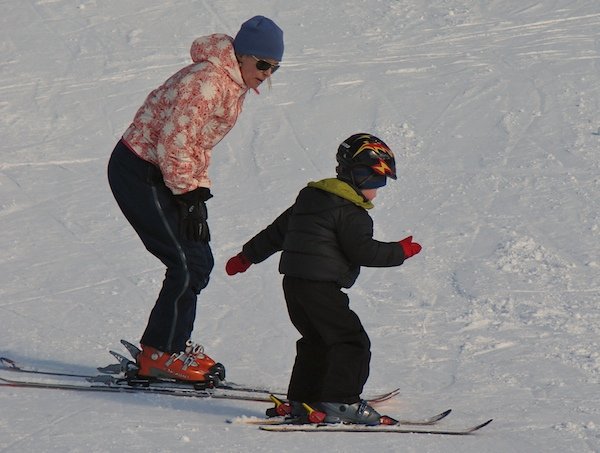 Anders gets a lesson from Brooke. 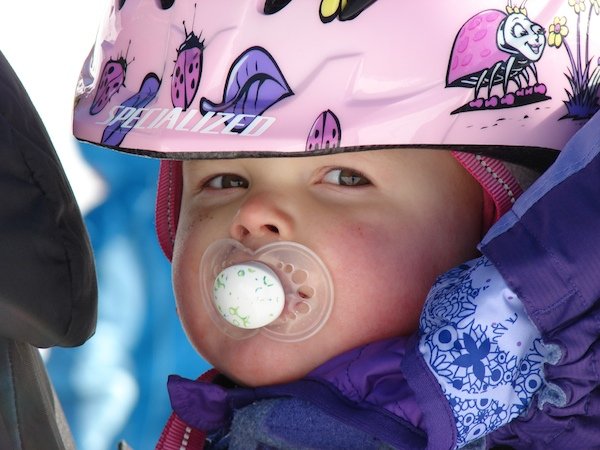 Matine got to ride in the backpack. 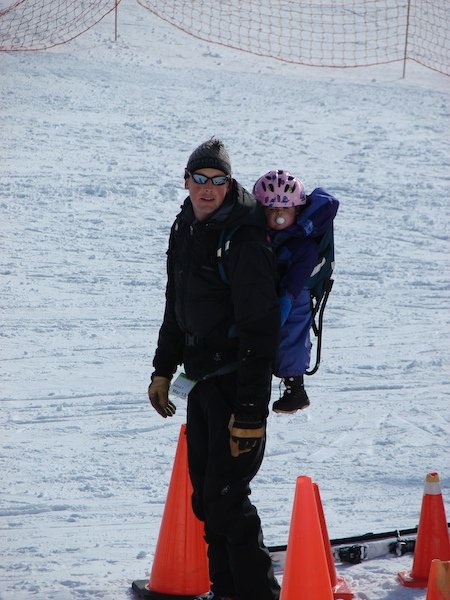 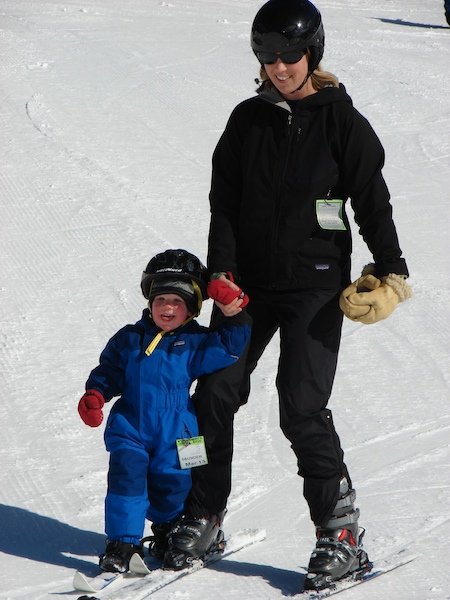 In our kids’ minds, skiing is just something you do to get down the hill so you can ride the lift again. Anders was enamored with the lift. He kept saying how beautiful the mountain was (be still my heart!) and how he had never been that high up, except for in an airplane. 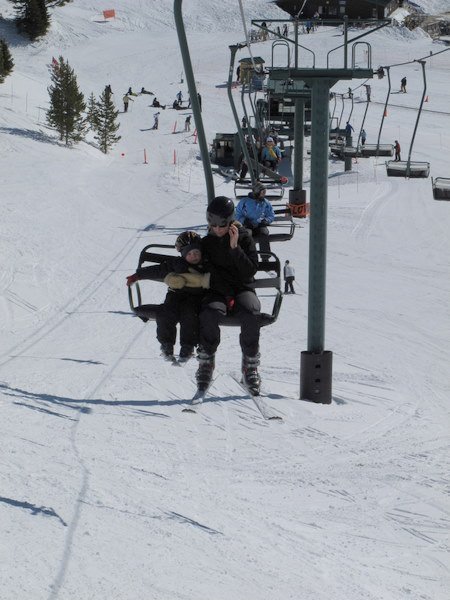 Anders is psyched to be on the chairlift. 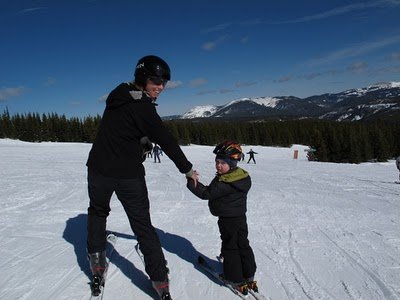 At the top of the hill, ready for the big ski down.

He did pretty well at first, with Brooke’s assistance. When it all got to be too much I let him ski between my skis while I held him up. My back was killing me, but I wanted to win the “good mom” award, so I kept going.

Of course, Finn had to take a ride on the lift, so we went up next. He loved riding, too. I had to bend down even farther to keep him up, so I am expecting my award any day now.

There were a few more laps on the magic carpet before we drove home. Finn slept the whole way and the rest of us listened to Dr. Suess books. We had such a fun time skiing; I hope we can figure out a way to go again this winter. Let me know if you hear of any contests… 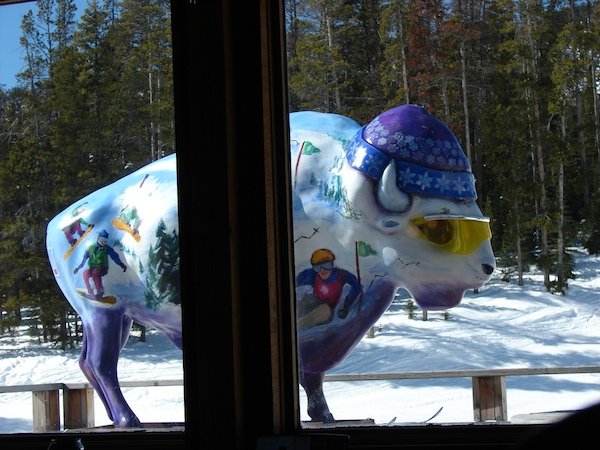 A bison spotted outside the cafeteria.

You can see Brooke’s photos here (some of these I stole from her website and FB page. Thanks, Brooke!)