About a month ago we started asking Anders what he wanted to be for Halloween. He said “Diesel”.

I thought, “After all I’ve done for you; carried you in my body, birthed you, stayed awake for 13 months, given up so much, you want to be Diesel? Not Rigby?”

Not that there is anything wrong with Diesel; he’s a lovely dog. But, he’s not Rigby.

After I got over the betrayal by my eldest son I started contemplating the Diesel costume.

Then I asked Finn what he wanted to be for Halloween. He said, “Ba baba abababab bababa,” and stuck his finger up my nose. Then he laughed uproariously. I was so glad he wanted to be Rigby that I ignored the nostril poke.

Dog costumes are super easy, at least the way I did it. I got a couple hat/mitten combos at Target, sewed a little pink material into the mitten, sewed the mittens to the hats and called them ears. Next I dressed the boys in mono-colored clothing and stuck a tail on their rear ends. Dog collars added a special touch. I was going to give them a stink bath for added authenticity, but ran out of time.

(Disclosure: my mom sewed the Diesel ears while she was out here. That’s how you make costuming easy.)

We started the evening at a birthday party for twins Kiris and Gray. They turned three. 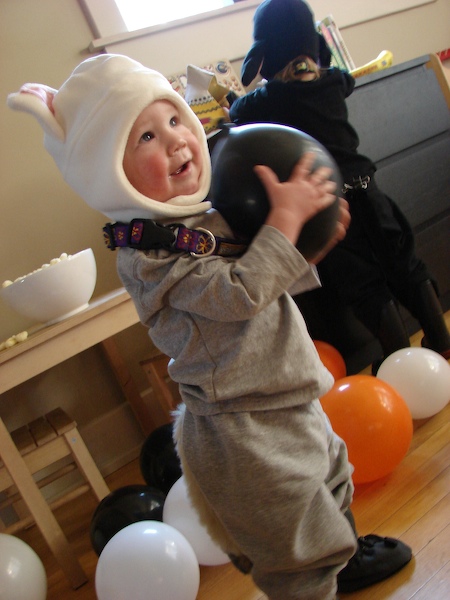 Rigby/Finn digging on the balloons. 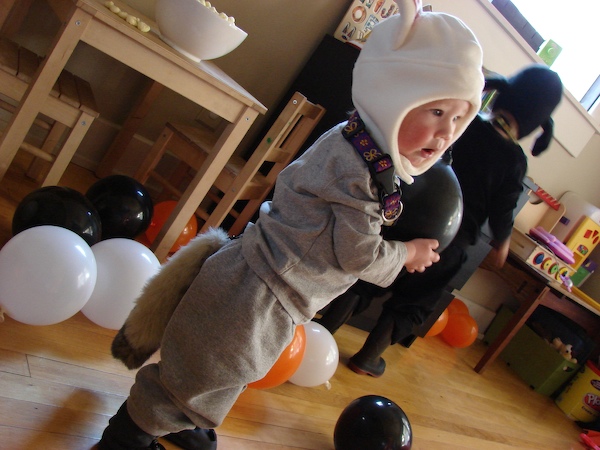 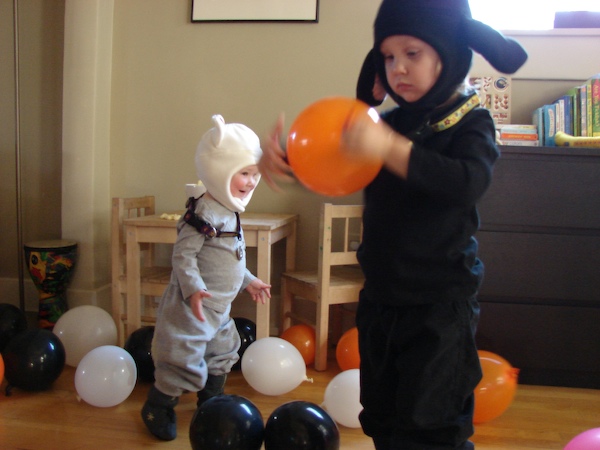 Diesel/Anders is cautiously optimistic about the fun he can have with the balloons. 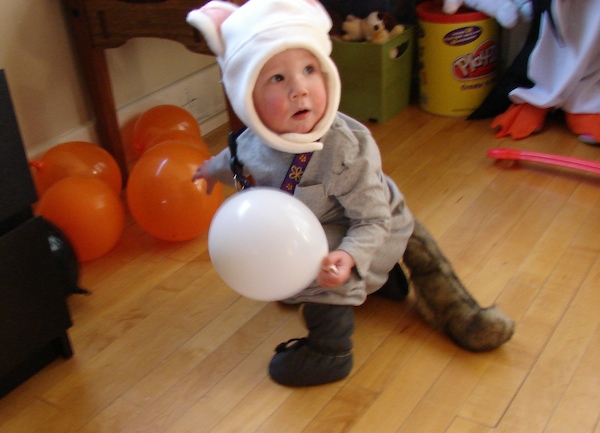 “Nice tail,” all the girls said. 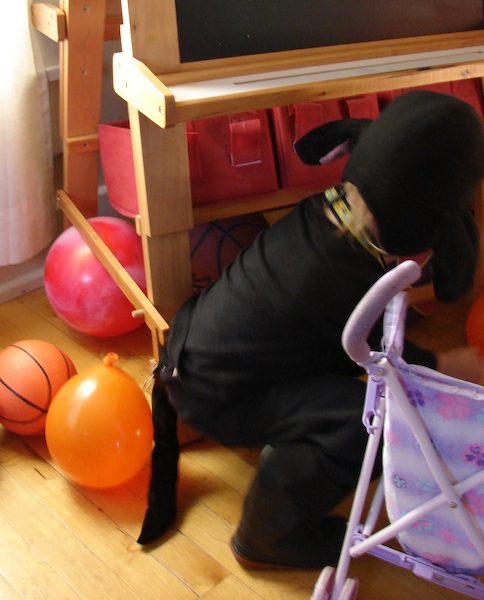 Anders got the homemade tail that was clipped to the tag of his too-big pants. It’s impossible to find pants in black, in the size you need, right before Halloween. Maybe there are some disadvantages to waiting until the last moment… 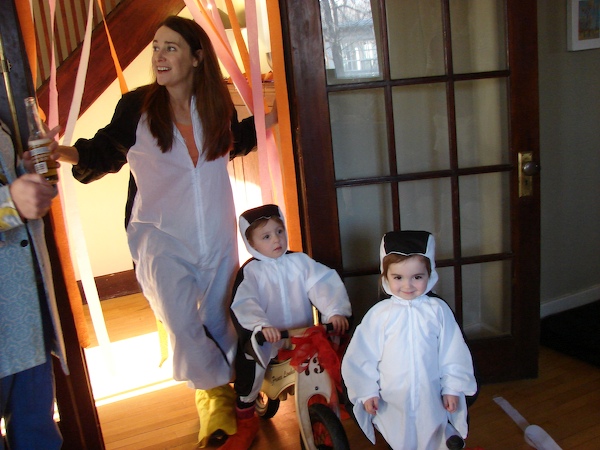 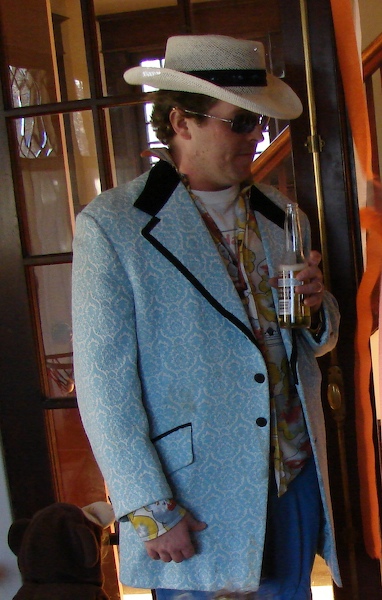 This guy just showed up off the street. 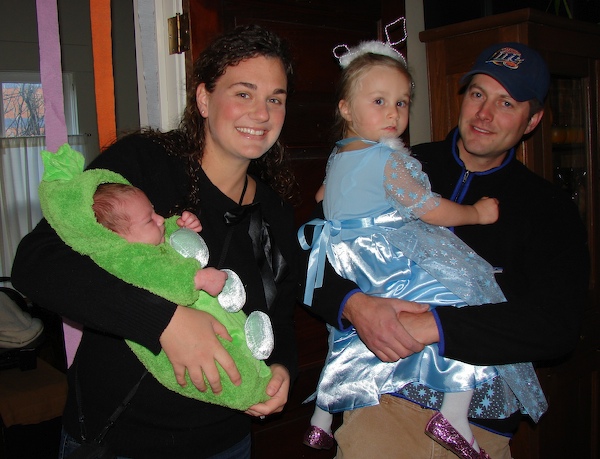 Super sweet picture of the princess and the pea and their parents, Tiffaney and Jeff.

The boys were getting a little antsy so we took a walk down the street for some trick-or-treating. 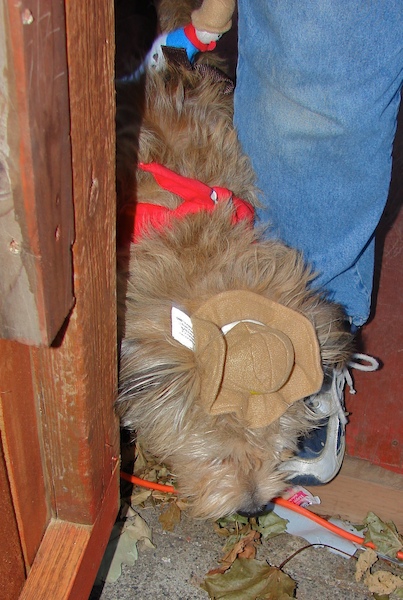 This dog is wearing a cowboy hat and has a little rider on his back. This gives me a great idea for Rigby’s costume next year. Although dressing him as the Big Bad Wolf in grandma’s nightgown and bonnet (and me as little red riding hood) one year was pretty clever. 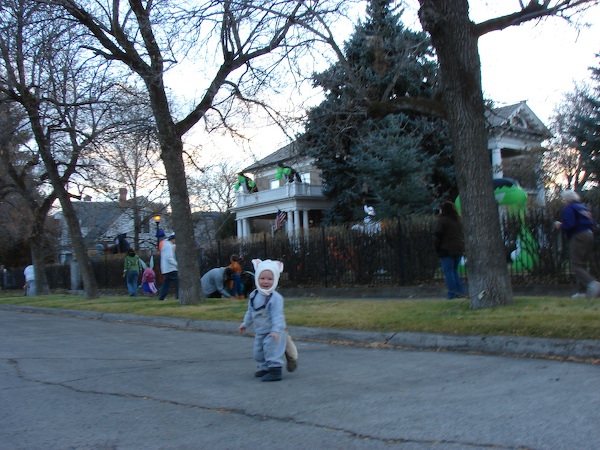 Finn had no qualms about running around in the street (closed to vehicles, of course) with a bunch of costumed kids and adults. Anders is hanging on me, causing all my photos to be blurry. Well, that and the low light. 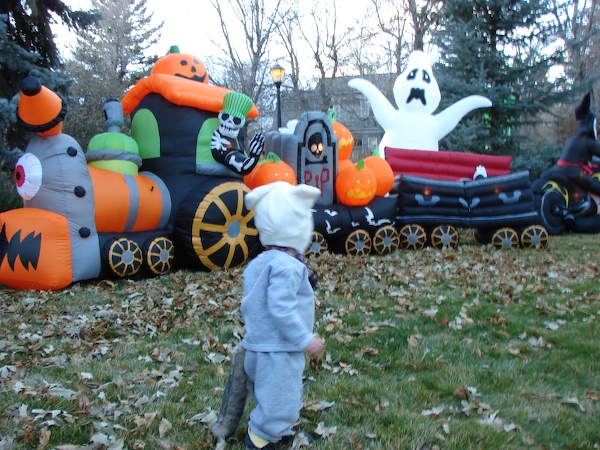 Checking out the spook train. 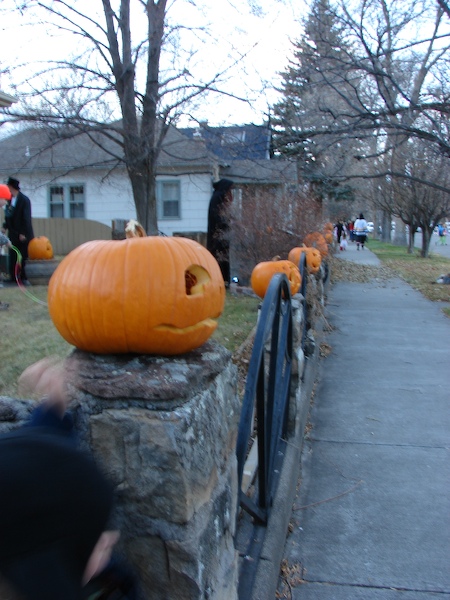 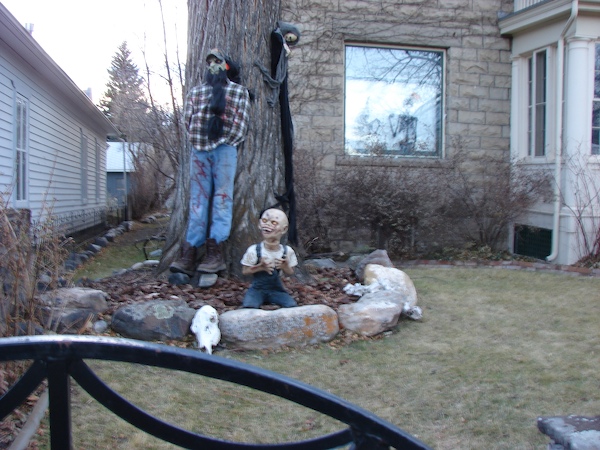 We got back to the birthday party just in time for singing and cake. Delicious. 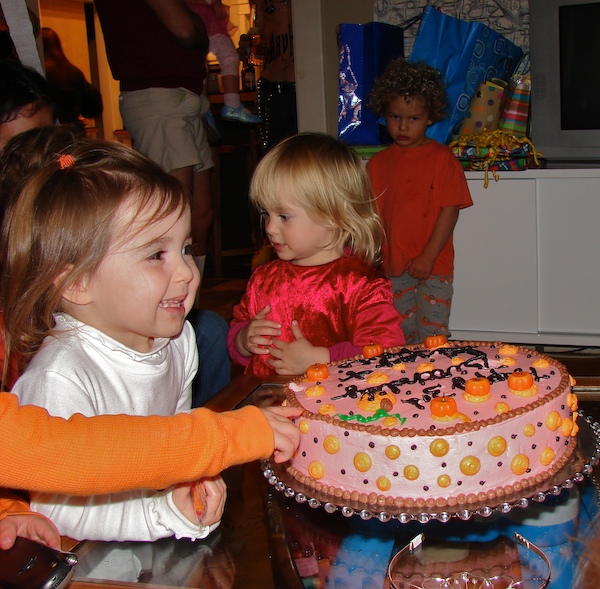 The prettiest cake I have ever seen at a kids’ birthday party. I’m a little envious because I do love a pretty cake.

The boys were getting the hang of the trick-or-treating thing, so we left the birthday party and hit the streets once more on our way to our next party.

At Ian and Gigi’s house there were more friends and more yummy food. We pretty much hit the jackpot on friends and food on Halloween. Ian and Gigi have two little girls and a dollhouse in the livingroom. The dollhouse was surrounded by four little boys at one point, while the girls entertained themselves elsewhere. 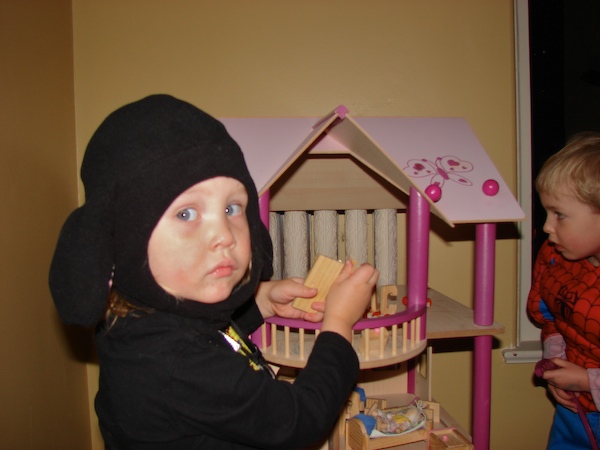 So psyched and not tired while playing with the dollhouse. 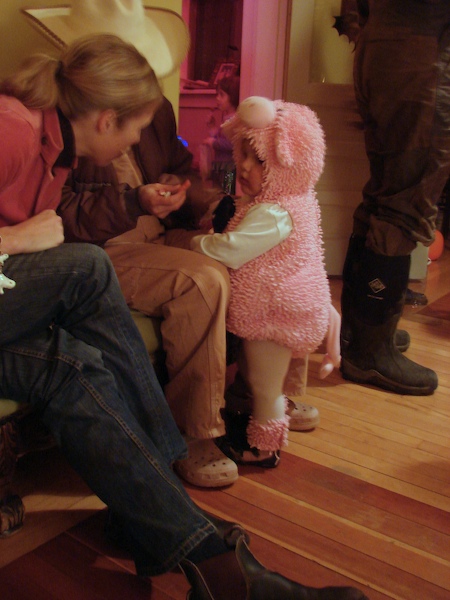 By about 7:40 we were done. A little more trick-or-treating on our walk home–then bed. Both dogs/boys were asleep within a minute of laying down. 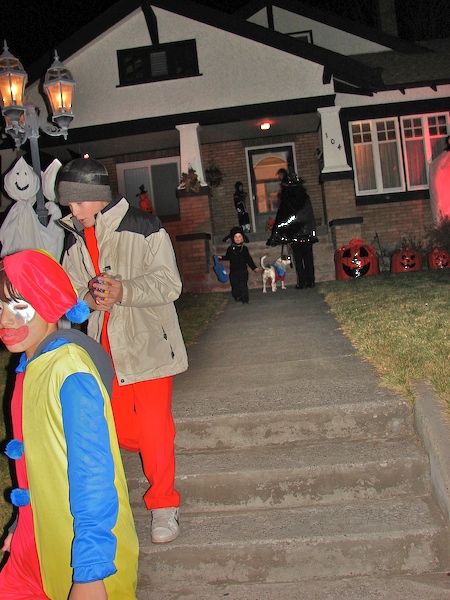 That’s Anders at the top of the steps trick-or-treating by himself.

As for the candy, I put it in the cupboard and Anders didn’t ask for it today. I’m not going to bring it up. He got great candy–lots of chocolate–so I figure I should eat it and save him from dental disease and childhood obesity. I’m a good mom like that.