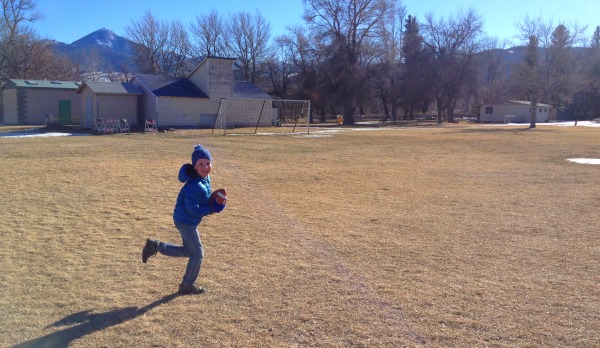 Yesterday, was a lovely day. It was 40-degrees, sunny, and most importantlynot windy.

The boys wanted to go to the park to throw a football back and forth. Im all for the park, we need to get outside everyday for everyones sake, but football? Ugh.

There are a lot of different names and philosophies for not sending kids to school. I usually say we homeschool because thats easiest for people to understand. It doesnt exactly explain what we do, but if someone really wants to know theyll ask more questions.

We are life learners. My hope is to foster a love of learning, an ability to find needed information, and to raise out-of-the-box thinkers. I teach compassion, mindfulness, physics, reading, how to clean a toilet, and that this world is an amazing place filled with love, beauty, heartbreak, and inequalities. The boys teach themselves all kinds of things.

I have no idea what kind of jobs my kids will have when they grow up. When I was six or seven, I never imagined I be a social media manager, a blogger, or freelance writer that submits articles from my couch. 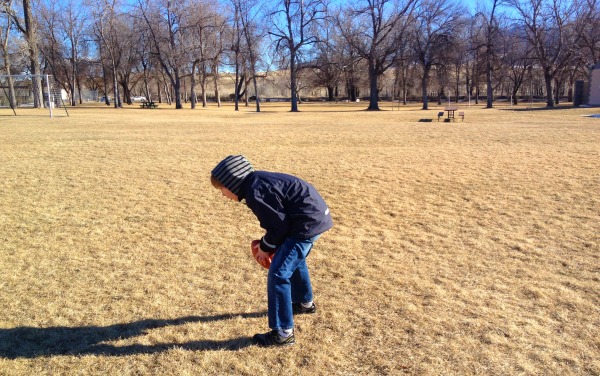 Anders attempts to hike the ball.

We are interest-led learners. By letting the kids dive into things they’re interested in, so the thinking goes, they will dive deep, work hard, learn more, and stick to it. I give them space and opportunities to explore the things that grab their attention.

The reality is that most of the things that they are interested in are really boring to me. Ninjas. Lego. Minecraft. Angry Birds. Weapons of all sorts. And now it’s football.

Personally, I dislike all organized team sports. Too much pressure to do well for others. Too much depending on others to make me successful. That says a lot about me.

But I don’t want to push that on my kids.

The boys play soccer (the most bearable of all the team sports, in my opinion), and floorball, in addition to the solo sports like hiking and cross-country skiing. Lately, they’ve been really interested in football. Seriously?

So like a good interest-led homeschooling mom, I have been facilitating that interest.

For Anders, it mostly means knowing where each NFL team plays, what their mascot is, and then spending hours locating the stadiums on a map. He’s also the kid who spent more time coming up with the brand and mascot for his soccer team, along with the backstory, then actually playing soccer. I may be exaggerating a little, but that happened.

Some of his friends have been really into football too, but actually play not just looking up geographic locations of football stadiums. So I checked in with both boys and asked if they would like to get a football and learn to throw it. Then I got Henry to teach them how to throw and catch. Remember, I don’t do team sports. 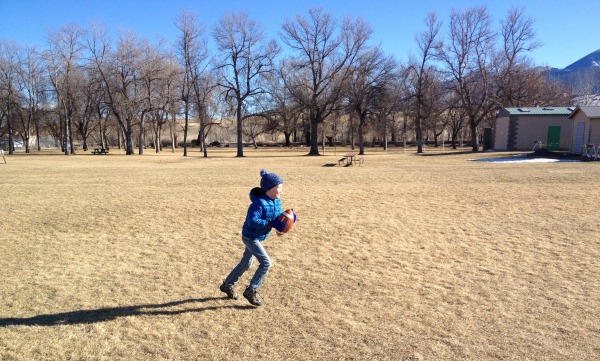 Finn runs the field (is that even a football term?).

As it turns out, even though our kids are into the very boring subject of football, they are learning about geography, racial stereotypes (think the Redskins), and gaining some motor skills along the way. My friend, Tiny Jen, suggested looking into where the teams got their names, something she did in school. Knowing why the Packers are the Packers, is right up our kids alley.

So, while the boys throw the ol pigskin around the park, I get to do laps on the half-mile perimeter and get a little exercise. Im into interest-led learning, too. Yay for football!