This is from my 2004 trip to Belize. Since I am currently in Belize, I am republishing both for my own memories and to share with you. 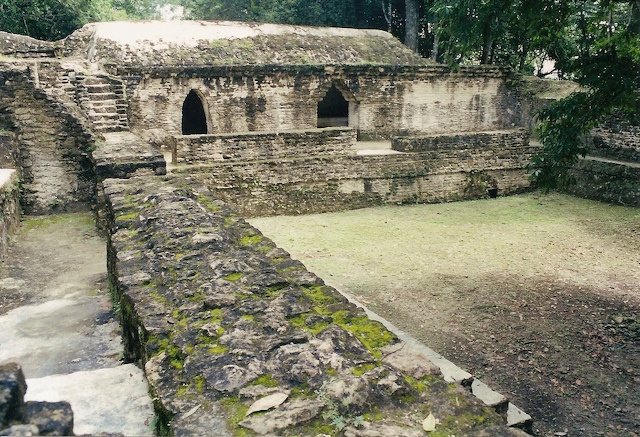 At the top of a hill near San Ignacio, in the Cayo District (Belizes largest), sits Cahal Pech, the oldest known Maya site. These ruins of a Maya ceremonial center were unfortunately named in the 1950s when archaeological digs were just beginning here and this area was a pasture. Cahal Pech translates to Place of the Ticks.

From San Ignacio it is a fifteen to twenty minute walk uphill to reach the ruins or an quick taxi ride. The visitor center shows an entertaining and educational video about the excavation of Cahal Pech and the Mayan lifestyle. Also in the visitor center are Mayan artifacts and models of what the center looked like in its heyday.

Immediately outside the visitor center lies Cahal Pech, its well manicured lawns, plants in shades of pinks, yellows, and every type of green imaginable. Geckos dart up and down large-leaved bromeliads and birds chirp and sing in the trees.

Pyramid temples, ball courts, palaces, and carved stelae (monuments) show evidence of some of the earliest Maya settlements in Belize, likely beginning 3,000-3,200 years ago with continued occupation running through the Classic period. Around 1,200 years ago, the center was depopulated earlier than other centers in Belize, but nobody knows why.

Excavation of the site began in the 1950s, but there are still large mounds yet to be uncovered. Passing these mounds, it’s interesting to try and imagine what still lies buried under the ever-growing jungle.

This site was pillaged repeatedly in the 1970s and 80s, and while some looters were caught and prosecuted, many were not. In 1988 archaeological work restarted at the site, ending the pilfering.

Walking around the quiet grounds it’s easy to imagine rituals and ceremonies taking place here. The average Maya probably lived nearby in a thatch-roofed hut in the jungle and came to Cahal Pech for community occasions.

There are several caves upriver where archeologists have found evidence of rituals including the remains of corn, cacao, and anato seeds. Skeletal remains of infants and adults indicate human sacrifices, probably to the gods of rain and agriculture.

Mosses cover some of the stone, making for a slippery walk in sections, and ferns sprout from old walls. Few people visit these ruins compared to nearby Tikal, so visitors often have the place to themselves to duck through short archways and peer into sleeping centers.

Fortunately, ticks are not a problem for the tourist at Cahal Pech –The Place of the Ticks–and quiet time to explore the past is guaranteed.