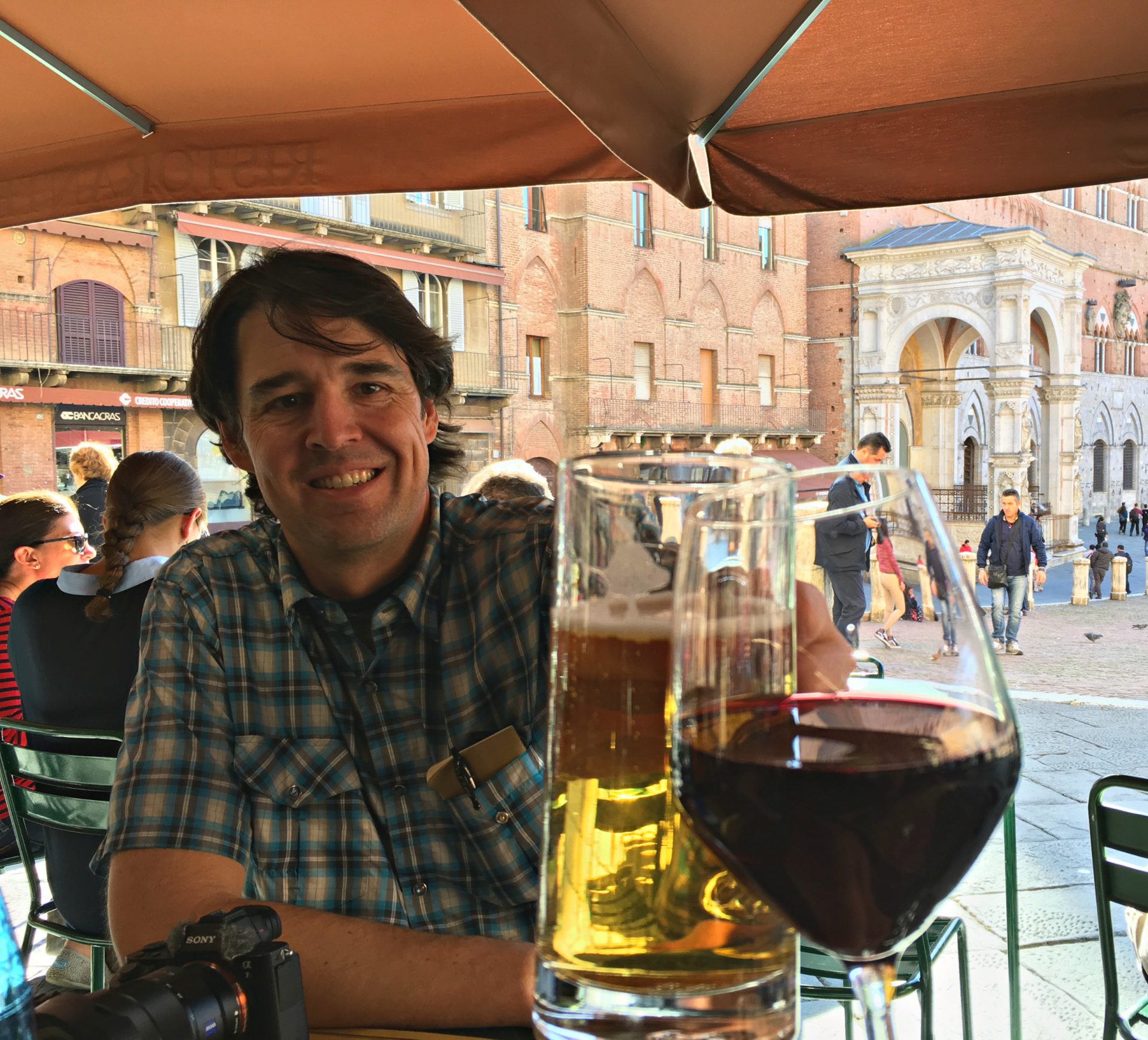 We didn’t plan to spend the weekend exploring Siena. The idea was to stay there, but take the bus to Montalcino each day for the Sagra del Todro or Festival of the Thrush (the Porcini Festival, in my mind).

My friend, Mariann, went last year and spoke highly of the festival in a little town in Tuscany. I wanted to eat as many mushrooms as I could while exploring a small hill town. Henry wanted to eat cute little birds on sticks.

As it turned out, public transportation is a pain in the neck. We took a bus to Siena, walked 2 km to our villa and spent the night. The next day we took a city bus back to Siena and then looked for the bus to the other bus stop. It took us longer than we expected and by the time we got to the third bus stop, we missed the bus. Disappointed, we walked back to Siena.

Once we got over ourselves, we had a lovely weekend. Siena is quite pretty. Gabriel García Márquez said of Siena’s town square, the Piazza del Campo, “I had always believed, and continue to believe, really, that there is not more beautiful square in the world than the one in Siena.”

I don’t know if I agree with that, but there is a definite feeling when you are sitting there that you are somewhere special. First, it’s not a square, but a sloping fan. Second, the building at the bottom of the fan, the Palazzo Pubblico is a city hall and museum. Most Italian towns have a church as their focal point. The Palazzo’s tower, the Torre del Mangia, was the tallest secular tower in medieval Italy. The tower was built to be exactly the same height as the Siena Cathedral as a sign that the church and the state had equal amounts of power.

We climbed the tower and I can attest that the 298 feet to the top seems quite high and the view is breathtaking. 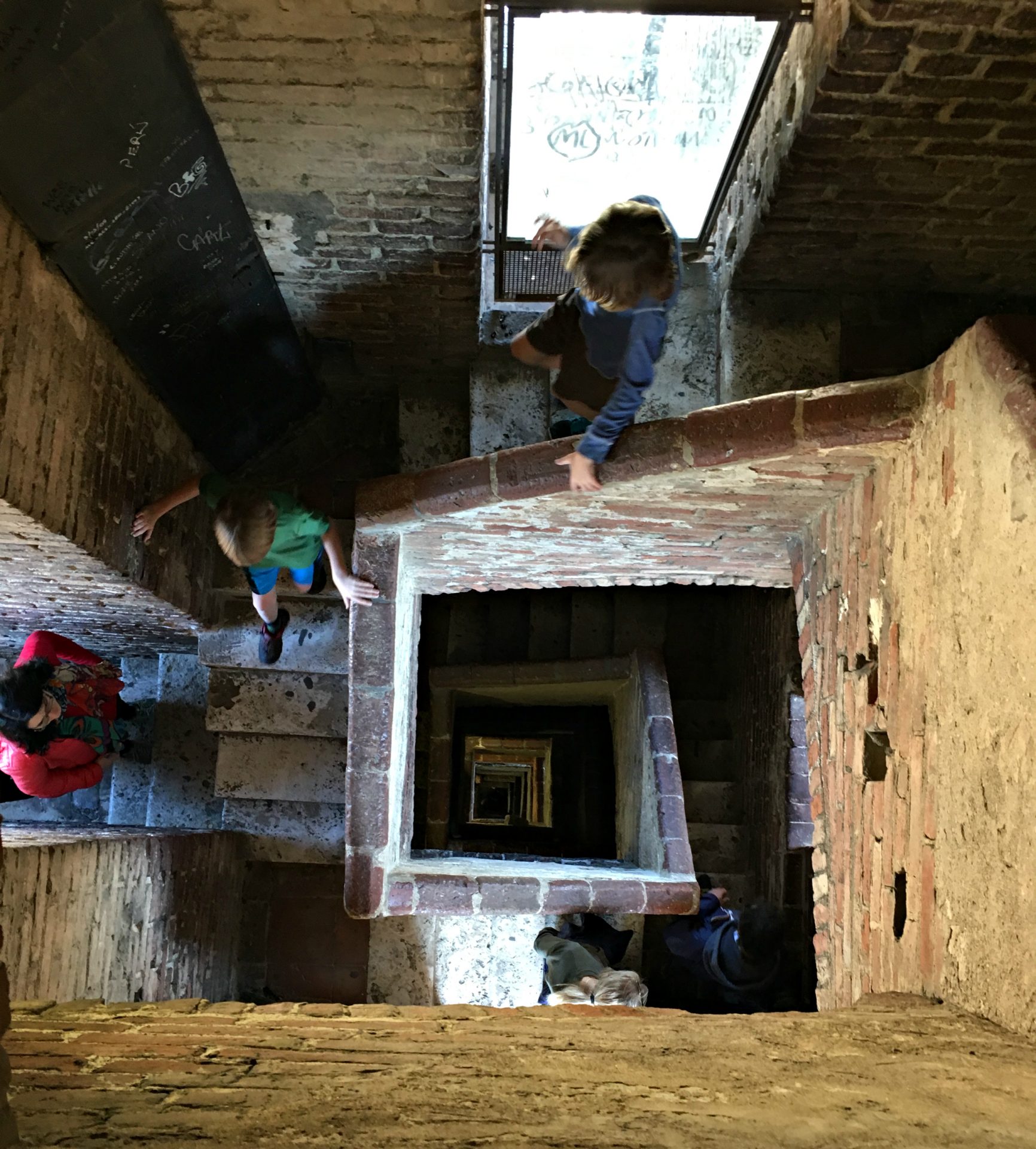 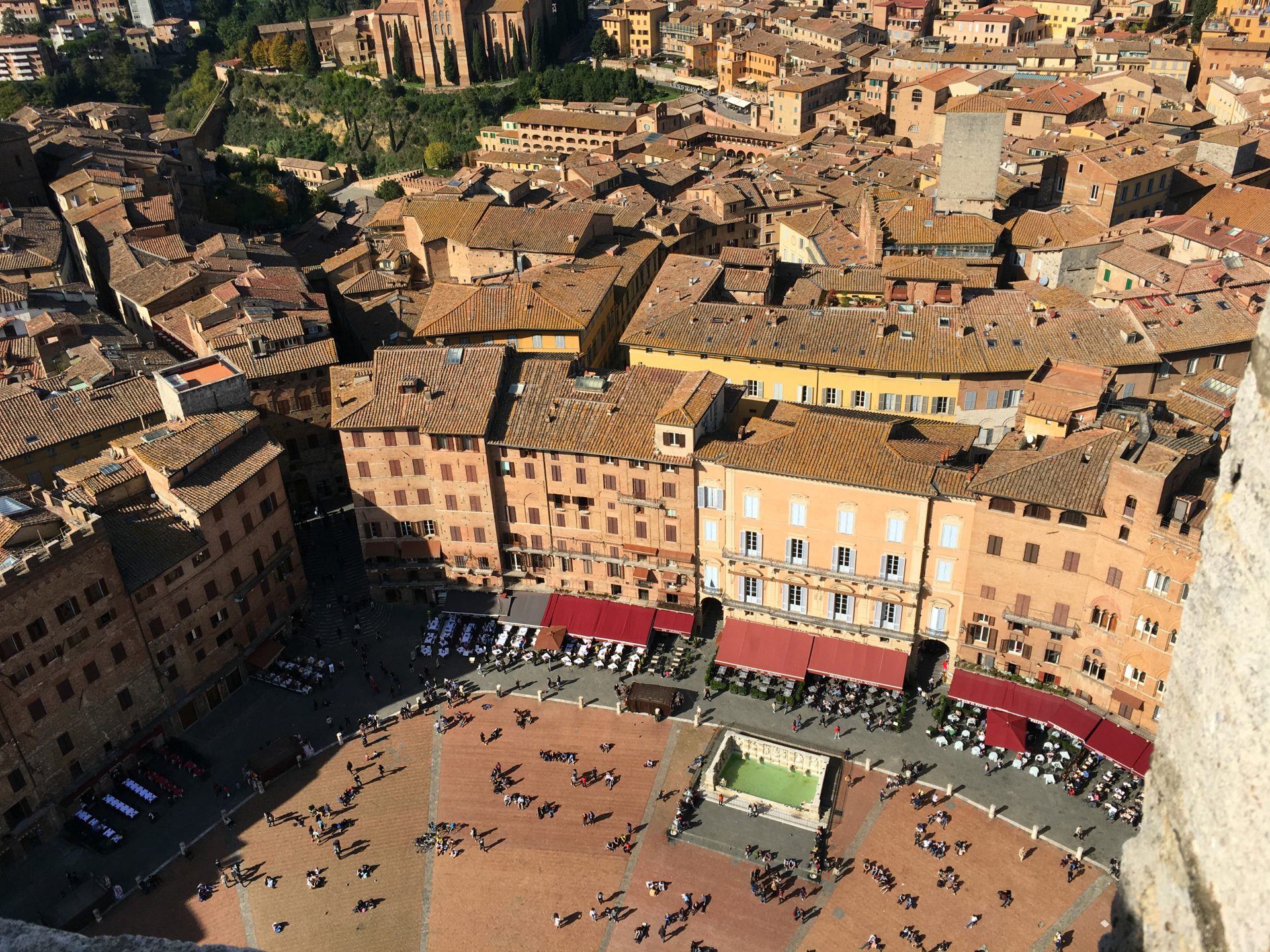 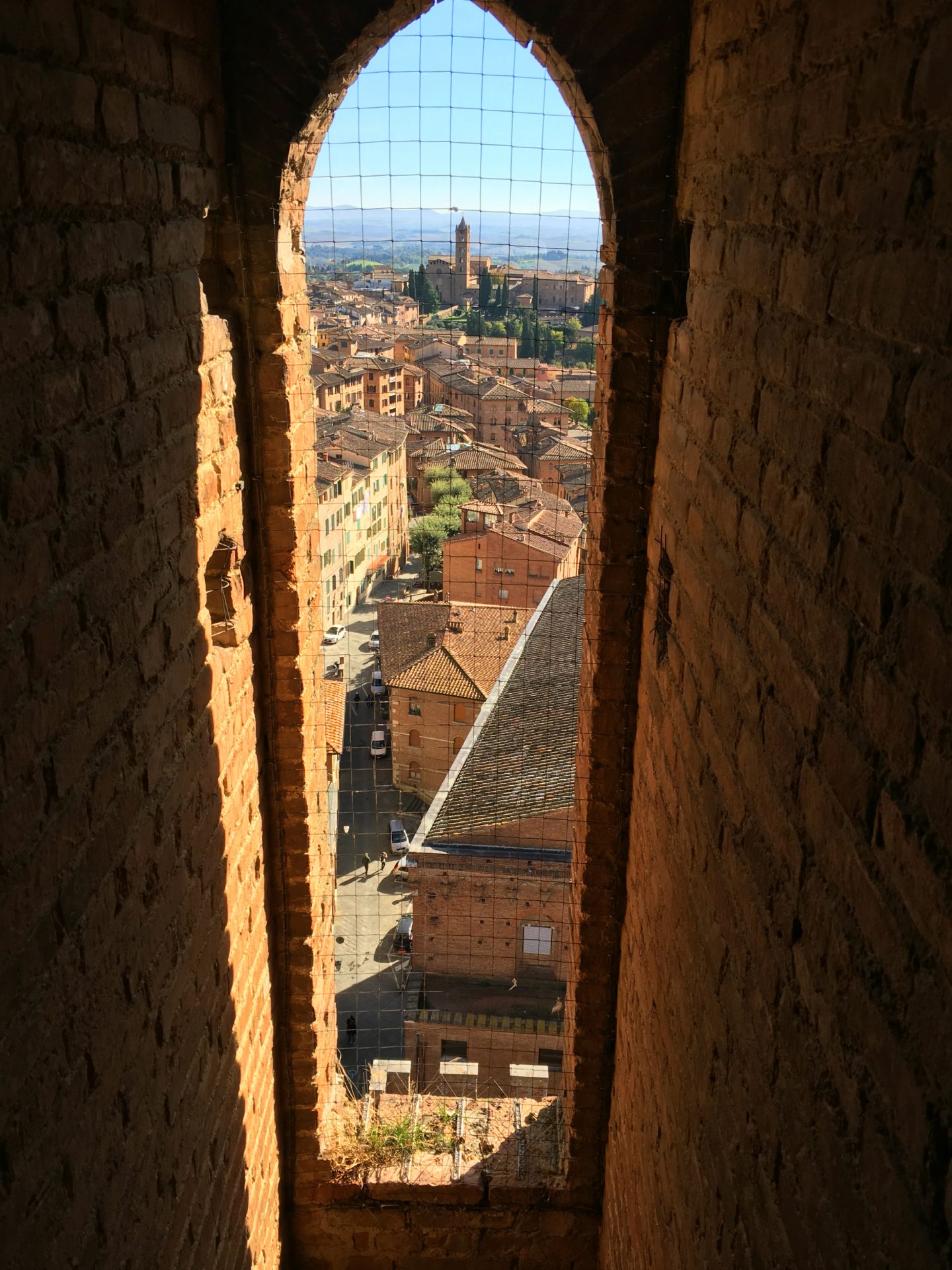 Surrounding the big part of the fan, at the top, are restaurants on the ground floor of tall, beige and yellow buildings. The rooflines here were all of equal height to represent equality of the three families that lived there. Building height in Italy is more important than I guessed. Big building = big man, I suppose. Or whoever is closest to God gets his rewards.

Around the edge of the fan is where the Palio di Siena horse race takes place each August. Anders and Finn ran the course and decided it was a lot of work. Despite that, they sprinted all over the place.

We picnicked on the piazza the first day and ate at a lovely, touristy, expensive restaurant on its edge the second day. I enjoyed both immensely. 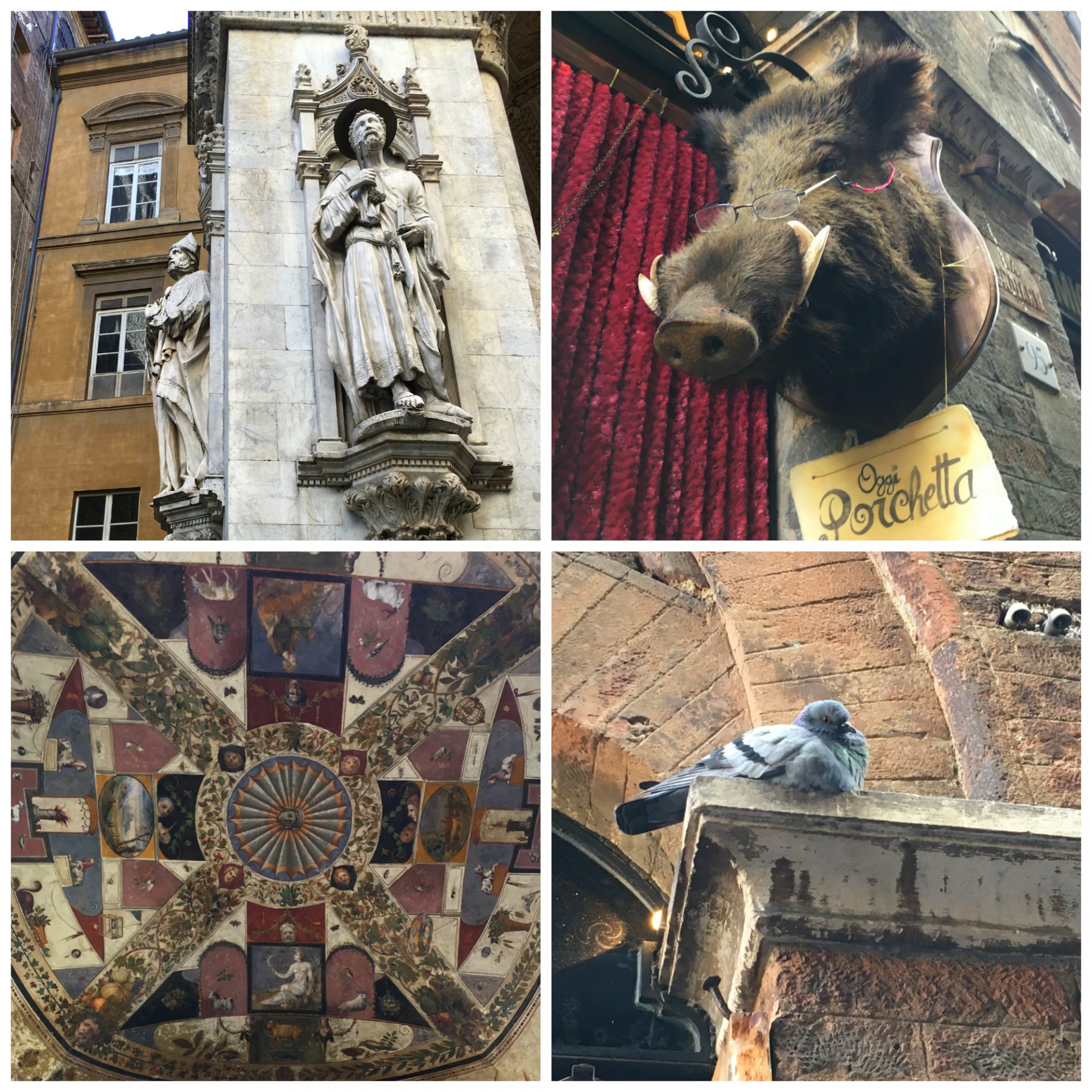 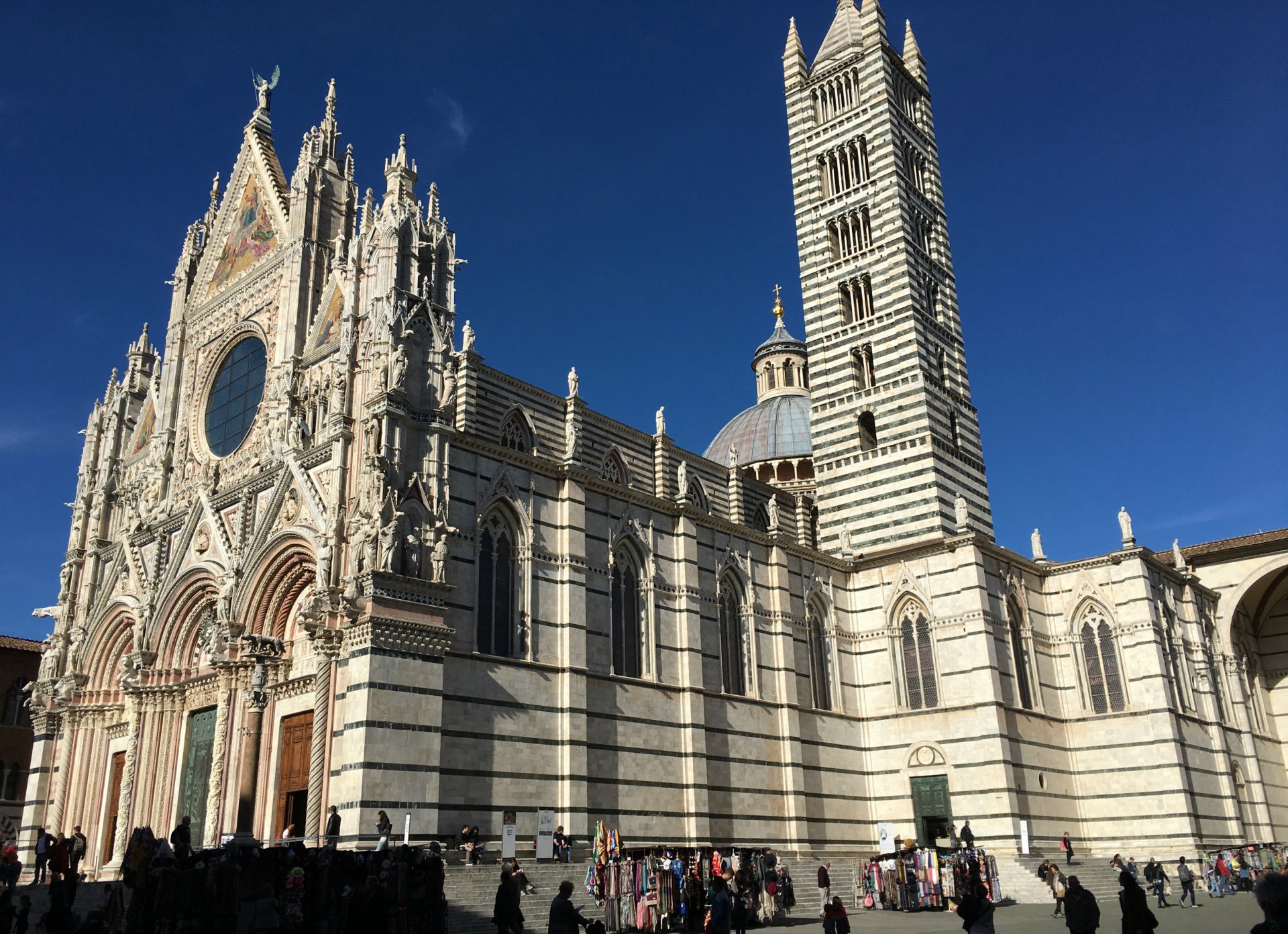 Mostly, we walked around town and took in the sights. The magnificent Siena cathedral with it’s flying cow and black and white striped tower, the flags and lights representing the different neighborhoods, and the many narrow streets, kept us entertained.

There is much to do and see, but we took it easy and wandered around.

Back at our lovely villa, we spent afternoons drinking wine and eating local cheese while reading overlooking the Tuscan countryside. It doesn’t get much better than that.

Now to find some porcinis to overindulge in! 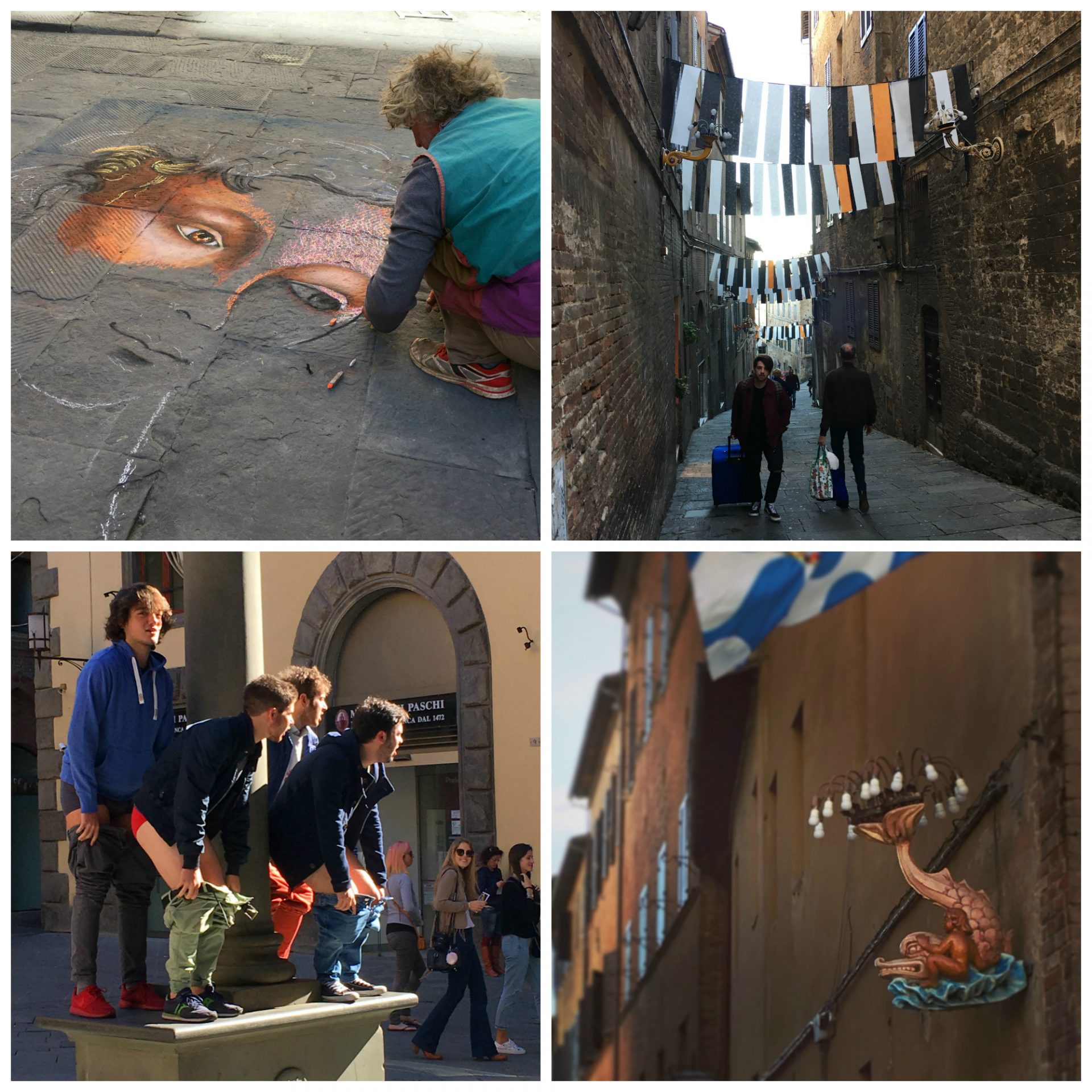 Why: Tour a hilltop town, visit piazzas, palazzos, and cathedrals

How: We stayed at Borgo Villa Rissi just outside of Siena. Highly recommend it!

Getting There: Take a bus, train, or car.