Hanging out with Henry has made me fall in love with techy gadgets (and him, of course!). I went from being a frustrated PC owner to a MacBook Pro-owning, Apple zealot.

We have two digital cameras (although one is kind of funky since it fell in the river when our canoe tipped a couple weeks ago) and a super fancy digital camera/ HD video thing-a-ma-bob. Since filmmaking is H’s vocation, he has all sorts of camera-related stuff.

Last year we each got Nooks for Christmas (which are awesome, by the way) and we buy most stuff online. It’s no secret that I love to blog.

Part of the reason I became such a tech enthusiast is that when something goes wrong, H can usually fix it for me. It might involve some frustrated sighs and cursing, but he gets the job done.

Lately, we’ve been coveting the iPhone. Since they aren’t available here (they have an exclusive contract with AT&T and AT&T doesn’t cover this corner of Montana) it’s been easy to put that desire on the backburner. 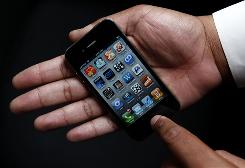 Now, we hear that starting in 2011, iPhones are going to be available with Verizon. Uh oh. We probably won’t get them since they are expensive and the monthly payment is slightly beyond what we can afford, but it’s fun to dream…

the applications are endless. I mean, “apps.” I’m cool.

Now some of you who have known me a long time are stunned. Is this the same person that loved being in the Wilderness and unreachable all summer? Is this the woman who put off getting a cell phone because she didn’t want people to call her too often. Yes. But people change and evolve.

I still don’t want to be reachable all the time, but from what I understand the iPhone turns off with just the push of a button.