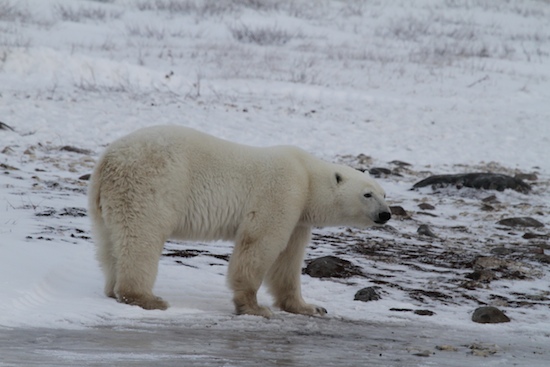 I’ve been back from Churchill, Manitoba, Canada, for a couple weeks, but I still haven’t posted photos of all the cute cubs we saw.

During the seven days I was in the Great White North, I spent two days on the Tundra Buggies. If all goes well, you don’t see bears in town, you see them out on the tundra. There was a mauling in Churchill the day before I arrived, and there were a couple nights we were woken by cracker shells as the polar bear police chased bears out of town, but I only saw them from the comfort and safety of 12-foot high vehicles.

One person I was sharing a house with had the clarity of thought to look out his window in the middle of the night when he heard cracker shells. He watched the bear police (in a truck) chasing a big bear down the alley across from our house. I slept on the other side of the house and wouldn’t have seen anything even if I was motivated enough to get out of bed and look.

I prefer seeing bears in places I am not walking around though, and was super lucky to witness lots of moms and cubs in the wild. Polar Bears International, along with Frontiers North Adventures and Explore.org hosted several people from the media the week I was there. It was Polar Bears Week and we wanted to get the message out that human caused climate change is putting polar bears in a very precarious position survival-wise. I went out with the NBC crew and a gang of scientists to see what we could find. 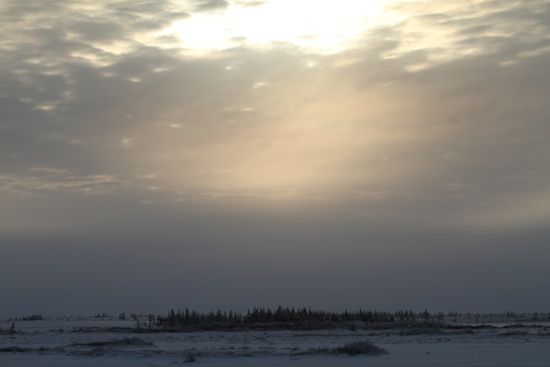 The light was amazing this day. The Western Hudson Bay can be pretty gray and dismal, so we felt lucky to have such photogenic weather. 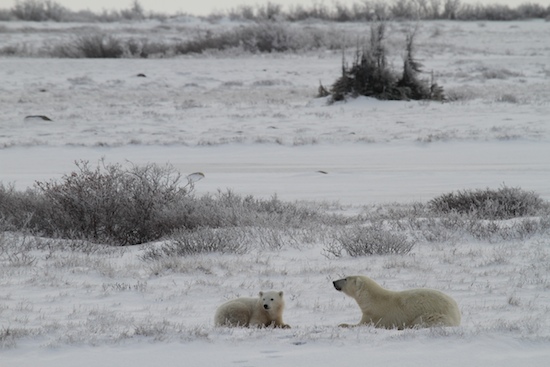 We saw four moms (and five cubs), including this pair. Longtime bear watchers on our buggy said it was one of the best cub-siting days in their careers. 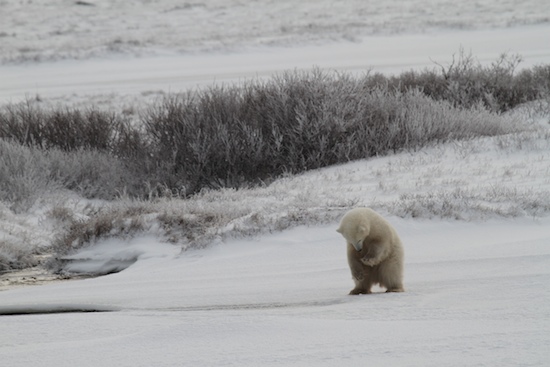 This playful coy (cub of the year) was trying to break the ice by jumping up and down on it. Eventually it broke a chunk free and sucked on it like a lollipop. 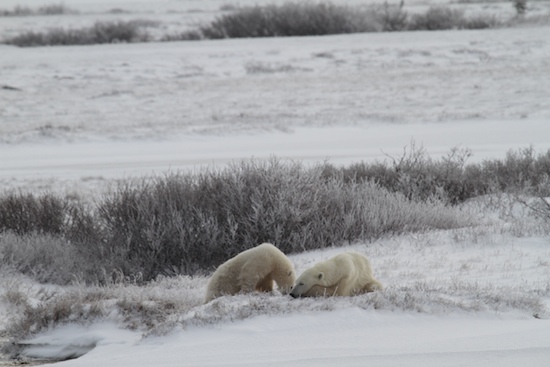 Then it was back to mom for a snuggle before more exploring. 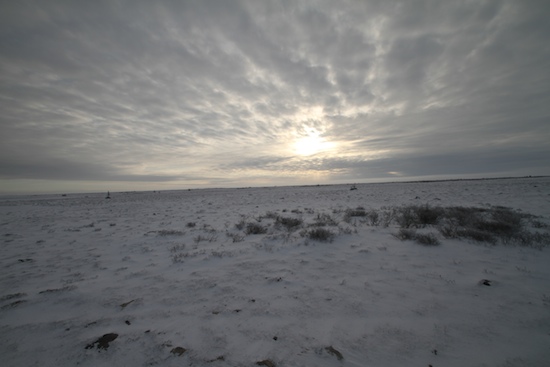 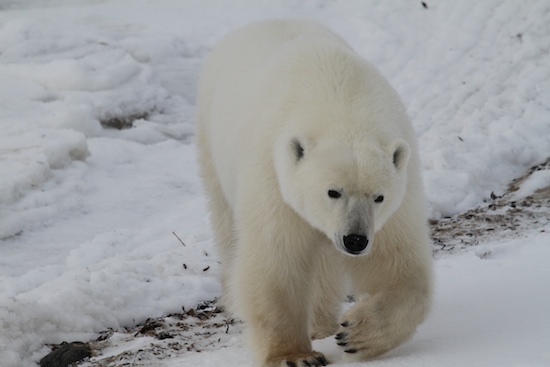 Even the cubs are pretty big at this point in the year. Not as big as mom, but they can fill up a camera lens. 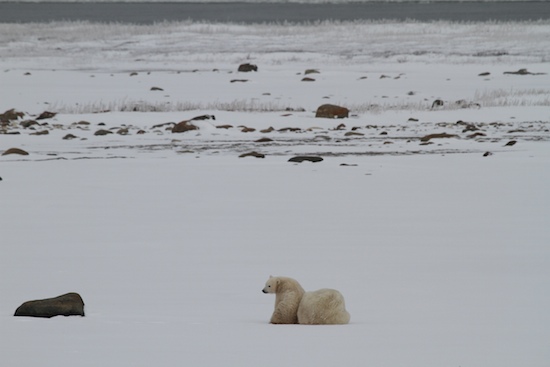 Another family group hunkering down and waiting for the ice to form on the bay. 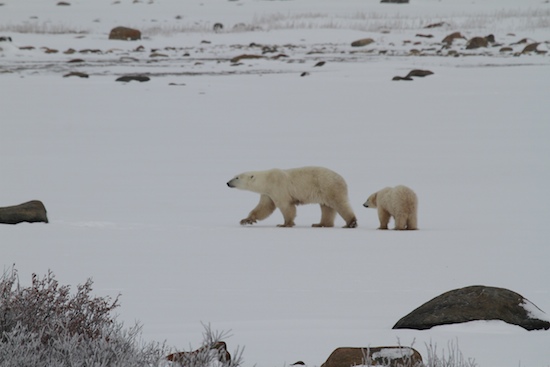 Cubs stick pretty close to their moms. Since hundreds of bears are gathering on the shore of the bay, the little guys need to be wary of the many big males in the vicinity. 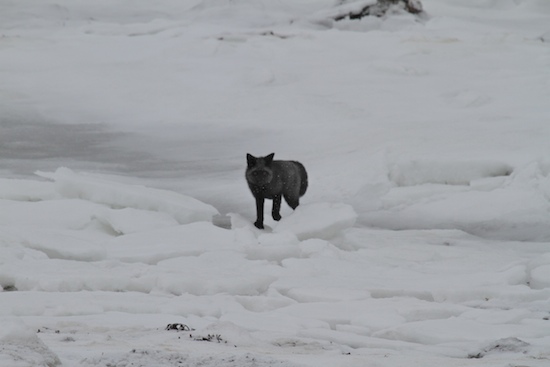 In addition to bears, we got to watch this silver fox play for a while. It’s cool seeing them until you remember that more red foxes (this is a color phase of a red fox) are moving into the smaller Arctic foxes’ territory. Just another fun effect of climate change. 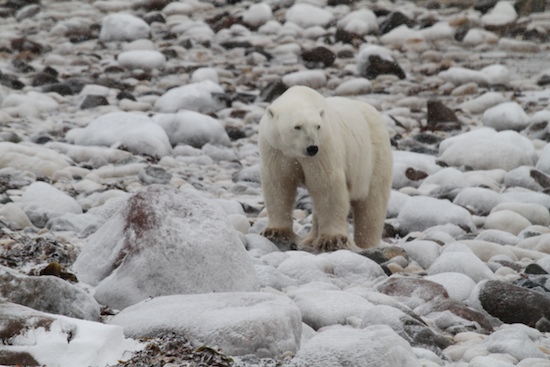 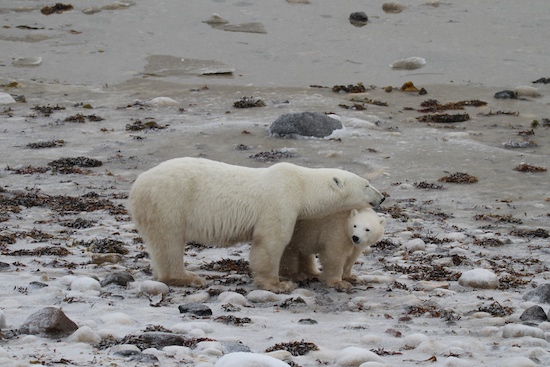 Maybe it’s just because I had two of my own cubs back in Montana, but seeing mom and cub cuddle up was just about the sweetest thing. 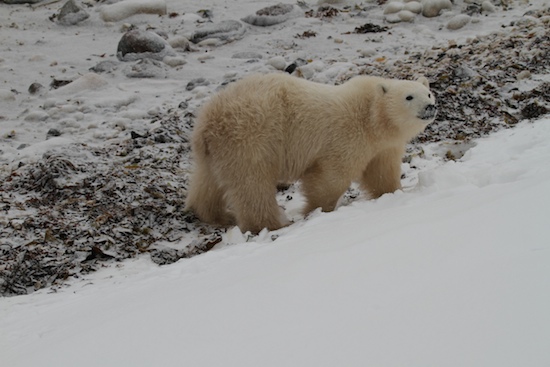 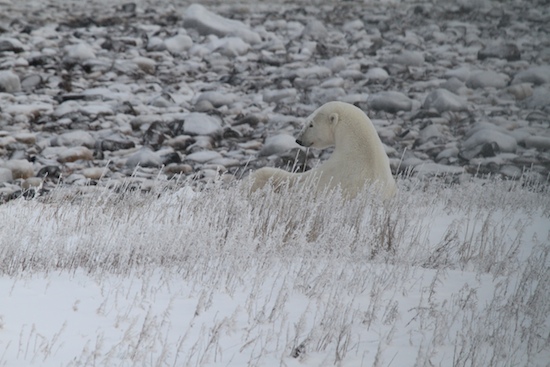 This mom was nursing her cub. Now that was an amazing sight. 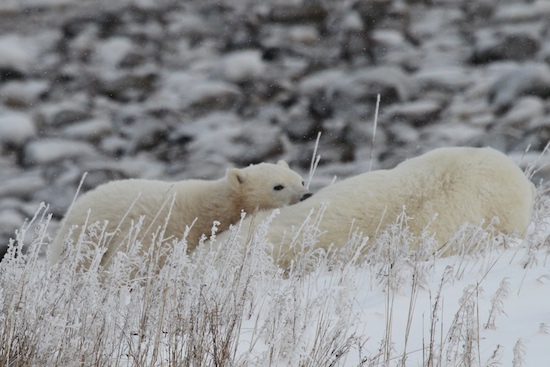 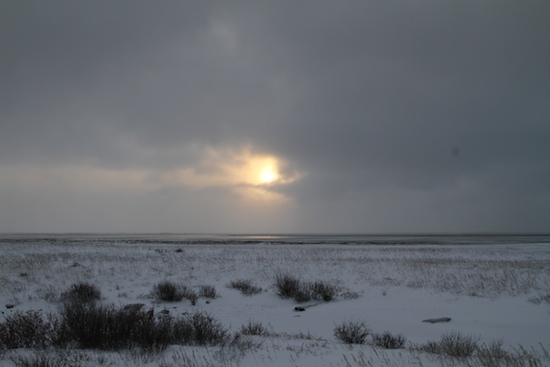 It gets dark early up north this time of year…

If you aren’t lucky enough to work for a polar bear conservation organization, you can still go to Churchill and see bears. All you need is money and a warm coat.

Frontiers North Adventures has knowledgeable and funny, friendly guides. They can set up your whole trip–from flights to accommodations to Tundra Buggy excursions. You can book day trips through them, or spend a couple nights out on the tundra in the Tundra Buggy Lodge. They also do beluga whale watching trips in the summer.

If you are more of a do-it-yourselfer, you can book flights from Winnipeg through Calm Air and stay at the Tundra Inn.

If you need a break from bears (what?) book a dog sledding trip with Dave at Wapusk Adventures. He’ll regale you with stories of gnarly sled dog races and share some of the history of his people, the Metis.

Be sure to stop in at the Eskimo Museum while you are in town. Over 850 high quality Inuit carvings are on permanent display. The exhibits include historic and contemporary sculptures of stone, bone, and ivory, as well as archaeological and wildlife specimens. I could spend hours there.

The Parks Canada/Wapusk National Park visitor center is also a must see when you are in Churchill. The small space is packed with natural and cultural history.