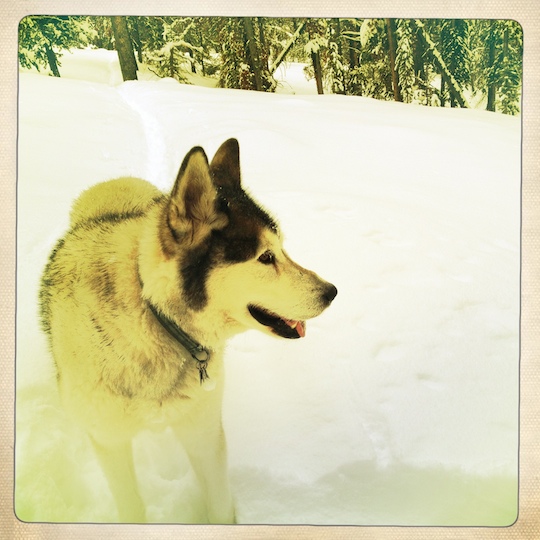 I clipped the tether into my dogs harness and then onto my own waist belt, pointed my skis down the snow-packed road and yelled, with gusto, Mush! A Malamute, this dog was bred for pulling freight through the snow. Im freight, were in the snow, whats the problem? Why is he looking back at me with disdain?

Ive seen border collies and Australian shepherds pull better than my Rigby. Ive seen mutts dragging skiers many times their size up the Bozeman Creek Trail. Ive shown my buddy the picture in the Malamute book of a dog just like him happily skijoring with his owner. Rigby was unimpressed.

So, I went back to the book and read about how to teach a dog to skijor. I had done almost everything wrong. The one thing I did do right is get suitable equipment for me and my dog.

The most important item to purchase is a properly fitting harness. If the harness is too big or too small, the dog is going to be uncomfortable or worseget hurt. Take the time to size your canine pal properly.

Next, youll need a tug line (the rope or tether that hooks onto the dogs harness and then attaches to you). A little bungee in the tug line eases the starts, stops and random jerks on your dog.

As a skier, you can wear a fat, padded belt around your waist (with a quick-release snap that the tug line attaches to) or hold the line in your hand. Some folks attach the tug line to a backpack or fanny pack waist belt.

What I didnt do right, was train my dog. I expected him to know instinctively what to do. As it says in Skijor with your Dog, If the dog screws up, its always your fault. What I should have done is started out having him wear the harness without pulling any weight.

Once he was used to the harness, it would be time to introduce a little light weight2-5 pounds. This way the dog gets used to pulling, but without having to work too hard. By pulling a sled with a backpack on it or a small tire while I walked next to him, he might have decided that pulling is good; pulling is fun. Trainers suggest keeping these sessions to 15 minutes and quitting before the dog gets bored.

Professional musher and dog trainer, Rob Greger recommends finding a narrow quiet trail without distractions and to start out on footnot on skiis. Attach a leash to the collar or harness and encourage the dog to run. Speed isnt the main thing; its to encourage the dog to run out in front. If you know someone with a dog who knows how to skijor, Greger recommends using their dog as an instructor. A dog who knows what hes doing can teach your dog a lot better than you can.

Greger thinks of training a dog to skijor in the same way as training a lead dog on a sled-pulling team. The hard part is teaching your dog to be a leadernot all dogs are going to do it. Without other dogs around to show the way or to read cues from, a skijoring pup has to be comfortable in the lead dog position.

Ideally, the dog should know some basic commands (See sidebar). Most dogs will know at least a few general commands already. Even Rigbywho was told at dog school that although smart, was unlikely to follow instructionsknows a few commands. The most important thing is to get your dog to stop when you want him to, and to not drag you off the trail into the willows.

Local skijoring enthusiast, Mary McFadzen did the right thing. When living in Boise she and her hound dog-mix (who she refers to as a Powder Hound), Koda, took a skijoring class. There they learned the basics of the equipment and some important commands. The dogs pulled tires around and practiced on a course without skis.

It was a really casual approach, says McFadzen, but one that seemed to pay off. She and Koda skijored for years around Bozeman. She used to skate ski behind Koda, since he was such a fast dog, That way he wouldnt be pulling so much, McFadzen remembers.

At 13, Koda is retired from the skijoring life, but McFadzen finds the commands they learned useful. When crossing the street shell tell him to hike, hike, or speed up. A long, low whoa can still bring Koda to a stop.

Rigby and I tried again. I still didnt follow the training instructions very well, but I let him run around with a harness on for awhile. Then I hooked him up to a sled with a small Christmas tree on it. I skied next to him, telling him how well he was doing, until he started running and dragged the sled off the road, tipping the tree into the snow. Maybe next time Ill do better.

Sidebar
A few commands all skijoring dogs should know. Teach one command at a time and dont move on to the next one until the first one is learned.

Whoa (stop)
Leash or harness your dog and walk along behind her. Say whoa in a long, low voice and pull back on the leash or tug line until she stops. If the dog doesnt learn this, you can always plan to snowplow or sit down to force the issue.

Easy (slow down)
Leash or harness your dog and run along behind him. Say easy in a long, low voice and pull back on the leash or tug line until he slows. Let up on the rope and pick up speed again.

Hike (speed up)
Leash or harness your dog and walk along behind her. Saying excitedly hike, hike, hike rush up behind her, forcing her to speed up.

On by (ignore distractions or go past a turn)
Leash or harness your dog and walk beside him. When passing a turn or other distraction (other dogs, kids etc), say on by and by pulling his collar, make the dog pass.

Gee and Haw (right and left)
Leash or harness your dog and walk along behind her. Just before you get to an intersection say the dogs name and gee. Walk over to the right where the dog can see you and pull the dog to the right, repeating gee several times. Do the same thing with haw and left turns. Make sure you know your right from your left before starting out.

Skijor with Your Dog by Mari Hoe-Raitto

This story was originally published in Carve, a special section of the Bozeman Daily Chronicle.
January 19, 2007