Since Henry is in Churchill and I spent a little time there in October, I decided it was time to focus on Arctic and sub-Arctic studies here at home.

For the rest of bear season, we’ll be studying polar bear (and other arctic animal) anatomy, physiology and behavior. We’ll try to better understand the Arctic and sub-Arctic ecosystems. We’ll be investigating the effects of global warming on bears and the rest of the world. And, we’ll be doing it all at a three and four-year-old level.

We started day one with a song and movement activity.

Then we read a few Arctic-themed books we have. We focused on how the authors described the bears and discussed what “descriptive words” are.

Then we came up with a list of our own words to describe polar bears.

Next was the art project. The boys painted snow on blue construction paper. While that dried, they cut out polar bears that I had printed out.

They glued the bears to the paper and added cotton balls to make them furrier. Finally, we wrote our descriptive words on the page.

This is what we ended up with: 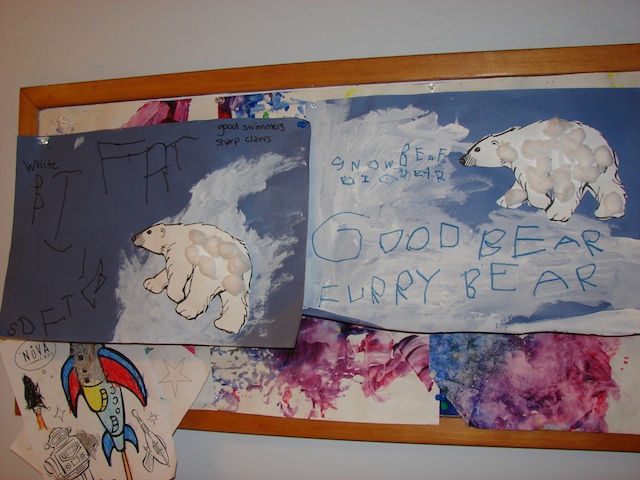 Since we have song writing momentum, I had the boys write songs about the Arctic.

We started by watching this video. It’s a pretty moving song about polar bears and their troubles. All of our troubles, actually. And you have to love a song where the writer works in “Milankovitch cycles.”

Then we read Baby Beluga by Raffi and listened to the song.

Once they were in the mind of music making they wrote these songs.

…I don’t know why they both sang about cheetahs.