It’s been a big year for little Anders and on January 30th he turned 2 years old.

Anders had a lot going on this year. Here are a few of the things he did.

 walked (technically, he started a few days before his 1st birthday)
 traveled to the southern hemisphere on our trip to Argentina
 started sleeping through the night, most nights
 learned to feed himself
 rode in a car, plane, bus, train and behind a bike and skis
 went hiking and cross-country skiing
 learned to talk
 waded in the river
 became a big brother
 recited his ABCs and counted to 10 (many, many times)
 insisted on hearing me sing Old McDonald a zillion times
 soaked in several different hot springs
 rode a horse
 started using the potty
 drew, colored and painted
 played at the park
 giggled like crazy
 smiled in a way that can melt your heartor at least mine
 went to birthday parties
 played at the Childrens Museum and Museum of the Rockies
 went to friends houses
 hung out at coffee shops
 swam
 entertained his brother
 entertained his parents
 grew more teeth
 grew out his hair
 wore 3 sizes of clothing
 played in the snow
 threw the ball for Diesel
 pet Rigby
 watched the train
 played with grandparents, his aunt and uncle and cousins

On Friday morning, Anders awoke to find the living room filled with new toys from his generous gaggle of grandparents. He got so many gifts that H and I just got him a couple puzzles.

He played for hours, then we went to Chadz–one of our favorite coffee shops–for a birthday lunch. Everyone in the cafe sang “Happy Birthday” to him. 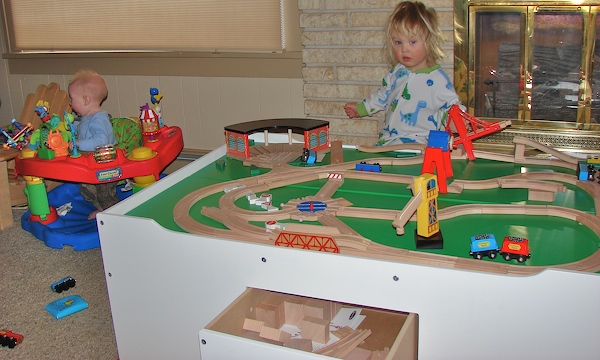 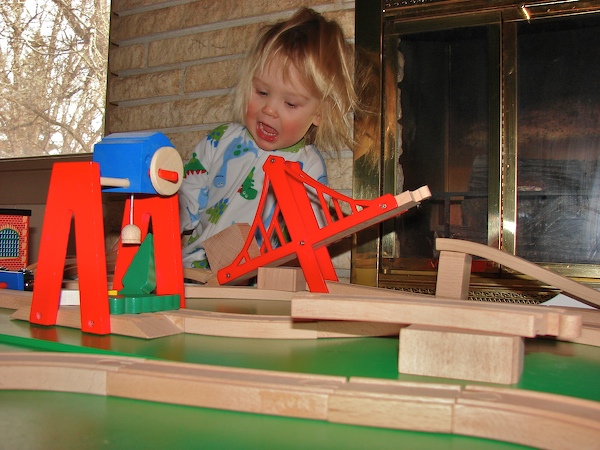 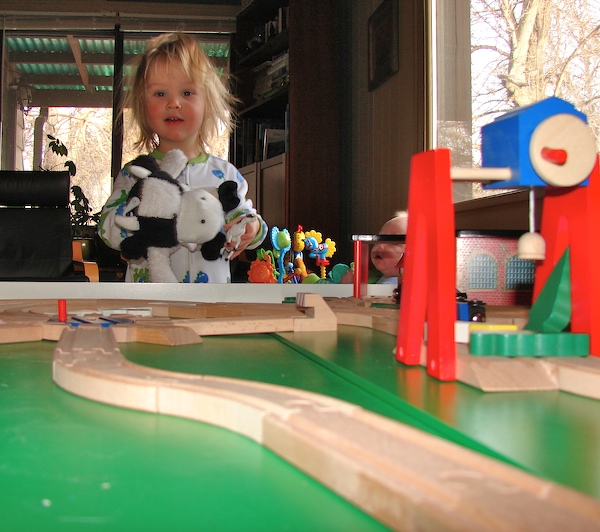 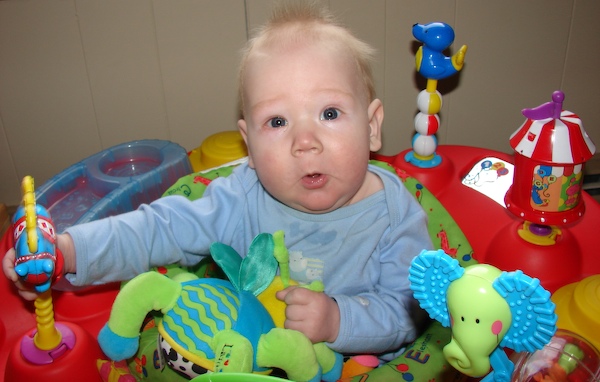 Finn is not so sure about this birthday thing. 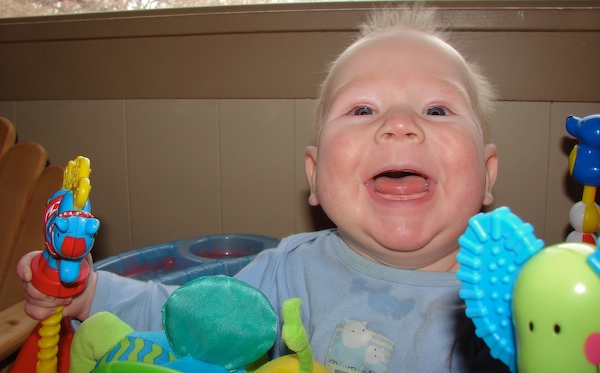 Oh wait, he loves it! 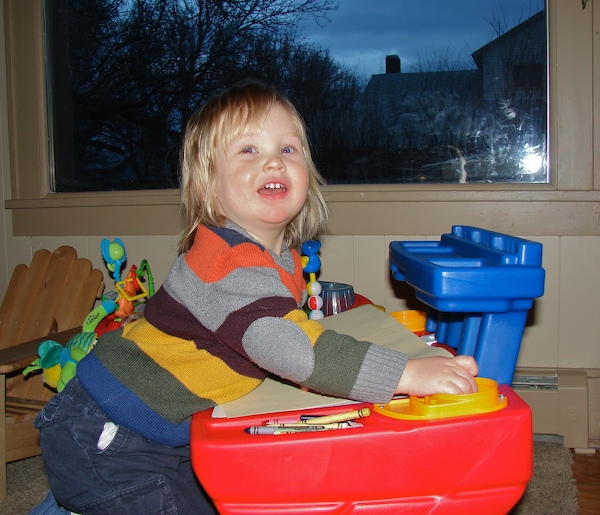 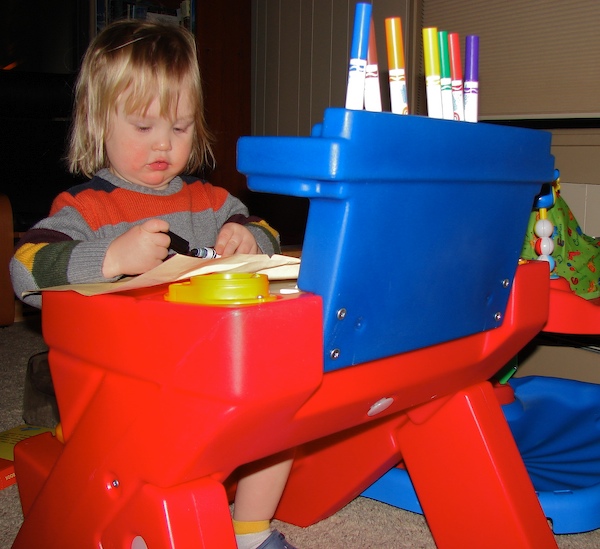 On Sunday, we hosted a birthday party at Chico. We strategically planned it to start at the same time as the Super Bowl so we’d have the Grille to ourselves. (OK, we didn’t know when the Super Bowl was when we planned the party.)

After soaking in the hot springs pool we had pizza and cupcakes. Then all the 1.5-4 year-olds used their cupcake energy to run laps. Like I said, good thing the Super Bowl was on and the Grille was empty except for us (and one poor couple…). 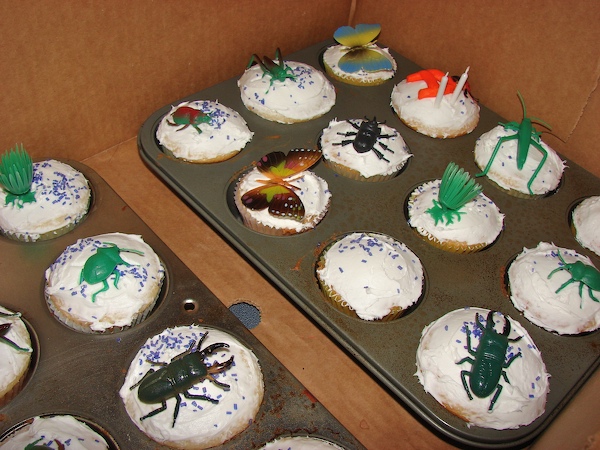 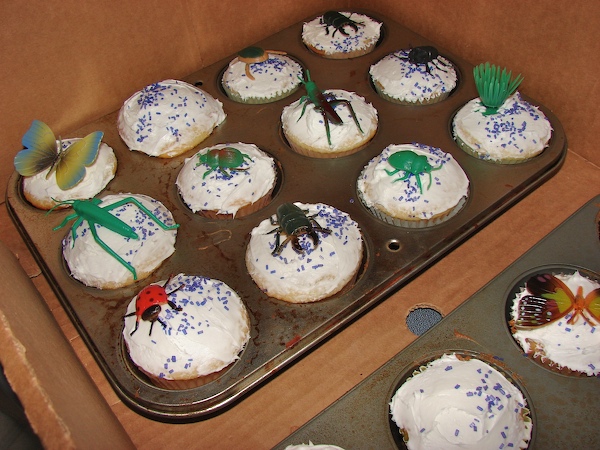 My mouth is watering just looking at this picture. 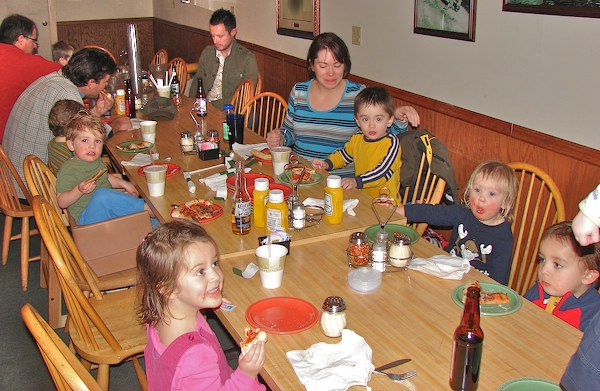 Some of the party crew at Chico. 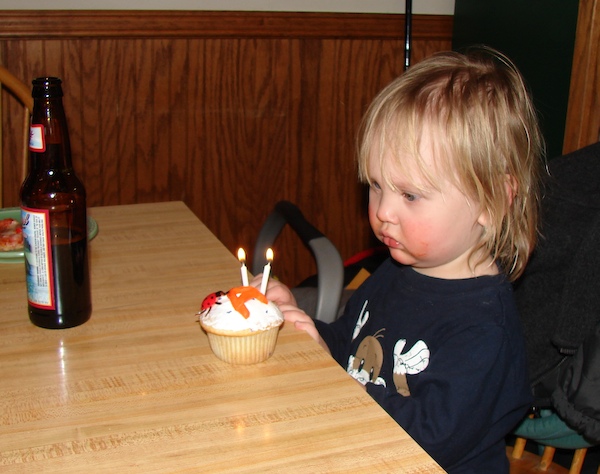 Anders stares at his cupcake while we all sing. He got very serious when the focus turned to him. 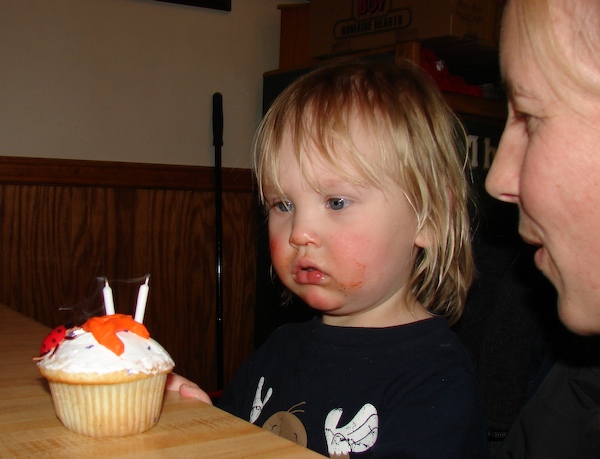 A little help to blow the candles out. 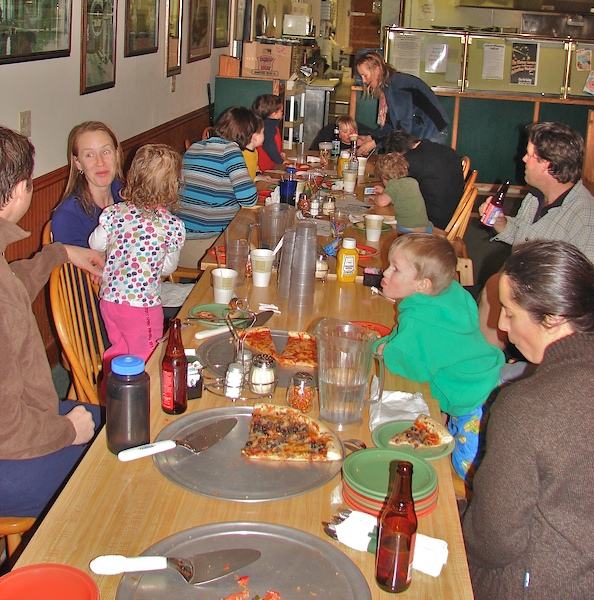 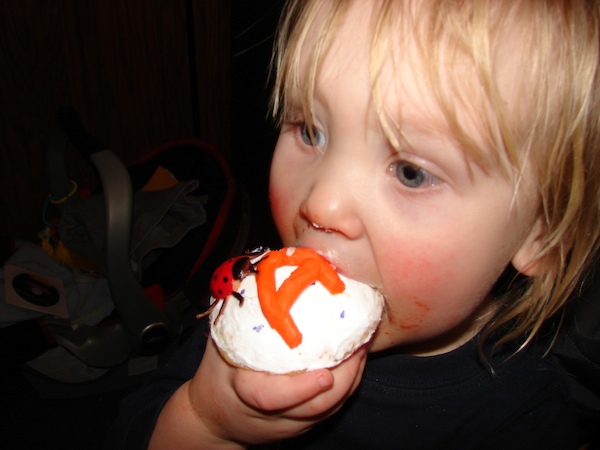 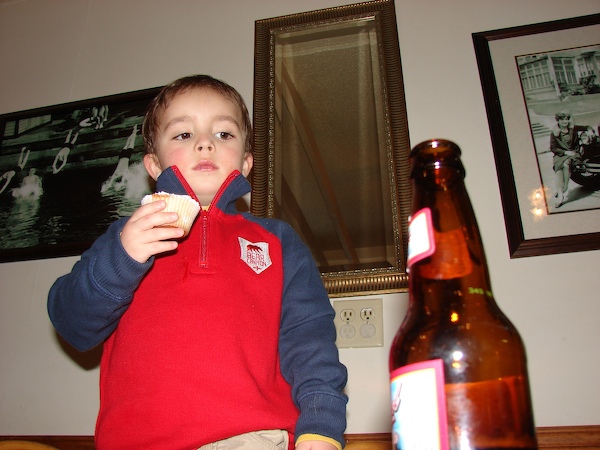 “I’d rather have that beer than this cupcake…” 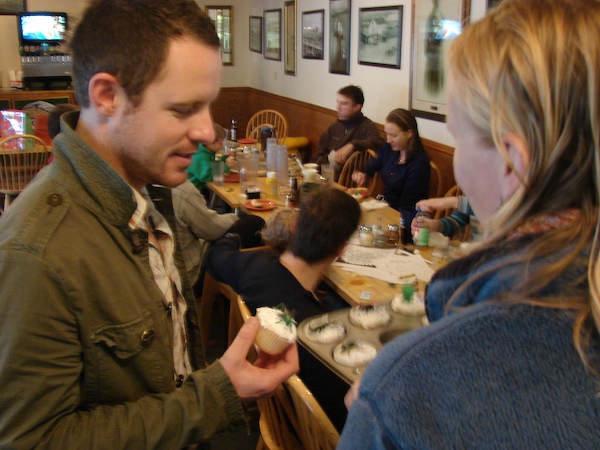 For an Australian, George sure looks nervous about eating a bug. Don’t they do that all the time Down Under? 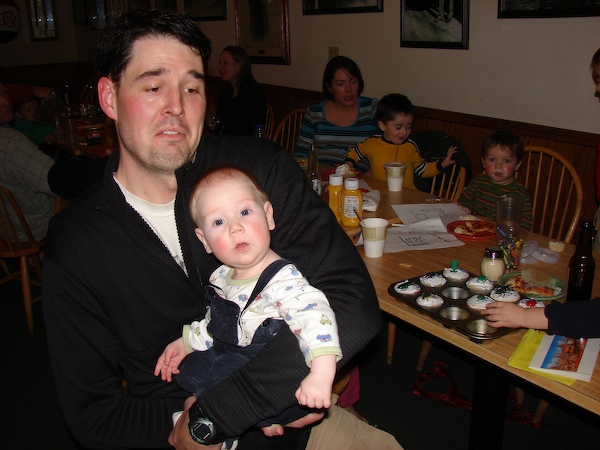 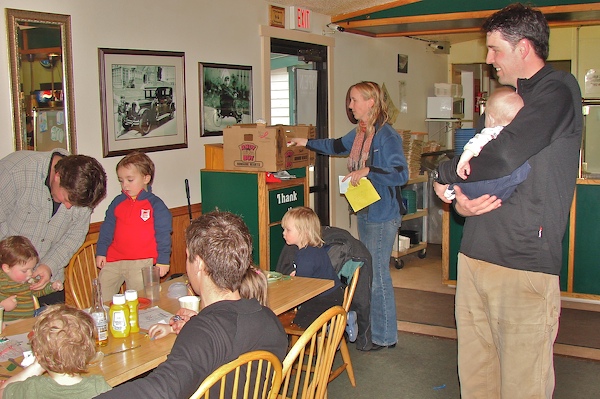 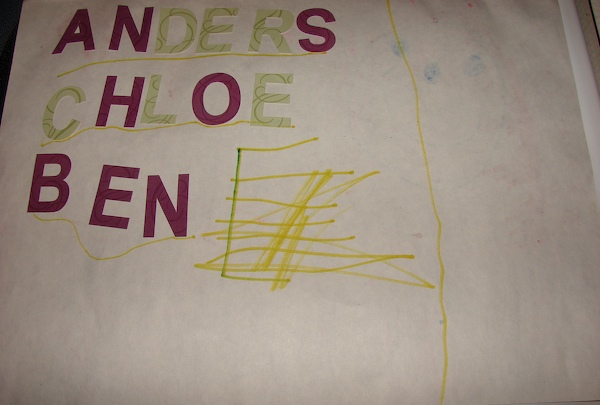 Handmade card for Anders from Chloe and Ben. 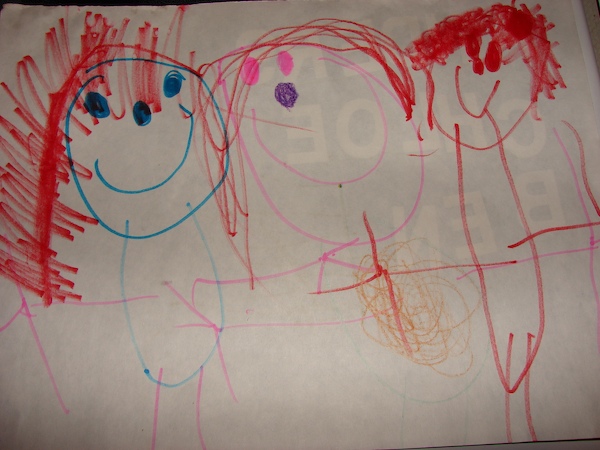 Other side of the card. That’s a picture of Chloe, Ben and Anders. 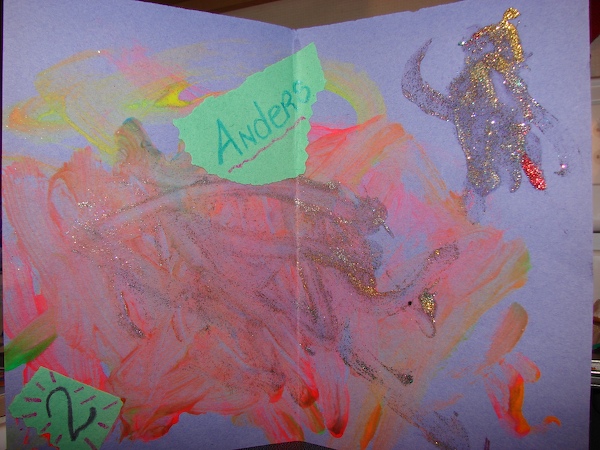