Last weekend, Anders and I went backpacking. It was the four-year-old hiker’s first backpacking experience. He’s hiked, he’s camped, but this was a whole new game.

I know a lot of people backpack with babies, but since ours are just 18 months apart I could never figure out the logistics of carrying two kids and four people’s gear. And I was definitely not backpacking with a baby while pregnant.

I haven’t been backpacking since before I was pregnant with Anders and was very excited to get into the mountains. I promised Anders that when he could reliably hike 5 miles, we’d go. Well, that happened last November, but between then and now there has been way too much snow.

I chose the West Boulder for our first trip since it is just 35 minutes from here and the hike in is only three miles. I wanted to be able to bail if we needed to. 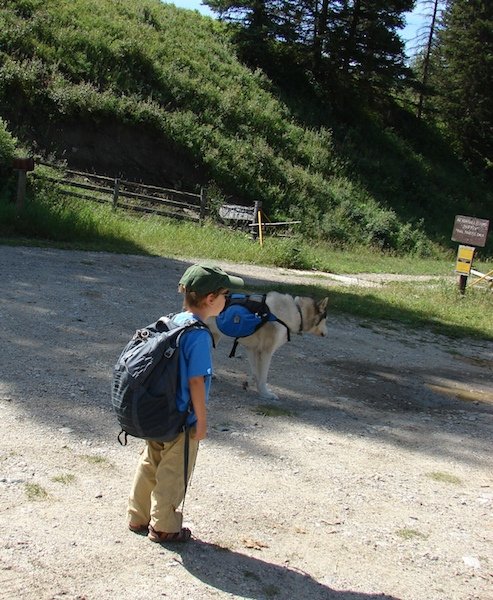 Ready to hit the trail with a four-year-old boy and a ten-year-old dog. 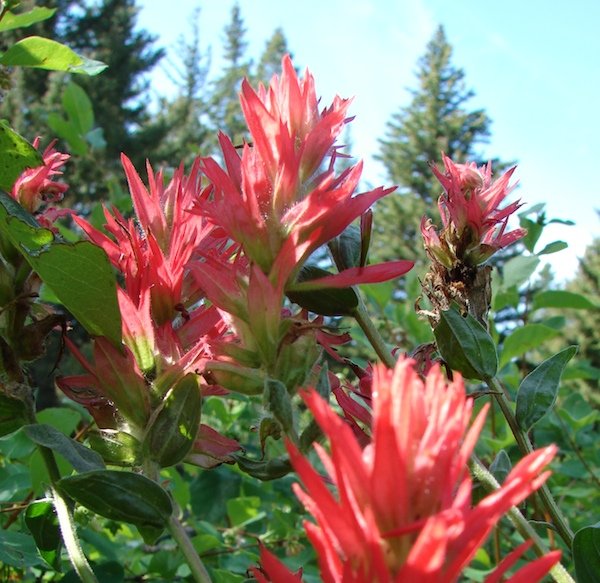 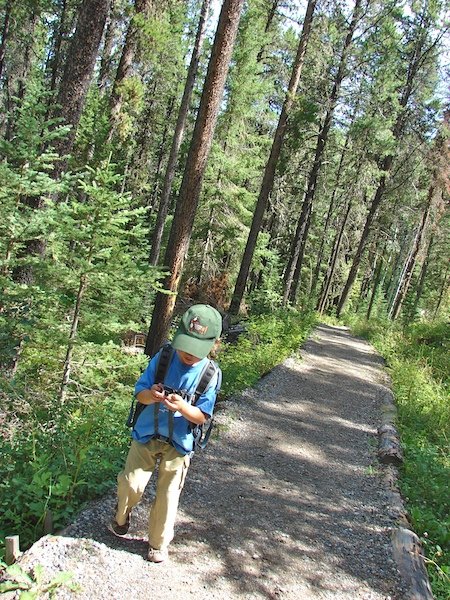 Hiking and playing with his backpack. He used my daypack to carry his clothes, water and a couple books. 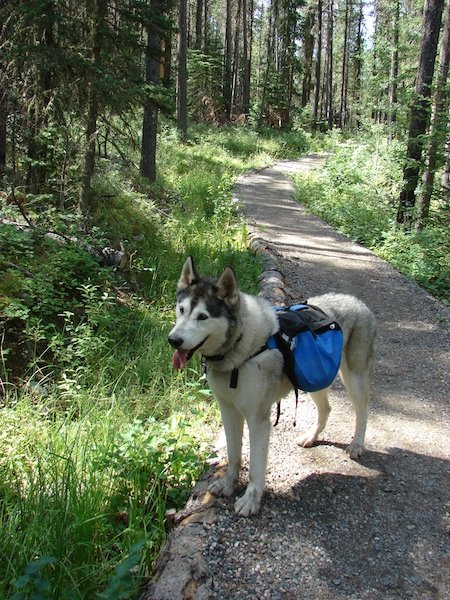 Rigby carried his food and the water filter. Everybody gets to help. 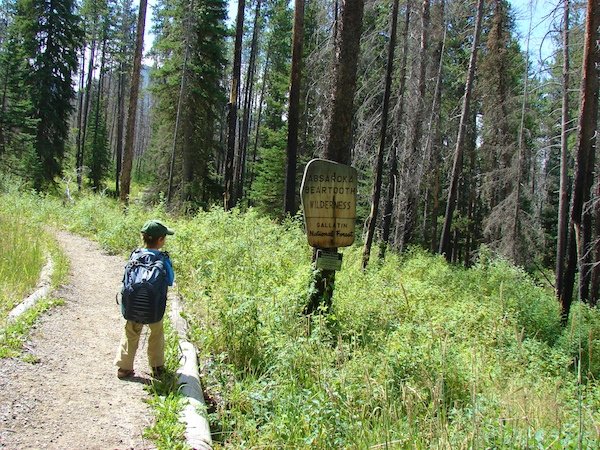 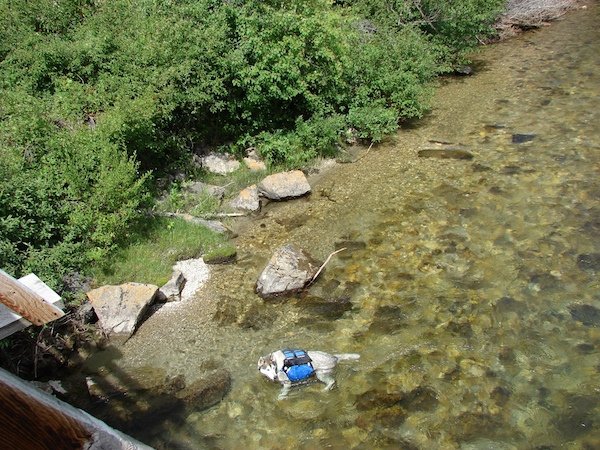 Rigby started out on the other side of the river, got caught in the current and pushed over to this side. Then he couldn’t get up the slope since he is so old, so he had to swim back across the river. He was more work than Anders. 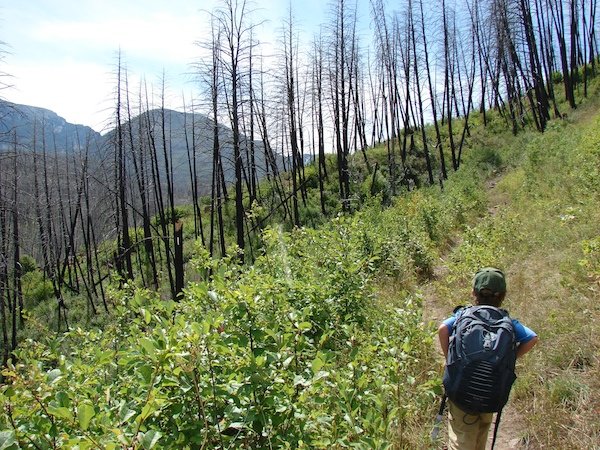 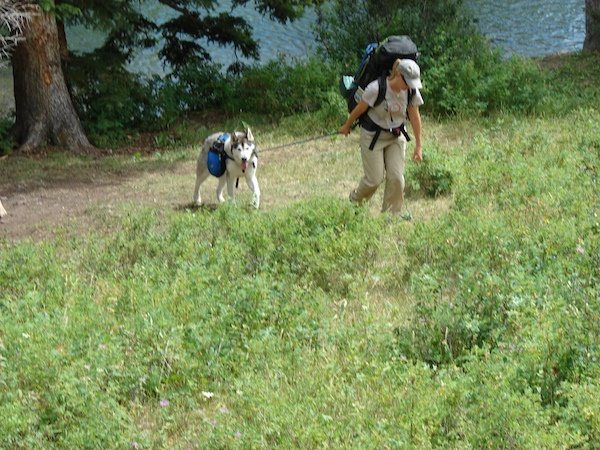 Rigby ran off to greet some anglers and had to be persuaded to come back in a timely fashion.

The spot is gorgeous. A lazy river running through a huge, long meadow. The mosquitoes were ridiculous. As soon as we got there we set up the tent and jumped in. I even made Rigby join us for awhile; his snout was swollen with bug bites. 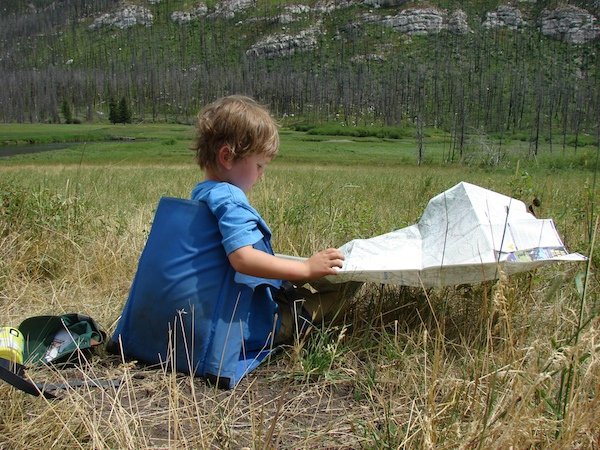 Anders checks out the map and has a snack while I set up the tent. 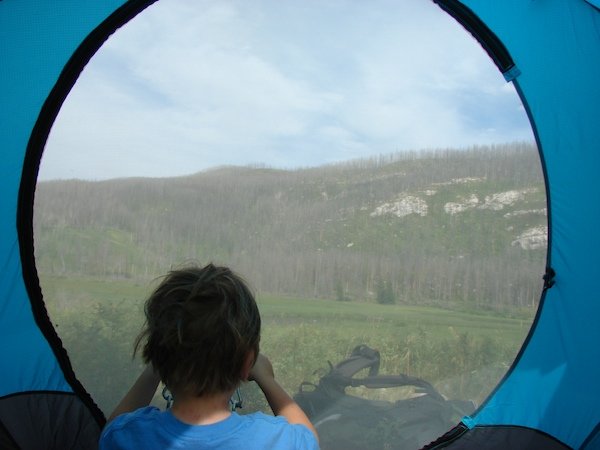 Our view for most of the trip. 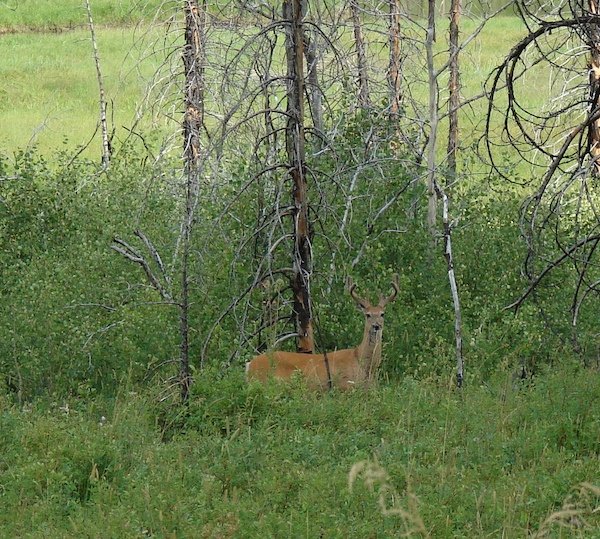 A couple bucks walked by while I was cooking dinner. Rigby didn’t even notice–more proof he is getting old. 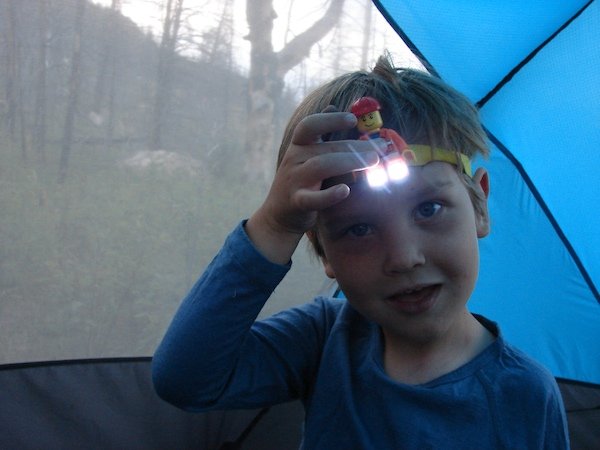 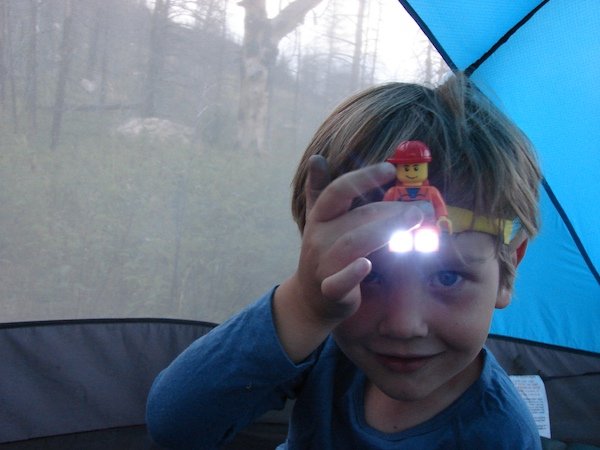 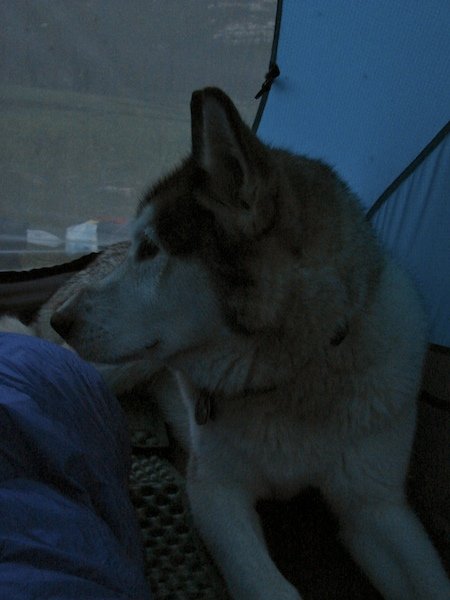 Not psyched to be in the tent, but at least he wasn’t being bit.

We made one journey out to jump in the river. After about two minutes I made Anders put his clothes back on because I couldn’t keep the mosquitoes off him. Back to the tent. We read books, made up games with tent stakes and tried to count the mosquitoes on the netting. Other than a bathroom trip to two, setting up the bear hang and cooking dinner (me only) we stayed there until the next morning. Even when I left the tent in the middle of the night I came back with bites. They were voracious.

In the morning I gave Anders an energy bar–no warm breakfast that day–and told him we were going to have to make a run for it. In full rain gear we packed up the tent and our packs in record time and hit the trail. 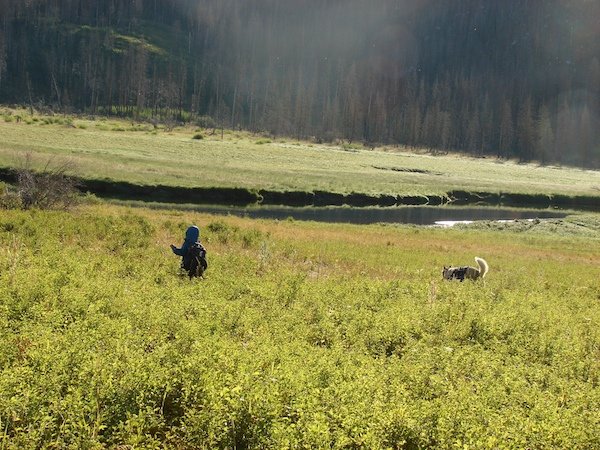 We make a break for it. 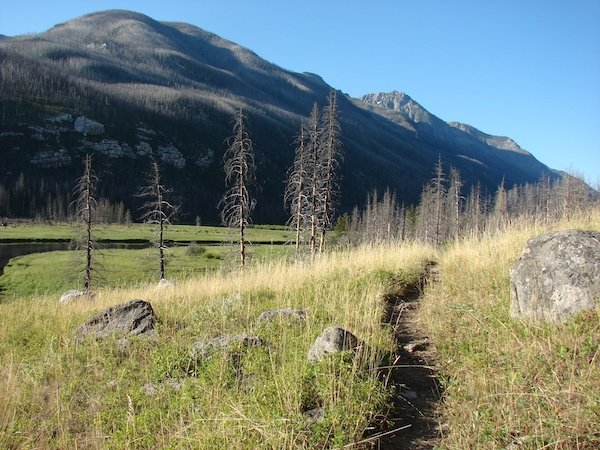 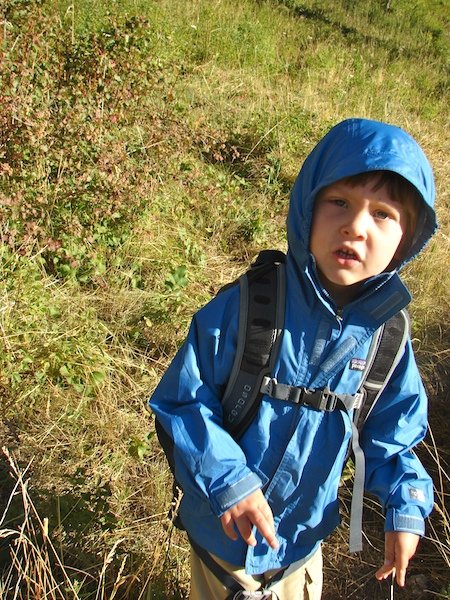 No, it’s not rainy or cold… 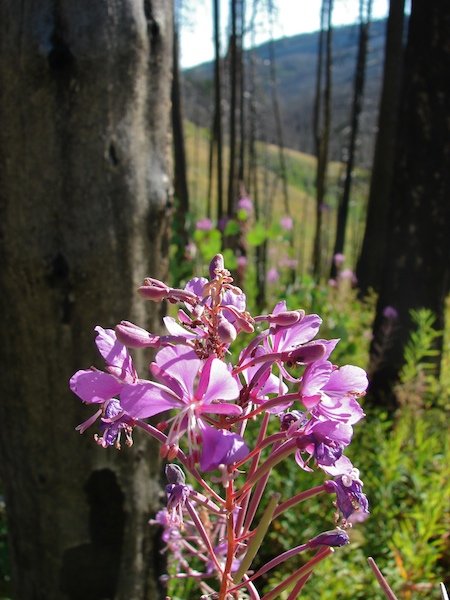 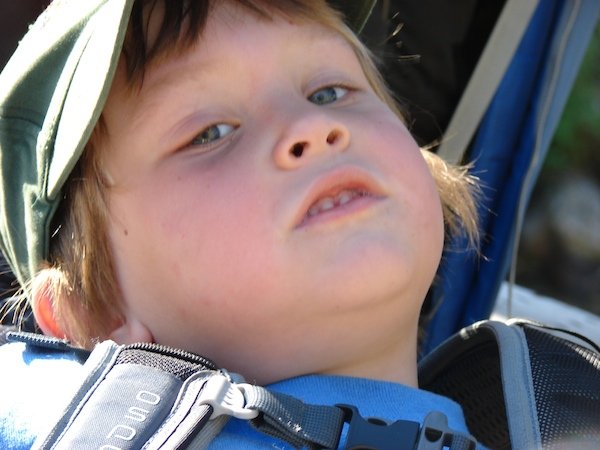 Taking a rest on a bridge. Note his swollen right eye.

It wasn’t the best backpacking trip, but I am so glad we went. We proved that I could carry almost all our stuff (thanks to Finn’s training regimen), Anders was comfortable sleeping in the backcountry and that we could survive a little adversity with mostly good attitudes. If it had been a perfect trip, we might be disappointed next time. Now we know we are tough.

A couple days later Henry took the boys to a coffee shop and was talking to our friend, Rob.

Rob: The mosquitoes really like me, too. Do you know why they bite us?
Anders: Why?
R: Because we are so sweet.
A: No, it’s because they need the protein in our blood to lay eggs.

So, the trip was educational, too.

Can’t wait to read about other times I’ve been attacked by mosquitoes? You don’t have to.