As Henry, Anders and I drove from Gardiner to Mammoth a couple weeks ago on our trip to Driggs and Jackson, I noticed that the sign for the 45th parallel had moved.

The 45th parallel is an imaginary line that circles the globe at the point halfway between the equator and the North Pole. This same line passes through Minneapolis-St. Paul; Ottawa, Canada; Venice, Italy; and the northern tip of the Japanese islands. In most of Yellowstone, it is slightly north of the Montana-Wyoming border.

The sign has always (as long as I’ve been going to Yellowstone) been located at a bridge crossing the Gardner River and at the Montana-Wyoming border. 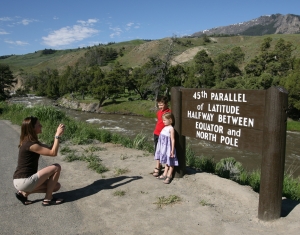 I guess that really isn’t where the 45th parallel is, so the Park Service moved the sign to a location closer to the real 45th parallel. It’s still not in the right place, but it is closer and at a better location for pulling over and taking a picture.

From the Park Service:

Using GPS technology and keeping safety in mind, the sign has been moved nearly a mile north to a small parking area that will provide not only a much safer, but, as it turns out, also a more geographically accurate location. While placement on the exact site where the 45th crosses the road was not an option, it is now within approximately 1200 feet of the correct position.

Contrary to popular belief, the majority of the Montana/Wyoming state line does not follow the 45th parallel through the park. The Entering Montana and Entering Wyoming signs will stay in their current locations near the Boiling River parking area.

(Sidenote: If you are in Yellowstone, it is NOT OK to stop in the road. You wouldn’t stop on a Federal Highway anywhere else. So, find a pullout, pull completely off the road and gawk at elk from there. Even if you have an R.V.)